Rhinestones and their Shining History 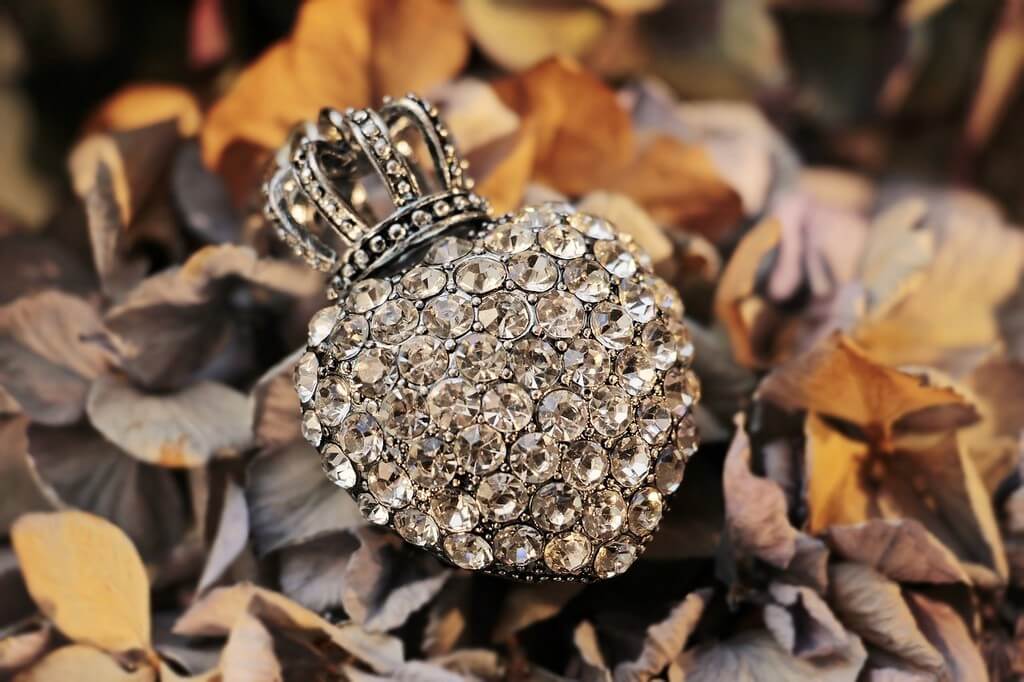 Rhinestones have a glittering past.  Originally rhinestones where referred to Czechoslovakian glass or Bohemian glass dating as far back as the 13th century in Bohemia and the Czech Republic.  Both have a could be hand-blown glass as well as moulded and cut glass.  By 1918 glass was no longer limited to functional items. The Czechoslovakian glass began to make its appearance in dazzling and brilliant jewellery.  However, the term Rhinestone was coined when rock crystals which were discovered around the River Rhine in Austria.

The manmade Rhinestones are extremely refined glass.  By using various metals, the glass was coloured to the desired shade.  It was then pressed into moulds. Each stone was then ground and polished by machine, resulting in a brilliant glass stone.  Often the stones were foiled on the back which increased their brilliance. Whereas the rock crystals do not need to be treated to create sparkle. The crystals themselves are naturally endowed with imperfections which lead to the bouncing of light to create a stunning effect. The popularity of the natural crystals’ resources led to its eventual scarcity which led to the creation of artificial gemstones that duplicates the look of rhinestones. 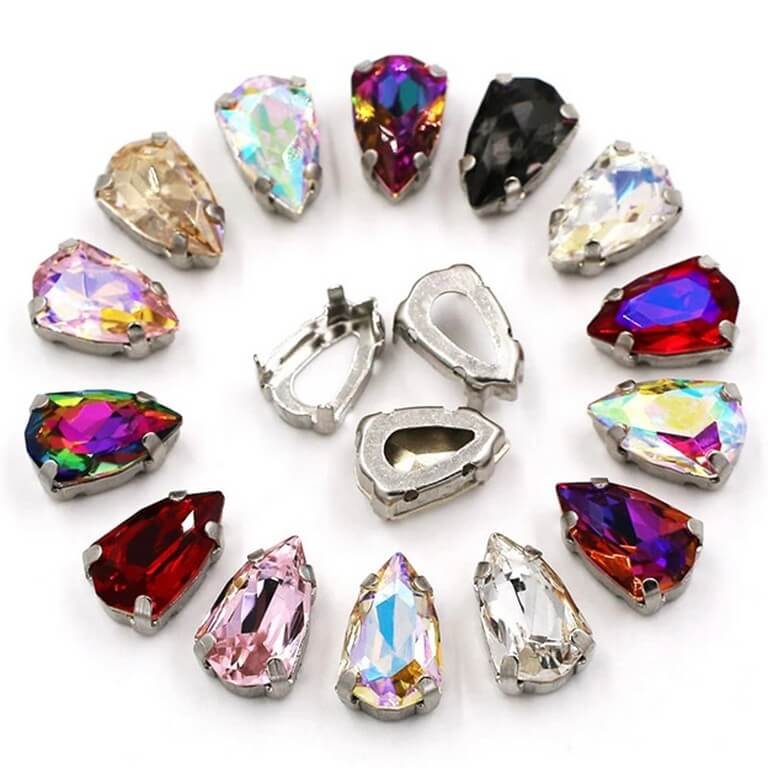 Rhinestones are referred to as paste. Originally paste was referred as glass stone as it was made of ground glass which was moulded and then melted, producing an opaque dense glass frosted stone.  Paste had many air bubbles and swirl marks. The high lead content glass was then polished and faceted, and set on either copper or silver resulting in a brilliant stone.  Today the term paste refers to rhinestones.

With the creation of new glass cutting machine by Daniel Swarovski in 1891 revolutionized the jewellery business.  The machine could cut faceted glass with fine finishing in a short span of time, which prior to the invention was a tedious task due to the time taken to hand cut each stone. The next disruption created by Swarovski was vacuum plating the backs of the stones with silver and gold, reducing the need for hand labour. To this date Swarovski rhinestones are recognized as the highest quality in the industry.

Rhinestones have been known to be incorporated in costume jewellery for hundreds of years. It is used to enhance and accent, and often times they would be the sole stones in an entire design. During the Victorian period jewellery motifs like snakes, flowers and hands were often adorned with rhinestones. 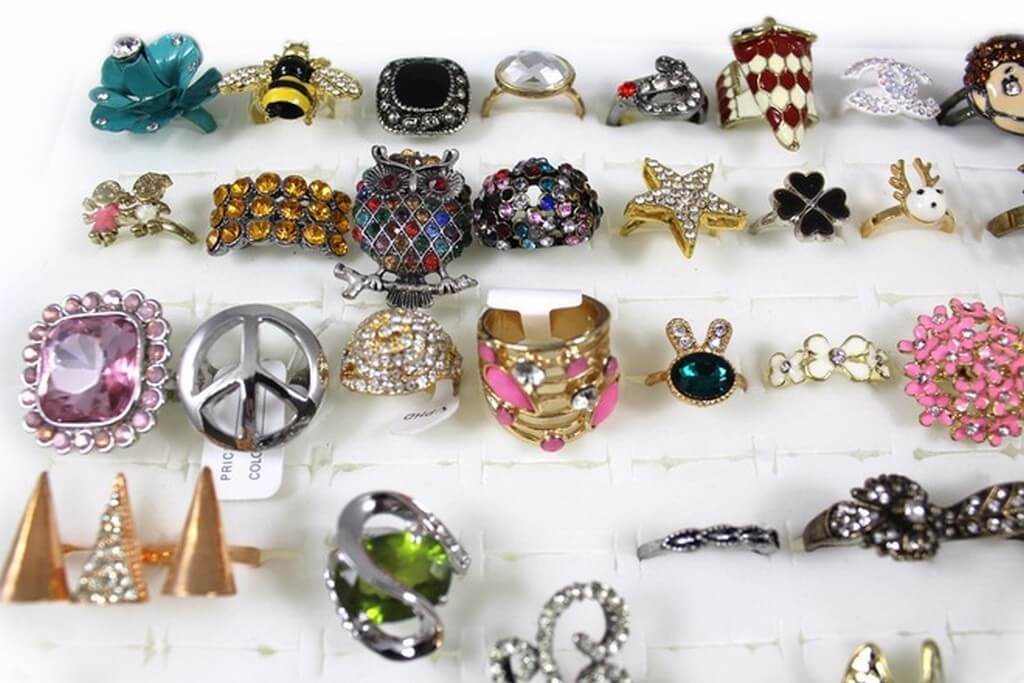 The 1890s were a time for extravagance which spilled down to jewellery as well. Over a course of time, maximalism paved the way for simpler designs that included figural shapes which were small and elegant with small rhinestone accents.

During the 1920s fashion was changed rapidly. Dresses had gone from fitted to a looser comfortable style. There were two distinct styles that occurred during this era – the feminine style and the androgynous style. Jewellery from the 1920s drew on the art deco period. The majority of rhinestone jewellery was made with clear rhinestones.

As the 1920s moved jewellery once transitioned to become bolder. Dramatic colour was in style. During the depression in 1930s, fashion was no longer feasible. Jewellery became an affordable comfort to many women.  Inexpensive costume jewellery could be used to revitalize an old outfit.  The industry began to produce bright coloured enamel pieces accented with rhinestones.

The jewellery during the 1940s once again became big and bold with rhinestones being produced in every imaginable colour, large stones set on large bold settings was the norm.

By the 1950s there were two very distinct looks – elegant and sophisticated for the more mature women, and casual and fun for the younger women.  The 1950s saw jewellery made completely from rhinestones.  For the younger woman there were flirty pieces, for the older women sophisticated elegance. Rhinestone sets became extremely popular.  In 1953 the aurora borealis rhinestone was introduced to the market with its fabulous array of colour.  It was an instant hit! 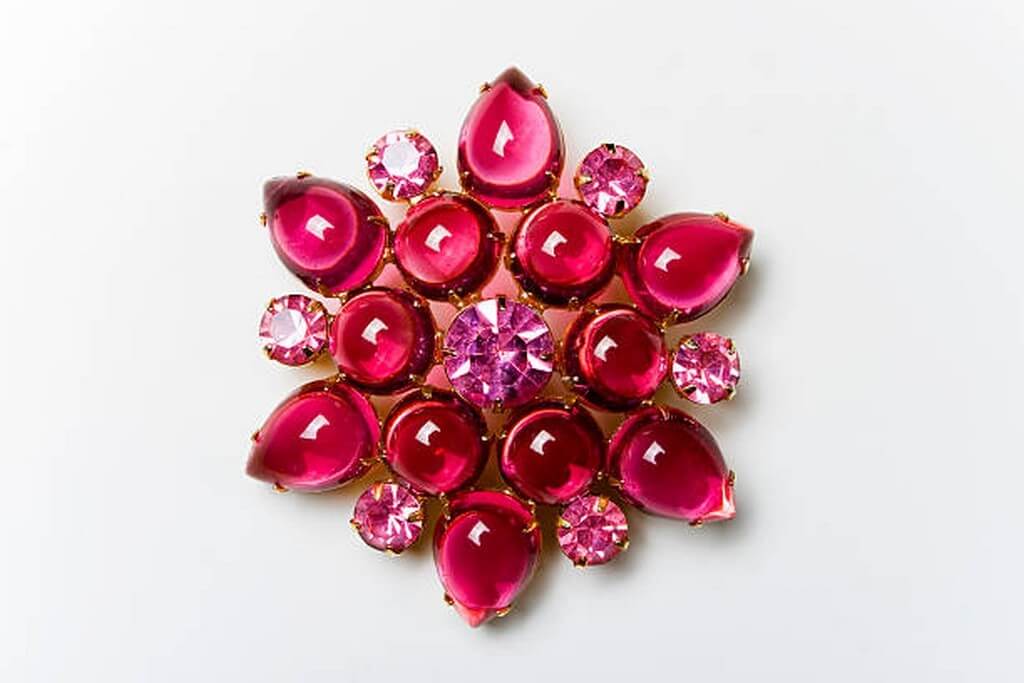 By the late 1960s the interest in rhinestone jewellery dwindled due to the take-over of the hippies who were more interested in dyed clothes with an emphasis on Mother Nature.

Rhinestones and their Shining History 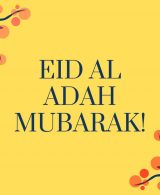 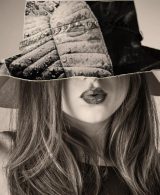