Oscar is around the corner and the red carpet is an integral part of the event. Its one of most respected awards and is attended by all celebrities, an event which has more than 30 million viewers. The red-carpet looks are something every Oscar attendee and audience look forward, to see what their favourite celebrities wearing. The preparation to look fabulous at the Oscar starts months in advance, from looking fit to have the best dress and accessories. The main reason for this is the judgement that the celebrities must go through, especially by the critic group called the Fashion Police. It’s the 90th Academy awards and we are listing the 21 best red carpet looks over the last 90 years. From Edith Head to Givenchy to Prada to Valentino to Elie Saab to Tom Ford lets see who all made the list. Here we go in descending order: 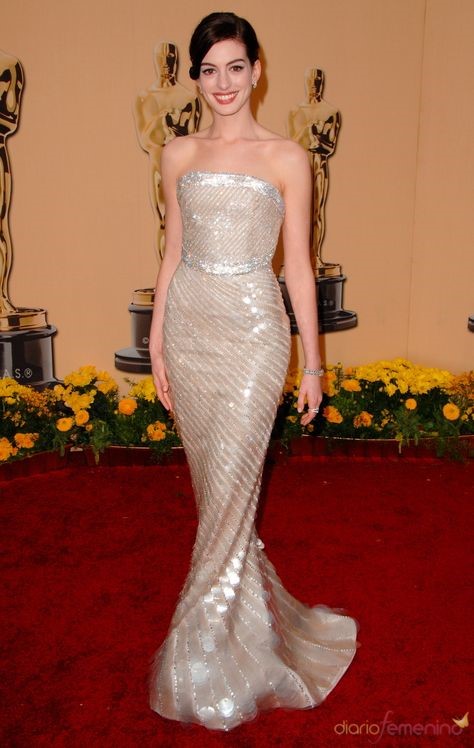 2009 saw Anne Hathway wearing a beautiful strapless Armani Prive Floor length cream gown, She stood out with this haute couture and is considered to be one of the best Armani dress Anne has worn. 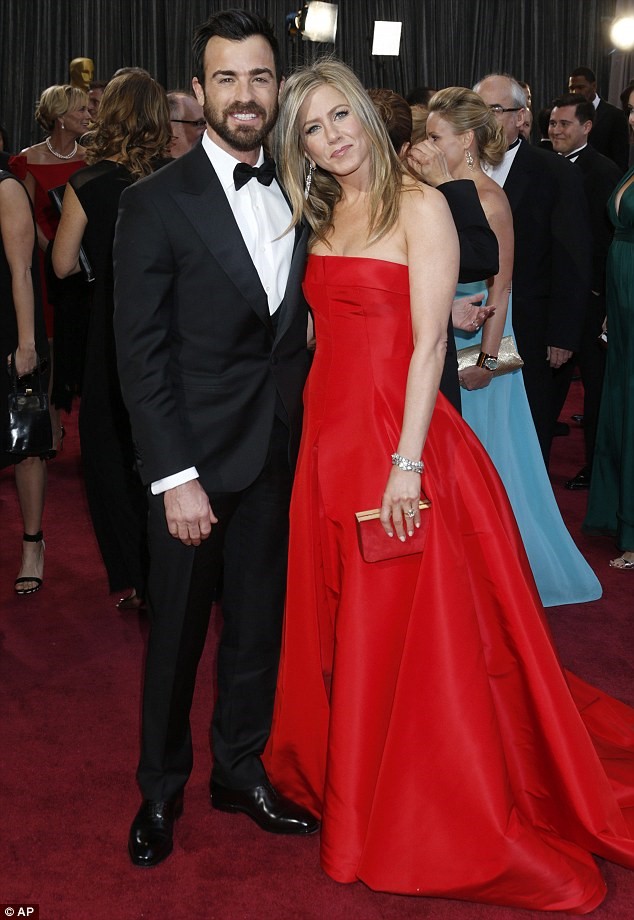 Red never goes wrong!!! Jennifer Anniston at 43 looked stunning in this Valentino Dress at the 2013 Oscars. She won a million hearts with this amazing gown looked enchanting. 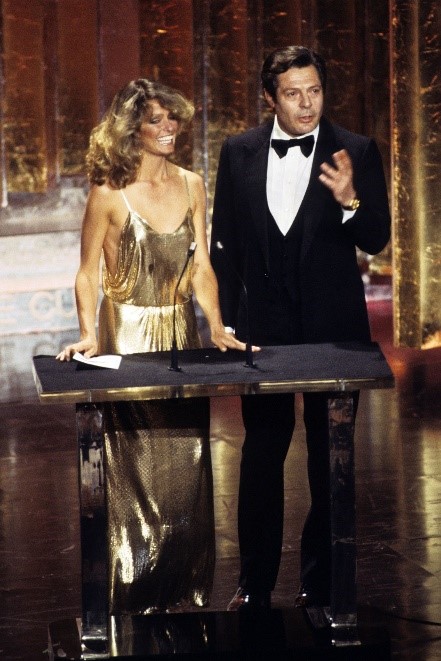 Farrah Fawcett was looking bright and stunning in this shimmering slinky gold gown by Stephan Burrows at the 1978 Oscars. It was one of the most memorable looks ever to rock the red carpet. The saying Old is Gold applies here. 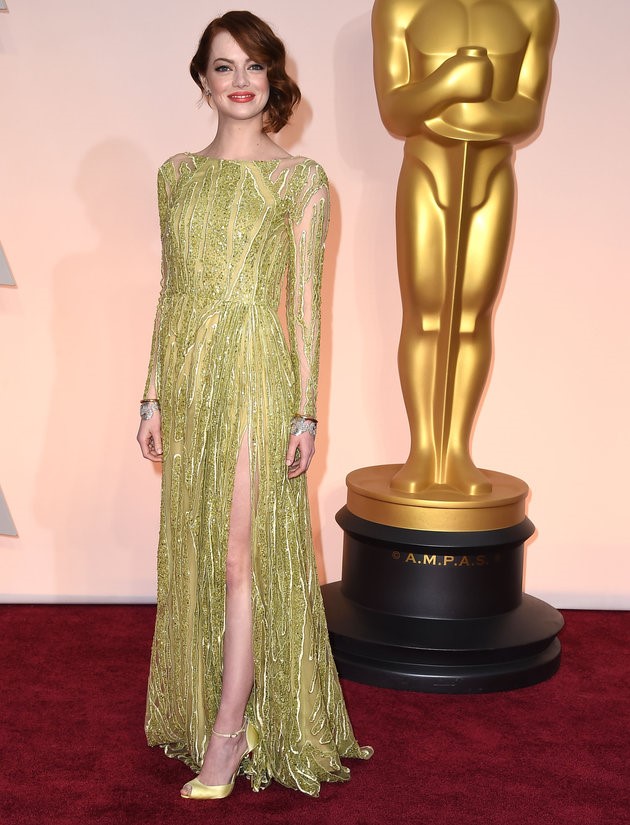 2015 Emma Stone amazed people with this beautiful Elie Saab pale green beaded gown. She won the Oscar that night and the red carpet. 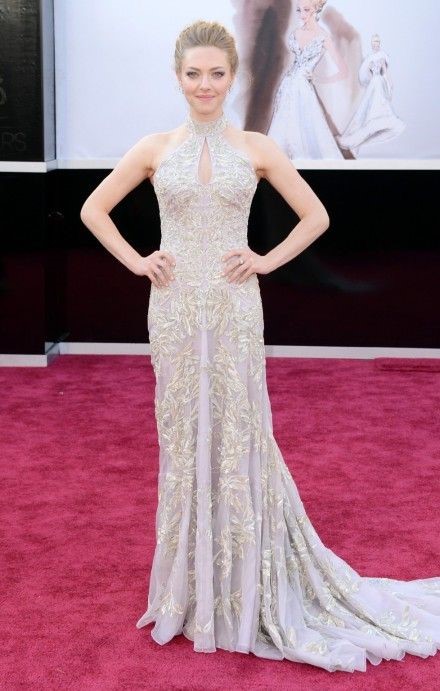 2013 saw Amanda Seyfried looking mesmerizing in this pale lilac and grey Alexander McQueen gown. She looked ravishing, not just the dress looked stunning, it was famous for the confusion created, as Anne Hathway was about to wear a Valentino Dress similar to this and avoided at the last moment to avoid the clash. 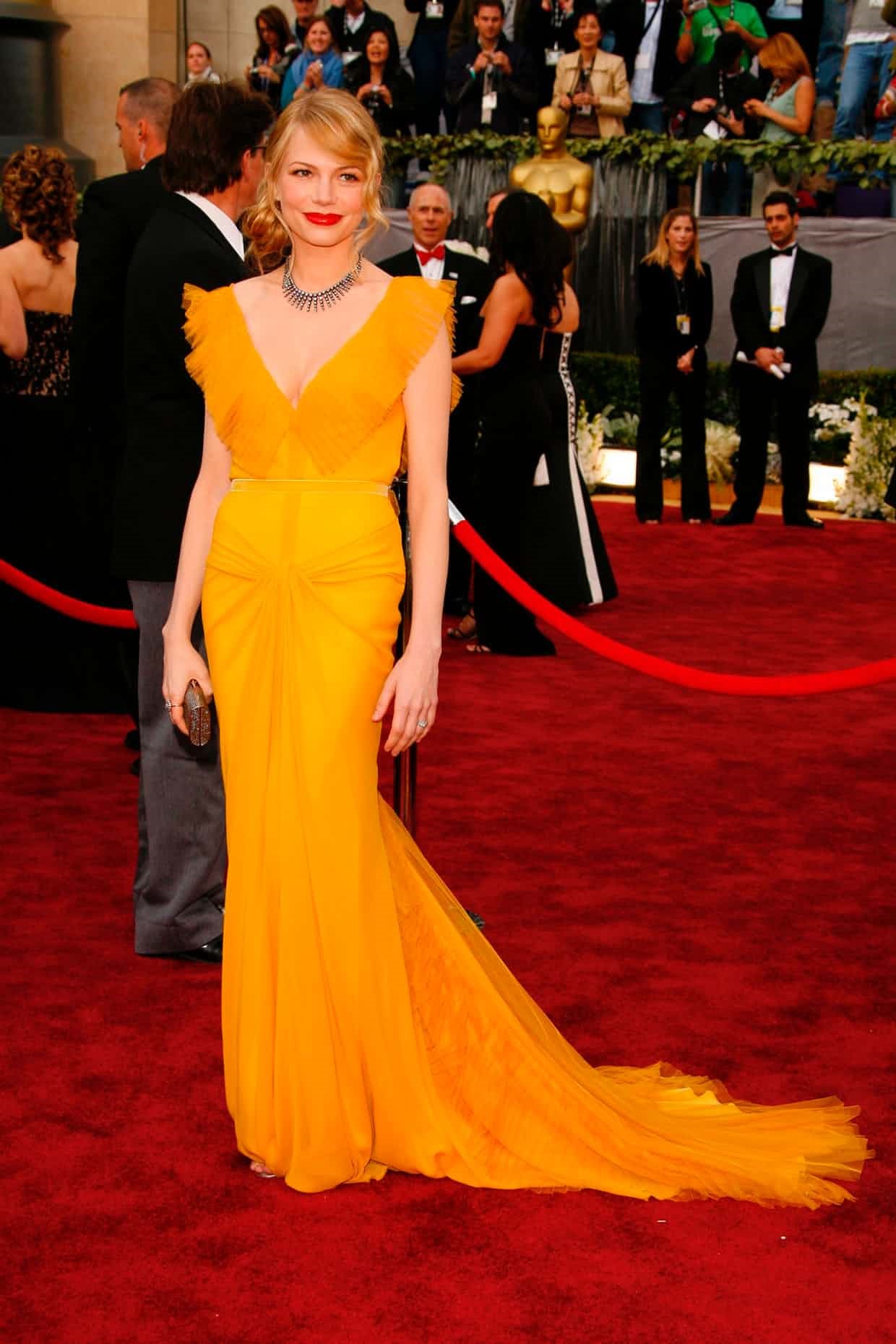 The ever-stunning Michelle Williams rocked the red carpet of 2006 in a brilliant yellow Vera Wang gown. She looked radiant and frills added the charm to the gown. 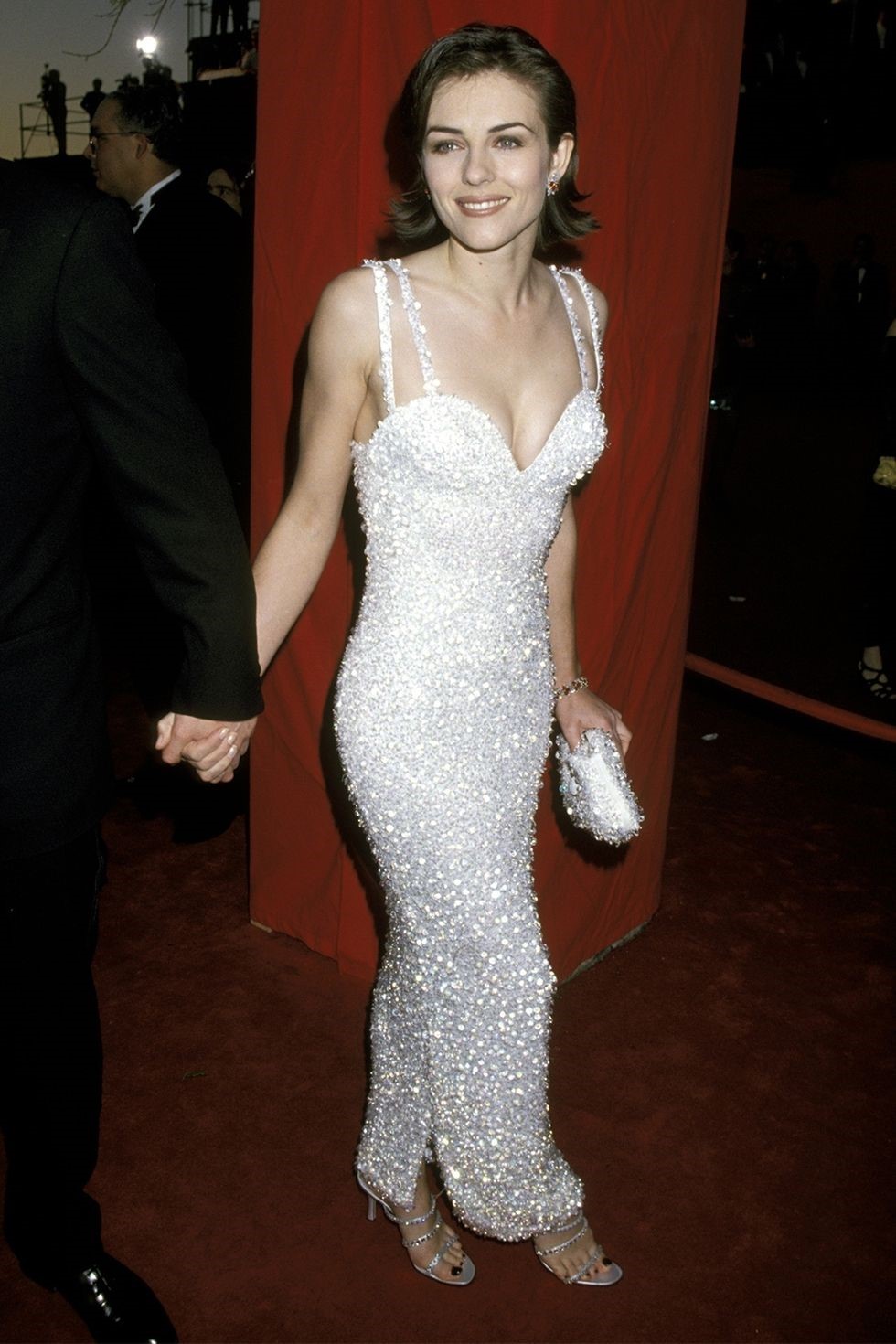 Elizabeth Hurley wore this Versace Gown at the 1995 Oscars and dazzled the red carpet. The gown charmed people’s heart and was a winner forever. 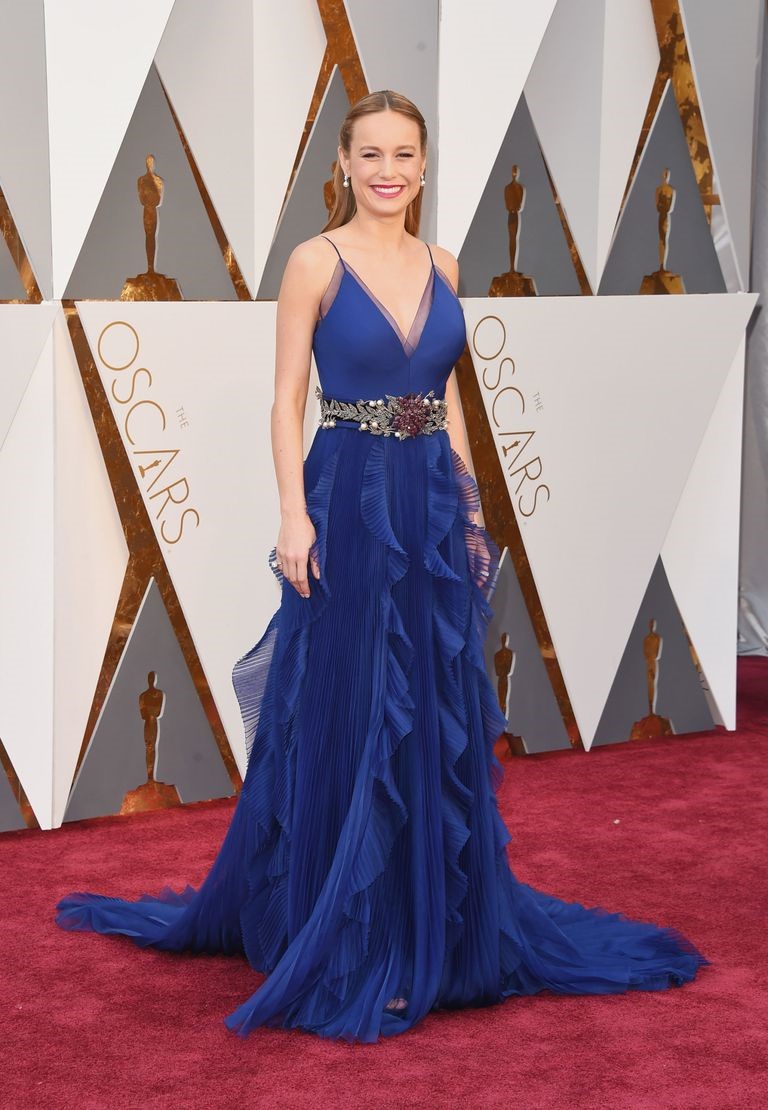 Brie Larson Gucci dress designed by Alessandro Michele ruled the red carpet in 2015, still, people talk about it. The custom-made dress won a million hearts and got into the best Oscar dresses over the years. 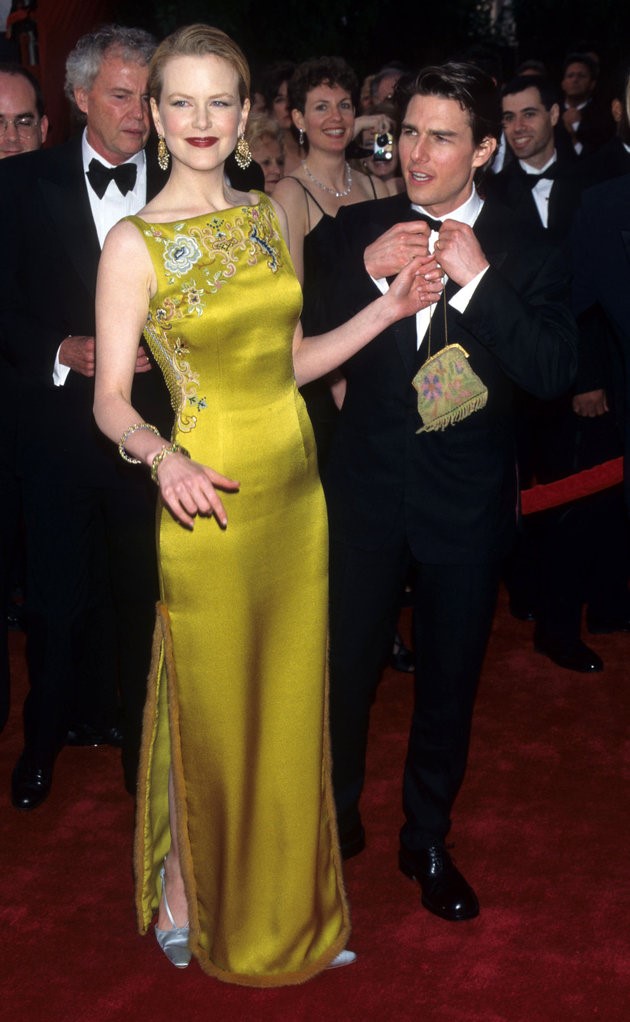 They say that the gown worn by Nicole Kidman at the Oscars, the year 1997 was the first official couture dress. The gown was designed by John Galliano, he just joined the House of Dior. The colour, the embroidery, the slits made the gown stunning, giving it a place in the history of best dresses at Oscar. 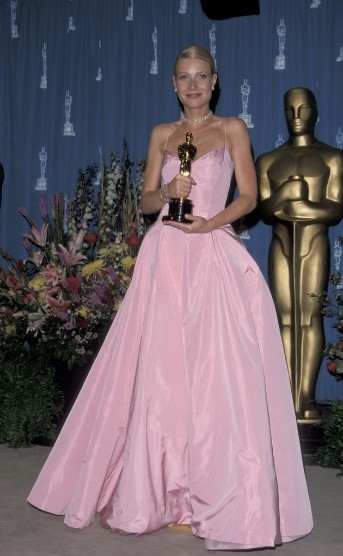 1999 was major for Gwyneth Paltrow, not just she won the Best actress for Shakespeare in Love, but she looked ravishing and won a billion hearts at the Red Carpet by wearing a baby Pink Satin Gown designed by Ralph Lauren. Its considered one of the best dresses ever to be adorned at the Oscars and the critics say that Gwyneth brought the Pink back in Fashion 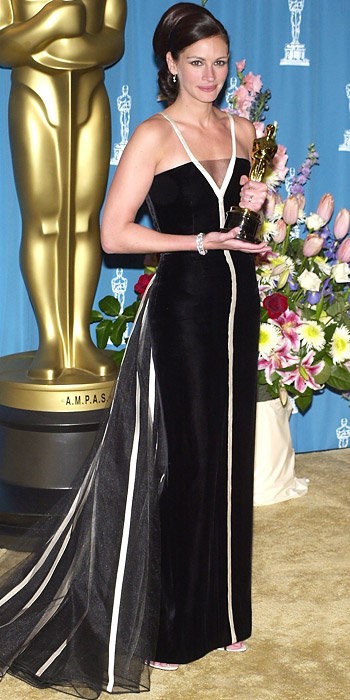 The Black and White Valentino Gown was worn by Julia Roberts made heads turn at the 2001 Oscar red carpet. The vintage velvet and Satin was one of its kind, will be remembered for years to come. 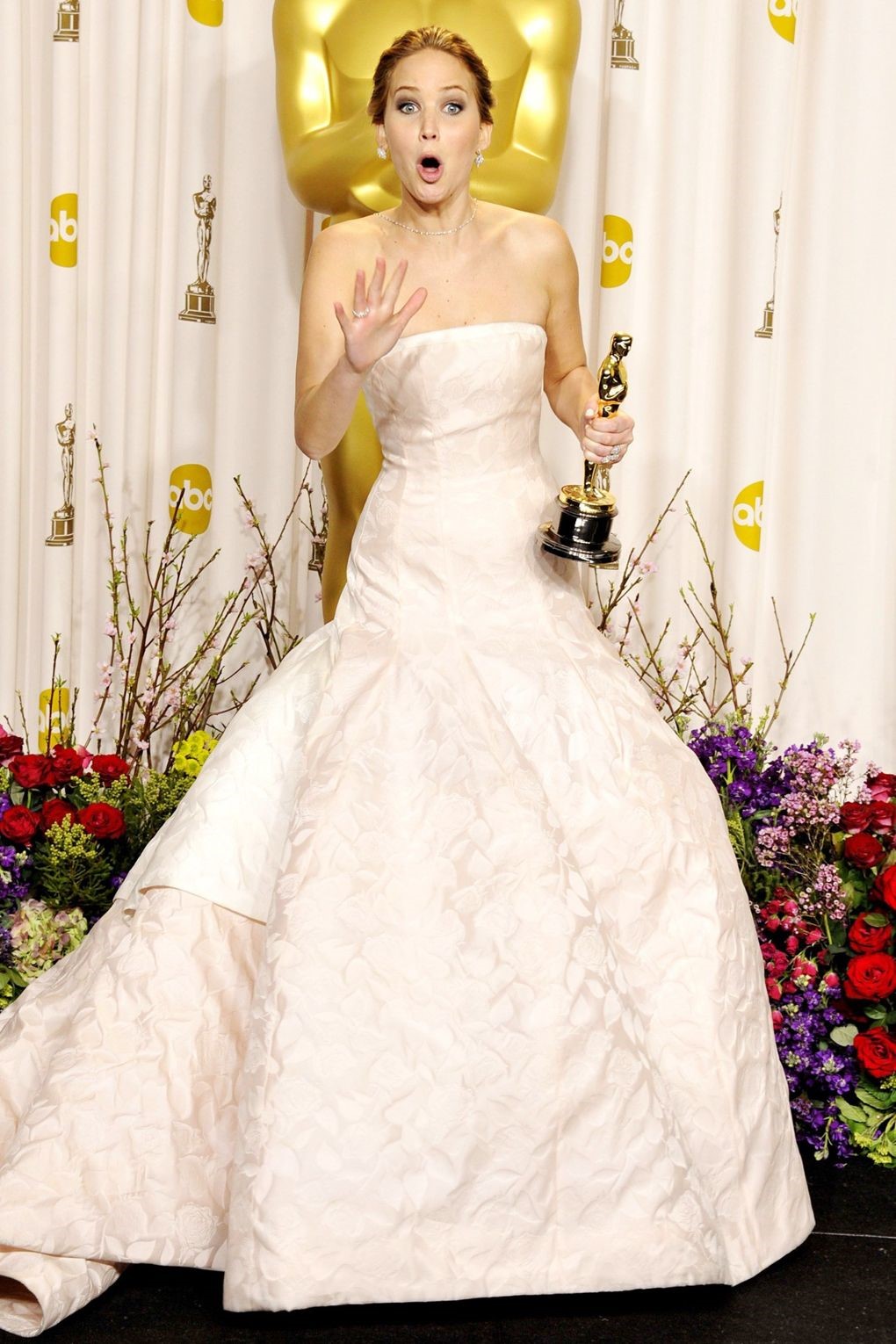 This Haute Couture dress became famous for the infamous trip Jennifer Lawrence had when she went to collect her Best Actress Trophy. The elegant dress was a last-minute choice for Jennifer, and let’s say right choice. 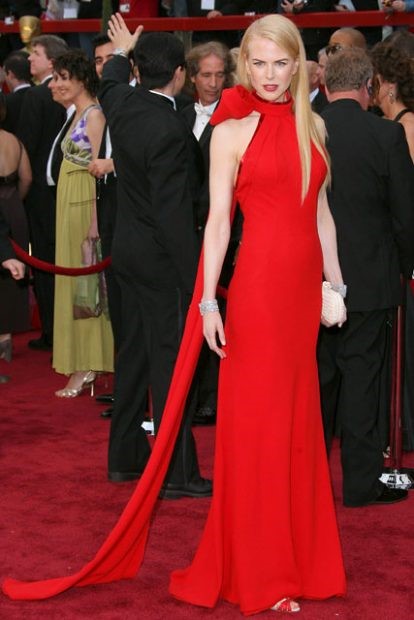 Red never gets wrong and never gets old, Nicole always gets her look right on the carpet. She again stunned the critics with this floor-length Balenciaga red gown.  It was magnificent all the way. 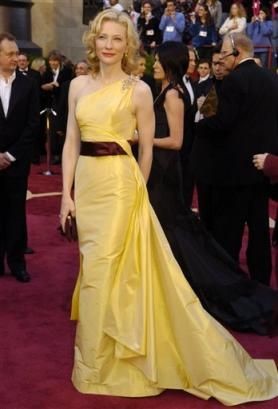 This one shoulder Yellow dress was custom made by Mr Valentino, she looked like a million Bucks at the red carpet in this yellow taffeta gown with a contrasting belt. The look was exquisite making her favourite among the Fashion critics. 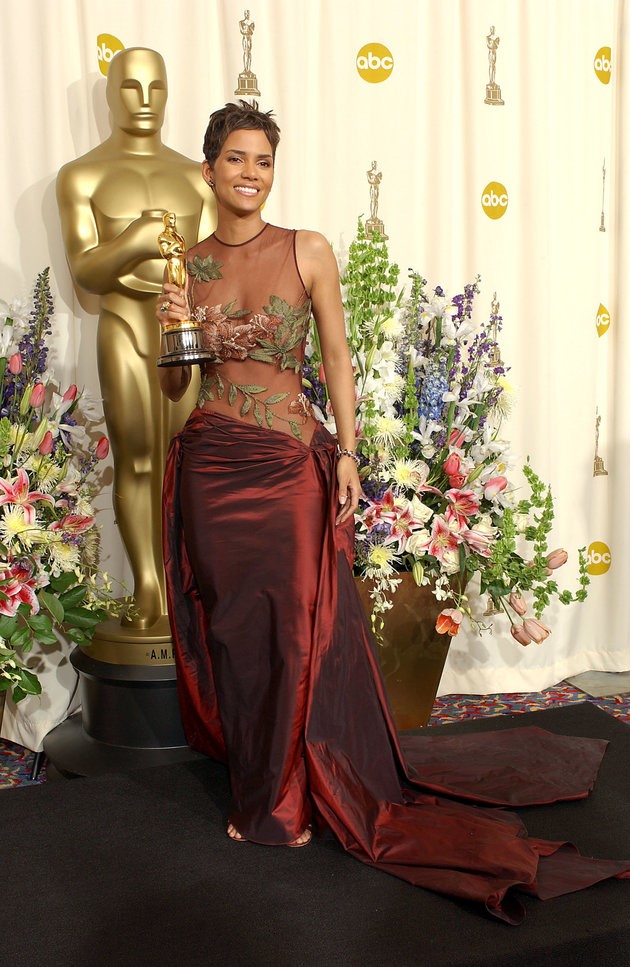 2002 saw Halle Beri taking home the best actress Oscar for The Monsters Ball but she rocked the red carpet in this Elie Saab net and embroidery top brown dress. This dress will be remembered and always makes a place for the best red carpet looks. 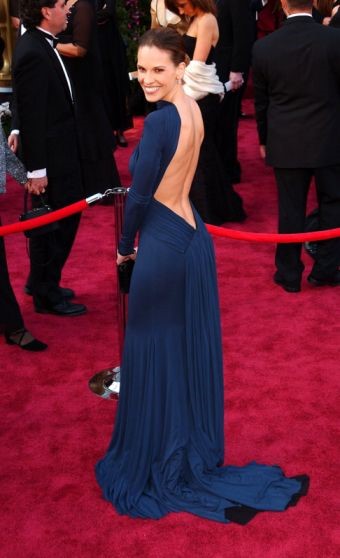 It was Hilary’s night when she won the Oscar for Million Dollar Baby and she looked fabulous in this midnight blue Guy Laroche gown which she brought from Paris. This gown is made with 27 yards of Silk Jersey, long sleeved and with a cut out back making Hilary rule the carpet. 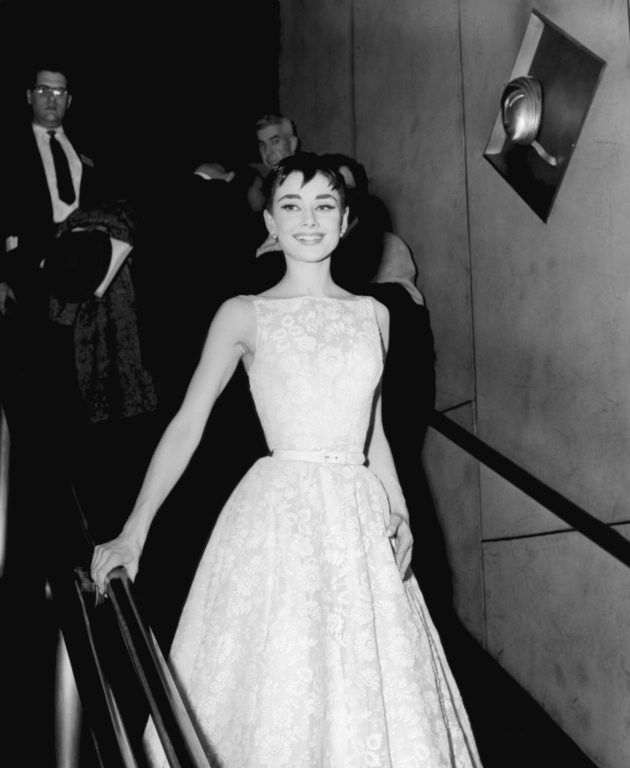 1954, when Audrey Hepburn wore the white floral dress designed by Hubert de Givenchy, she never knew it will be talked for years. Her dress is one of the classiest and elegant dress ever to walk a red carpet. Needless to stay she looked delightful in this dress. 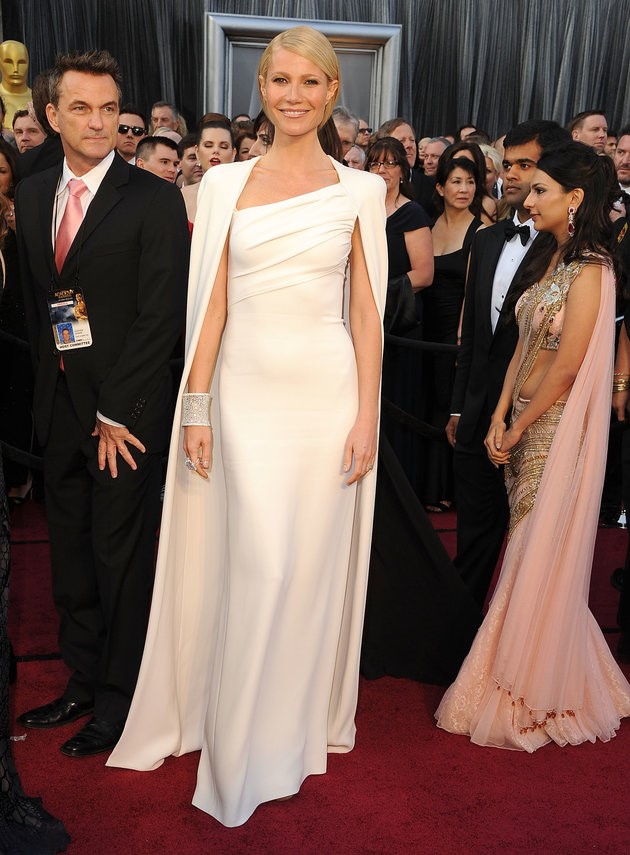 Gwyneth Paltrow never gets it wrong, She ruled the 84th Oscar red carpet donning a one-shoulder white Tom Ford Column Dress with a matching cape. A difficult look to carry was easily done by Gwyneth with poise and elegance. 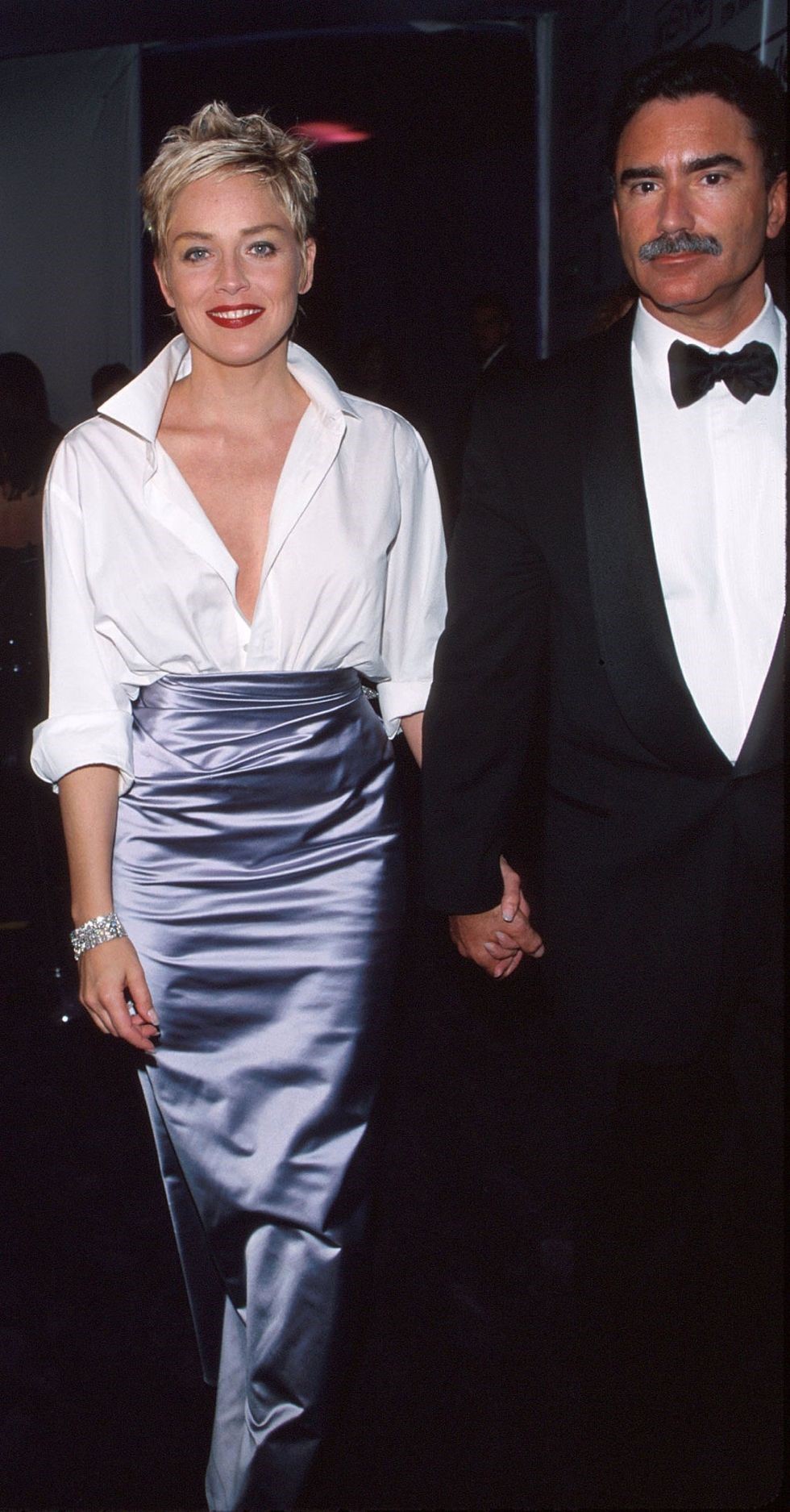 Sharon Stone wore this Gap shirt and Vera Wang skirt at the 1998 Oscars, a way to look stunning in her husband’s shirt and an evening skirt. Looking stunning at a minimalistic look, little did she know her mix up of clothes will be talked for years. 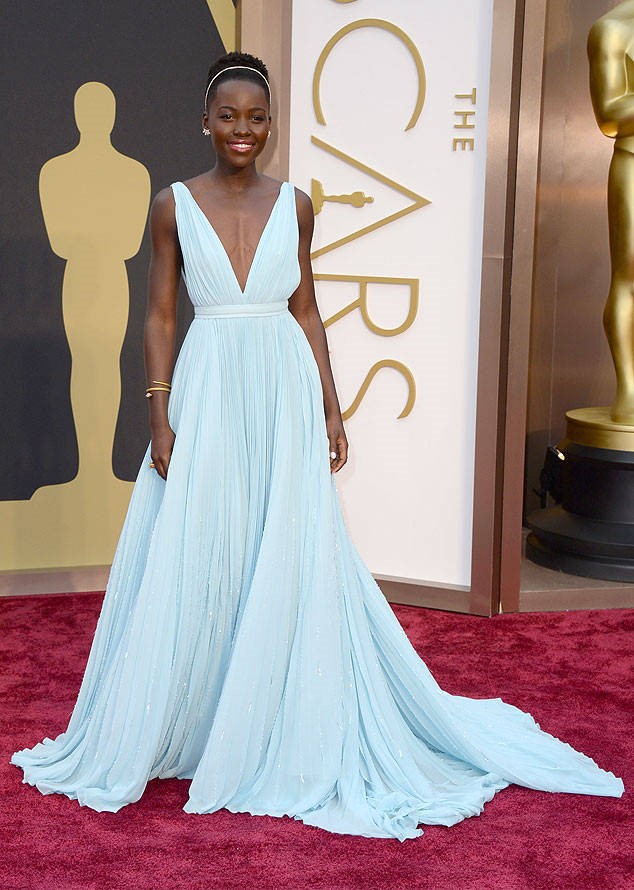 Lupita won a billion hearts through her performance in the movie 12 years a slave, and she made a striking appearance at the 2014 Oscar with her pale blue custom-made Prada Gown. She was mind blowing and look liked a princess. 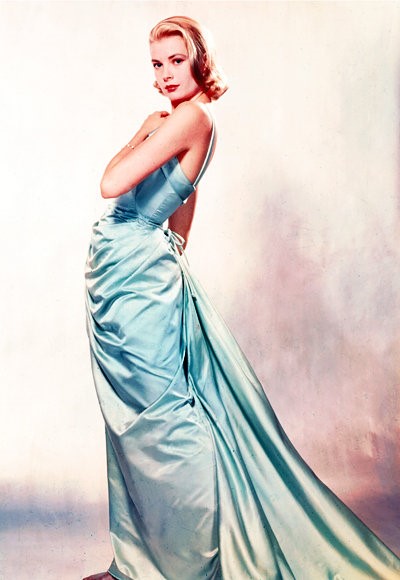 Grace looked captivating in this Ice Blue gown designed by Edith Head in 1955 when she won the best actress award for “The Country Girl”. This dress was voted as one of the best dresses ever to grace the Oscar red carpet and yes, it’s our favourite too.

Even though there are many celebrities who were bonny and prepossessing at the red carpet, we have the above 21 who have made into our list, they were elegant, charming, classic and beautiful, but what made them stood apart is the change factor they brought in. They were appreciated for being gallant, to start something, to take a risk and motivate others.

JD Institute not just train the students in Fashion Design Course but also encourages them to bring in change, a way to start something and become a pioneer. 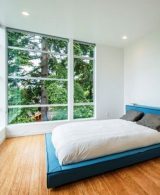 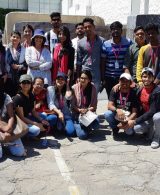