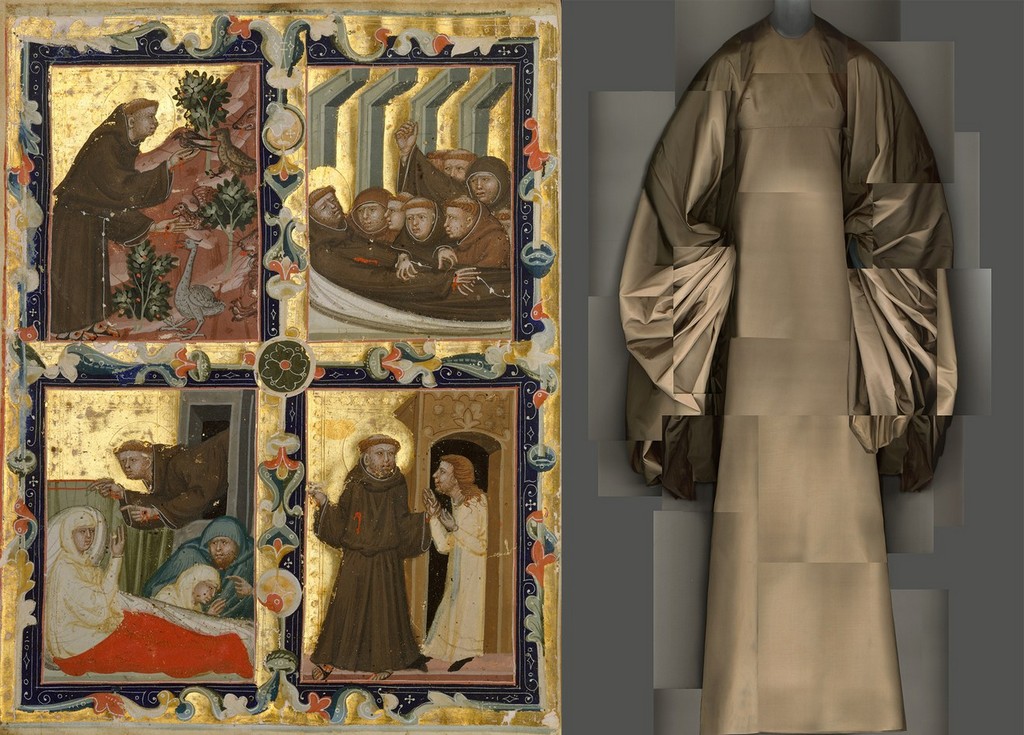 On May 7th, 2018 we saw one of the biggest Fashion Extravagant event, the met gala which happens on the 1st Monday of May. Every year worlds top celebrities grace the red carpet from Rihanna to Katy Perry to Priyanka Chopra and many others. The Annual Met Gala is a fund-raising event for the benefit of Metropolitan Museum of Arts Costume Institute in New York City. The celebrities will be seen wearing costumes, haute couture, custom made based on the event theme.

Anna Wintour, Editor in chief, Vogue looks after the benefit committee and the guest list. This year the theme for Met Gala was Heavenly Bodies: Fashion and the Catholic Imagination, a conversation between Fashion and Catholic religion with a blend of Art. Even though this is a very a controversial topic, the theme was approved by the Vatican and even have lend 50 pieces which were displayed at the Met Gala. The allure event saw an array of celebrities in experimental, stunning and to the theme dresses. Let’s list down the top 10 dresses in no order who took the theme too seriously. 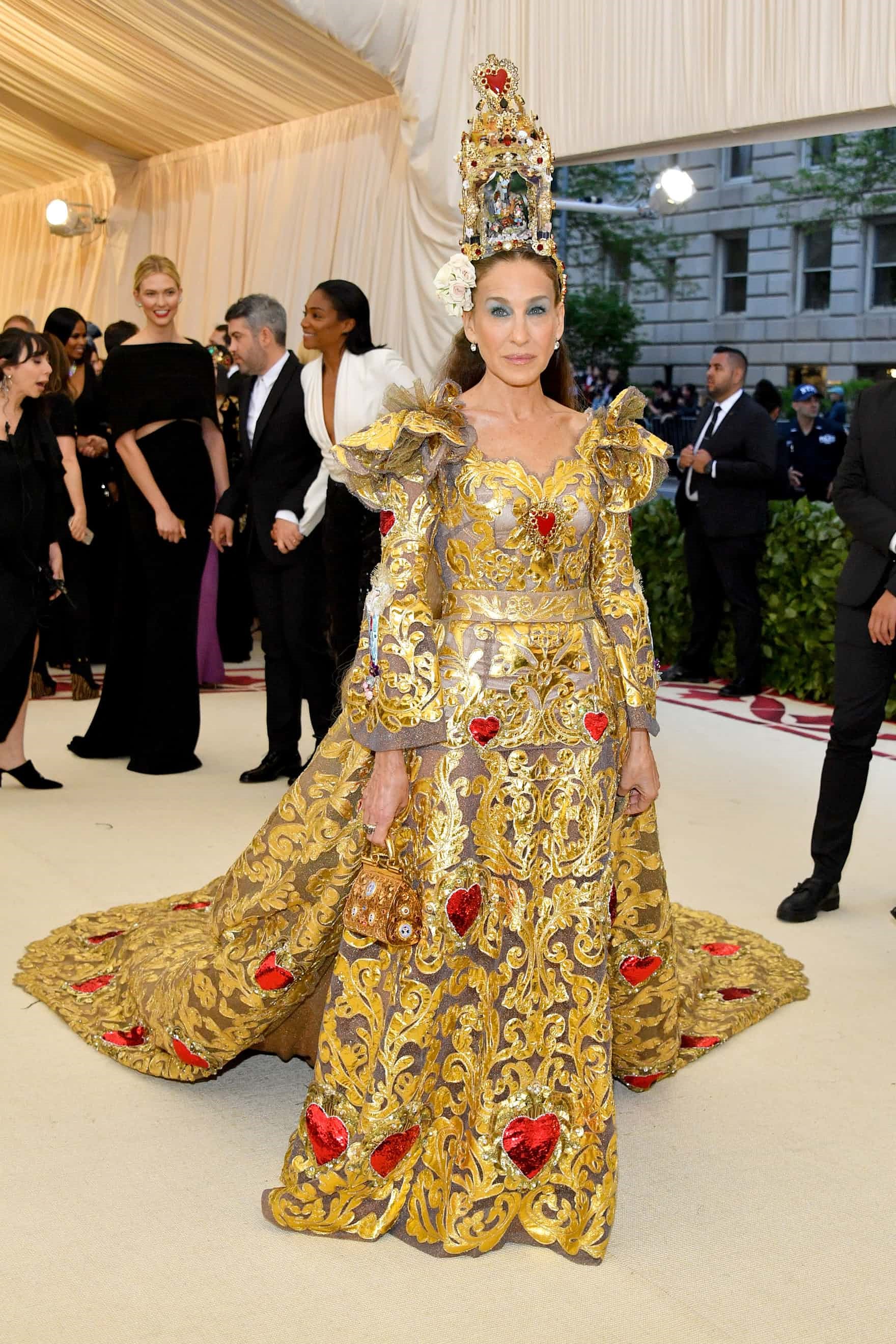 The sex and the city star looked stunning in this custom made Dolce and Gabbana, her headpieces looked like small chapel which completed her look. We say she really named the theme, but she could have done better.

2) Gigi Hadid in Custom Made Versace 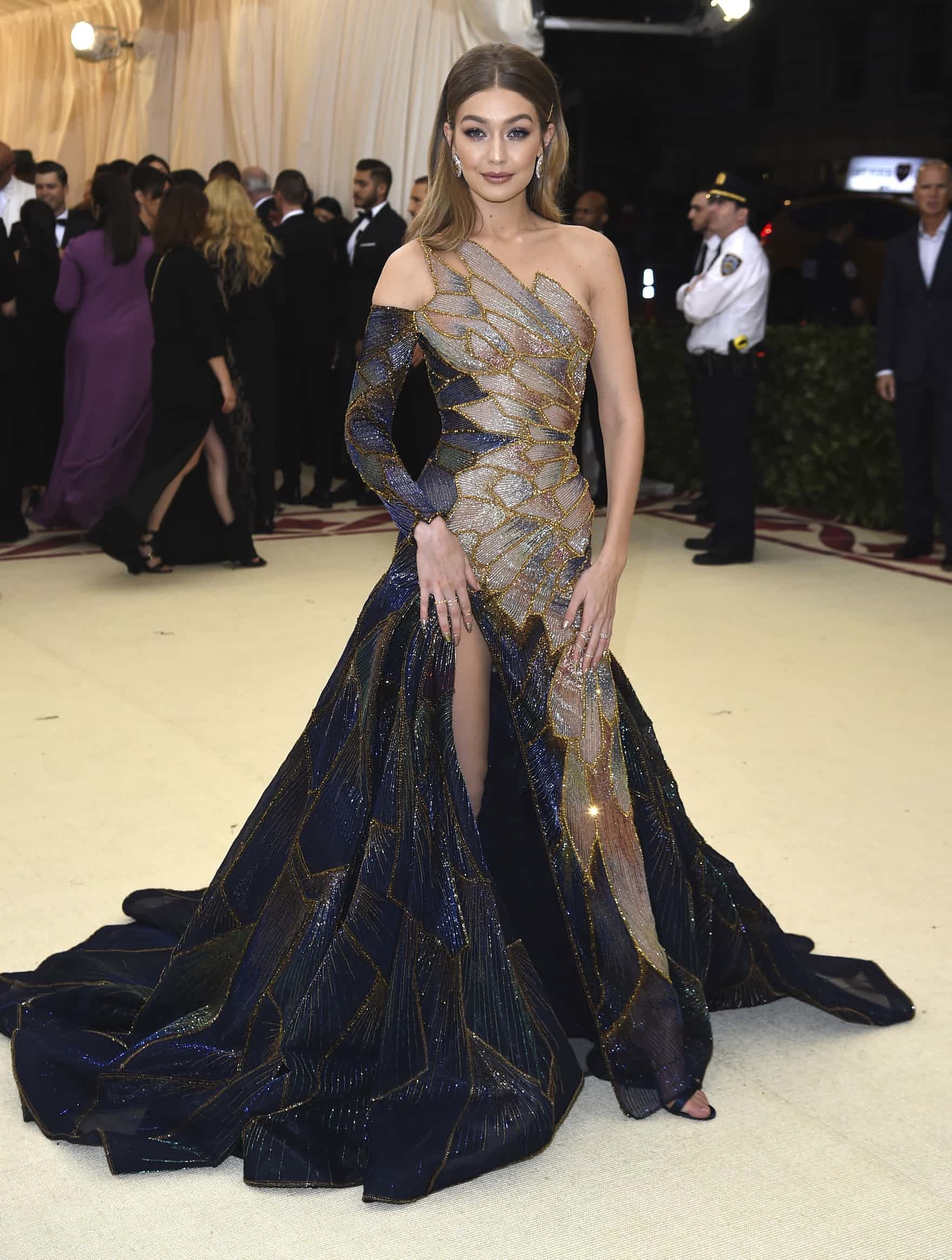 Gigi Hadid rocked the red carpet the look with this custom-made Versace which is kind of inspired by the Church window pane. She had her hair combed to give it a full look. 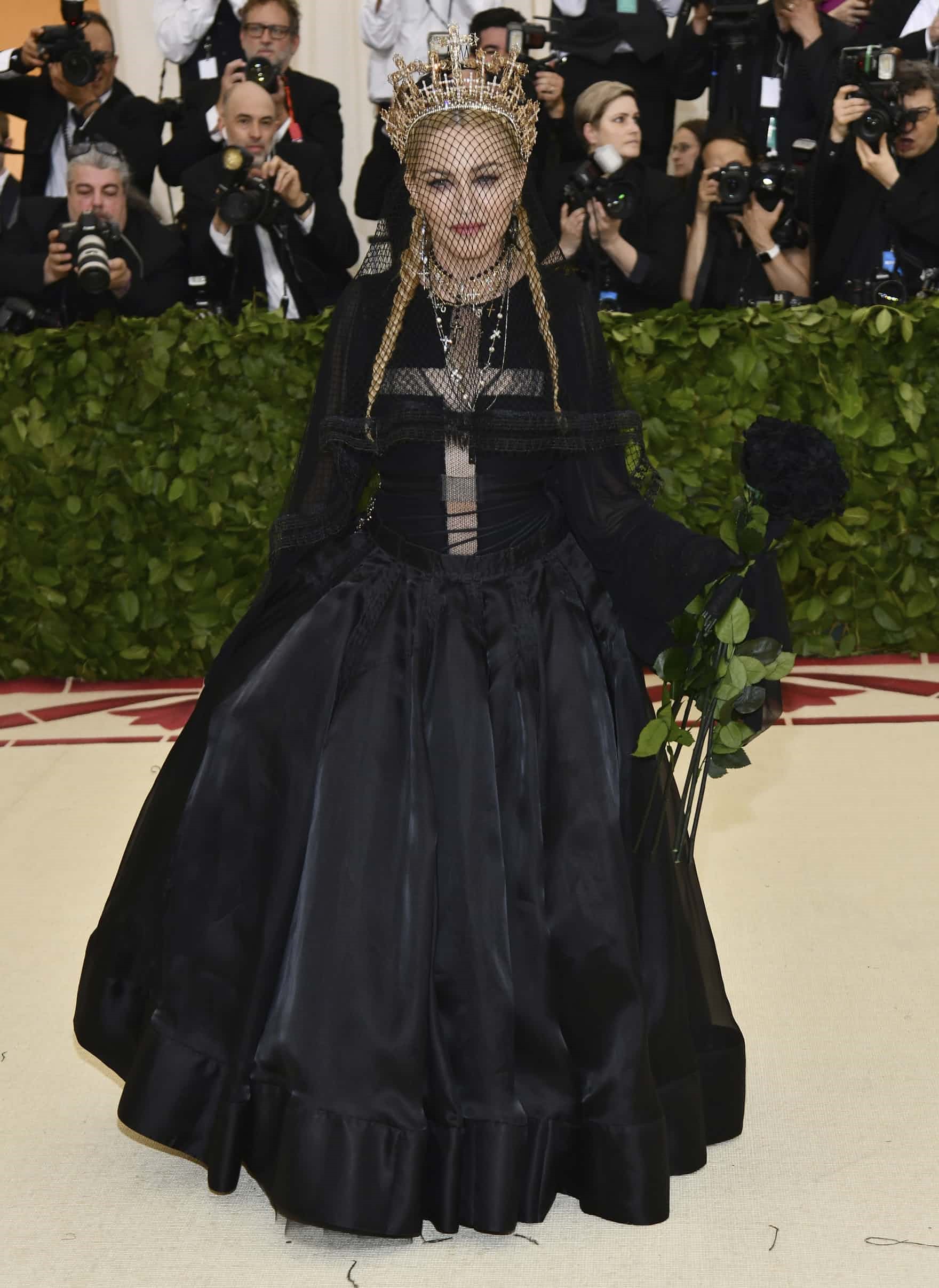 The queen of Pop looked like the definition of her famous song “Like a Prayer”. She chose to wear a Jean Paul Gaultier at the Red Carpet, she chose to carry few stalks of leaves giving us serious church goals. 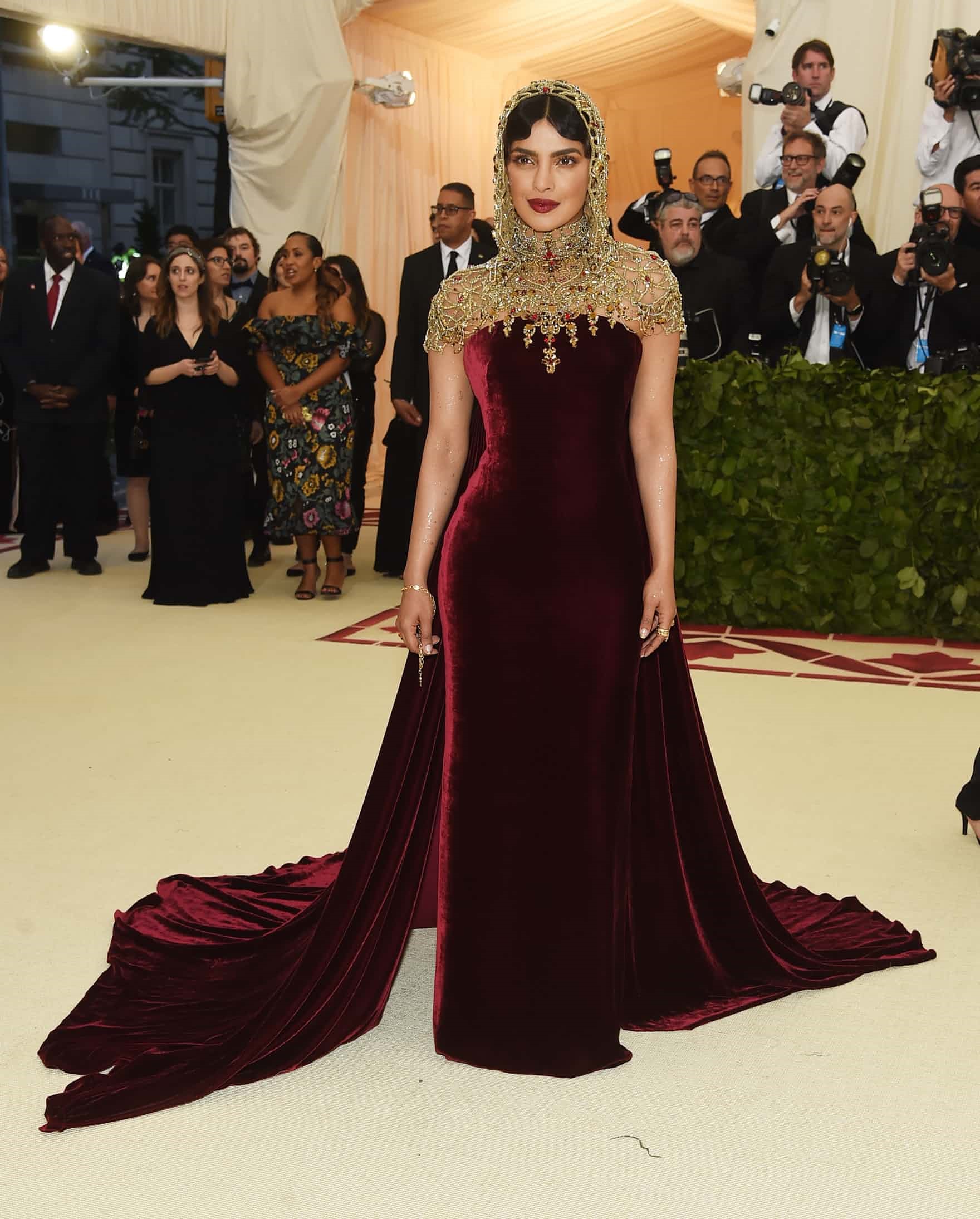 Priyanka Chopra looked like a Virgin Mary in Red in this custom-made Ralph Lauren, she completed her look with hoodie ornate piece which was made from red Swarovski stones. She is one artist who makes heads turn at the Gala event 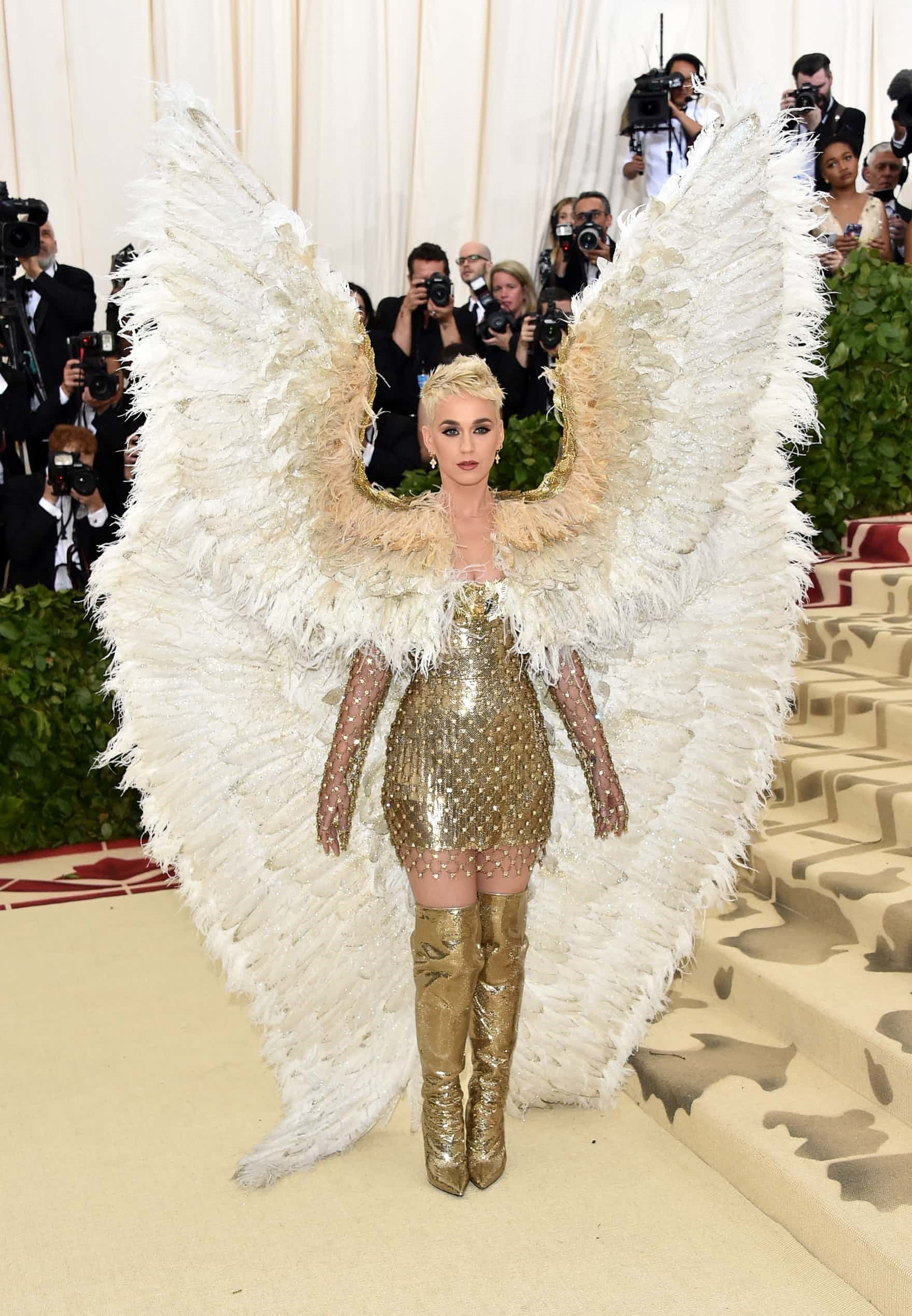 Katy Perry never shy away from being outlandish at the Red Carpet, her shimmering gold Versace dress with the mighty angel wings was such a treat for the eyes. It seemed like the heavens have open to sending the prettiest angel out. 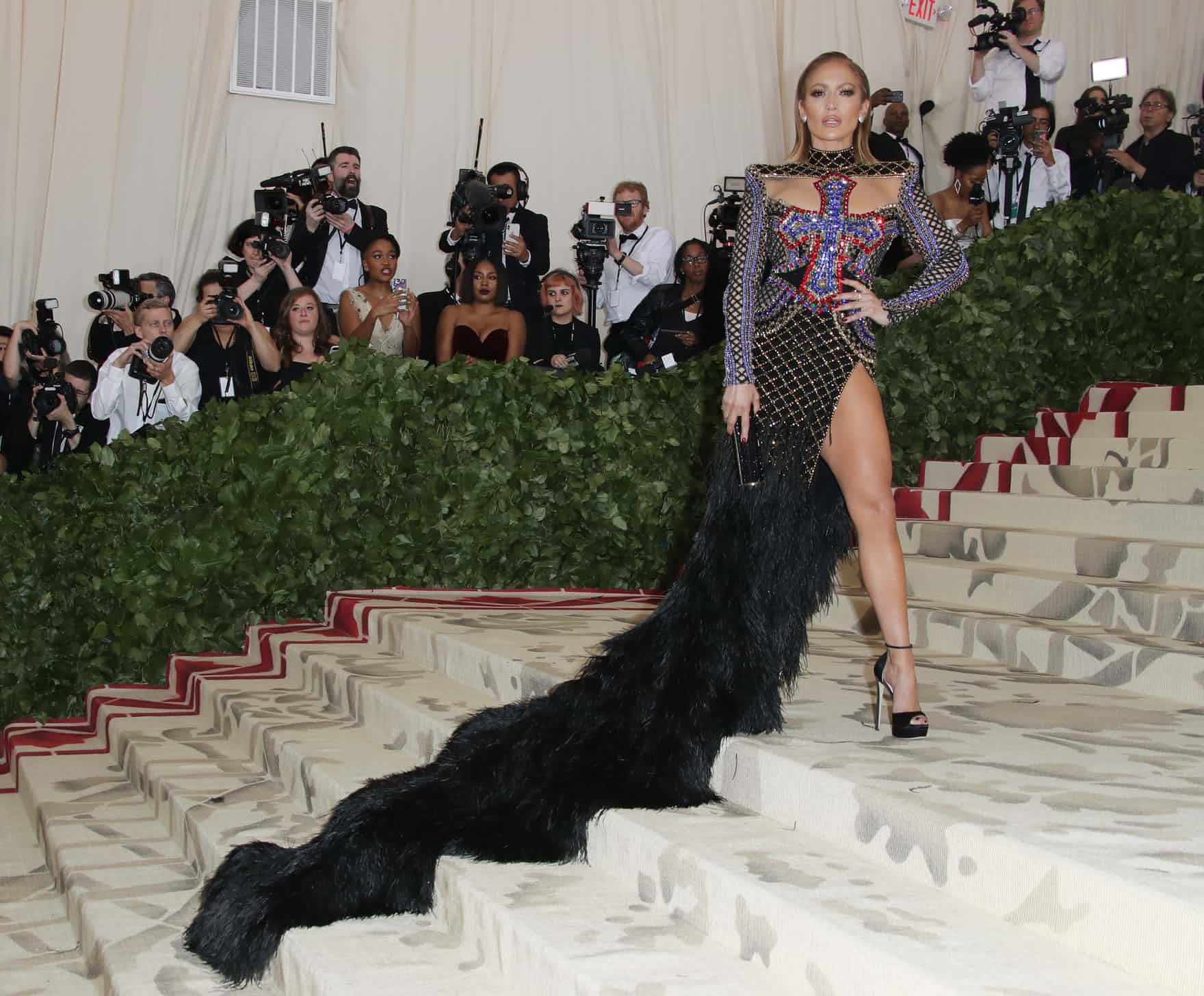 It’s her 10th Year at the Met Gala and she makes sure she gets the theme right and yes she did, the custom-made Balmain was perfect for the occasion. The cross kind we remind of the first Anna Wintour vogue issue. 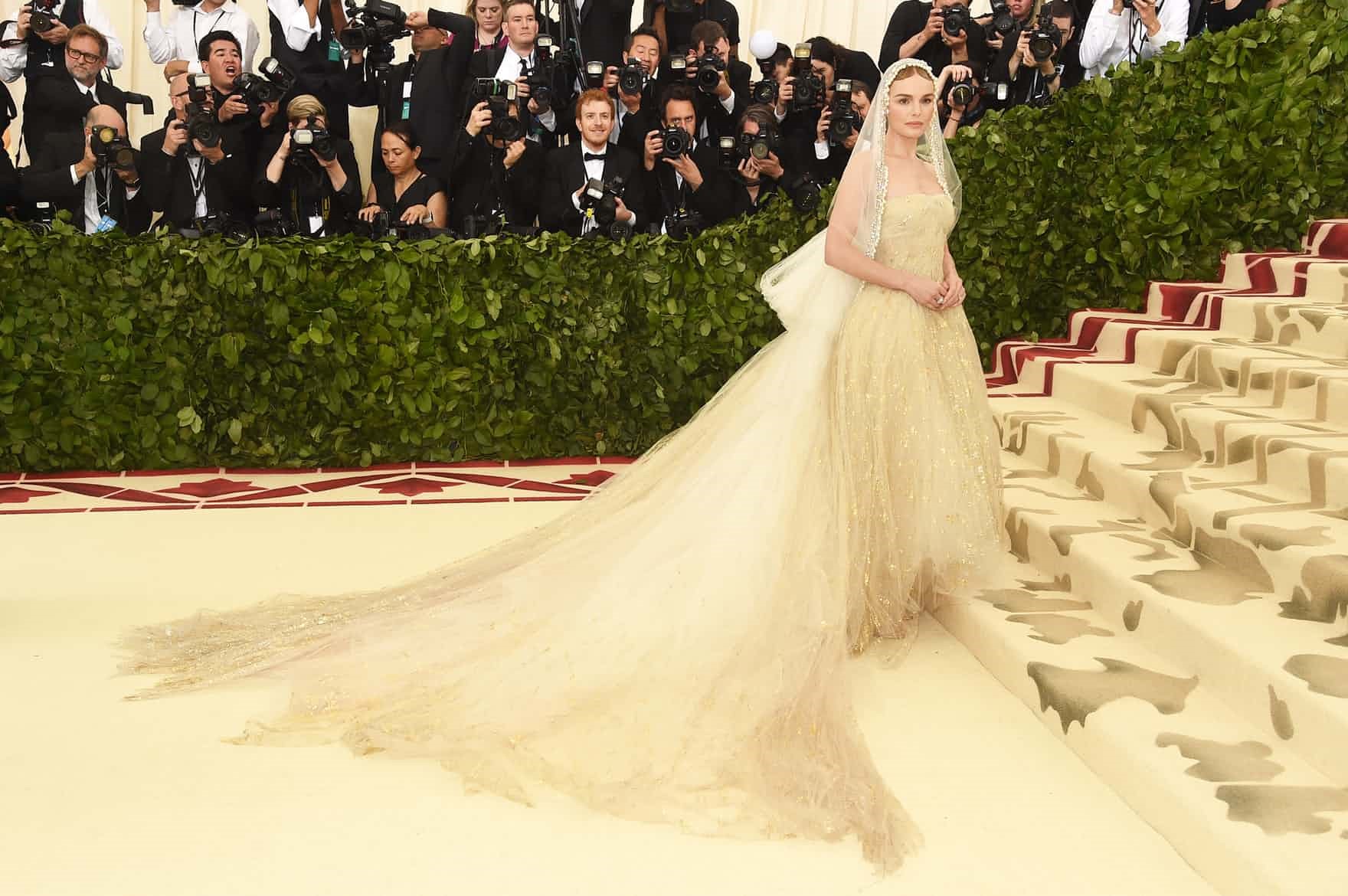 The Oscar de la Renta dress on Kate Bosworth gives us the serious virgin Mary vibes. She looked phenomenal in this beautiful off-white with a long train. 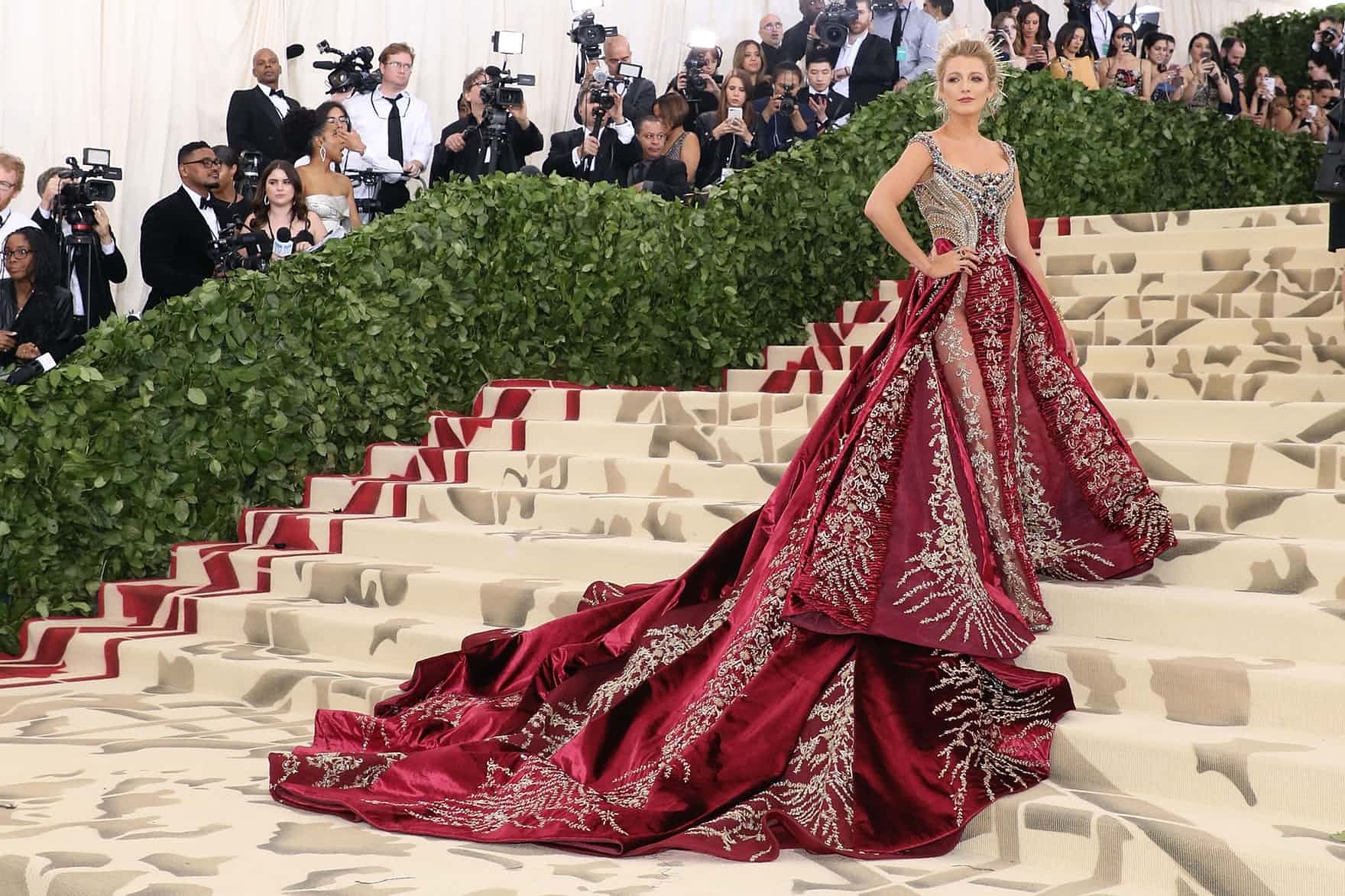 When it comes to red carpet, Versace rules the red carpet, most of the celebrities’ dazzle in Versace. Blake Lively looked gorgeous in this custom made Versace and she wore a headpiece to complete her look. 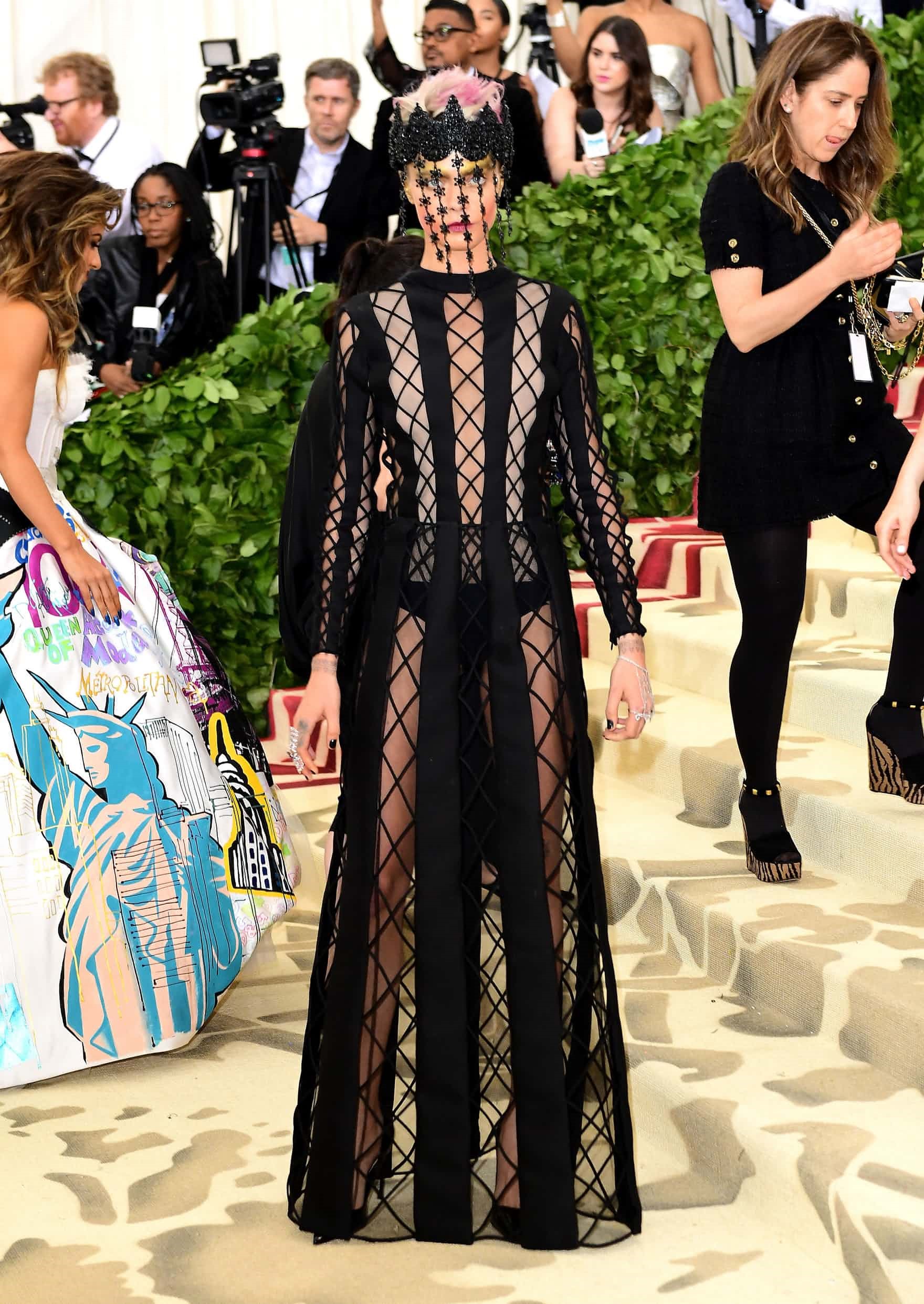 This dress kind of gives us the Madonna Vibe. Cara Delevingne gave us a divine look in this Dior Couture look. Her metal veil was the perfect accessory to complete this look. 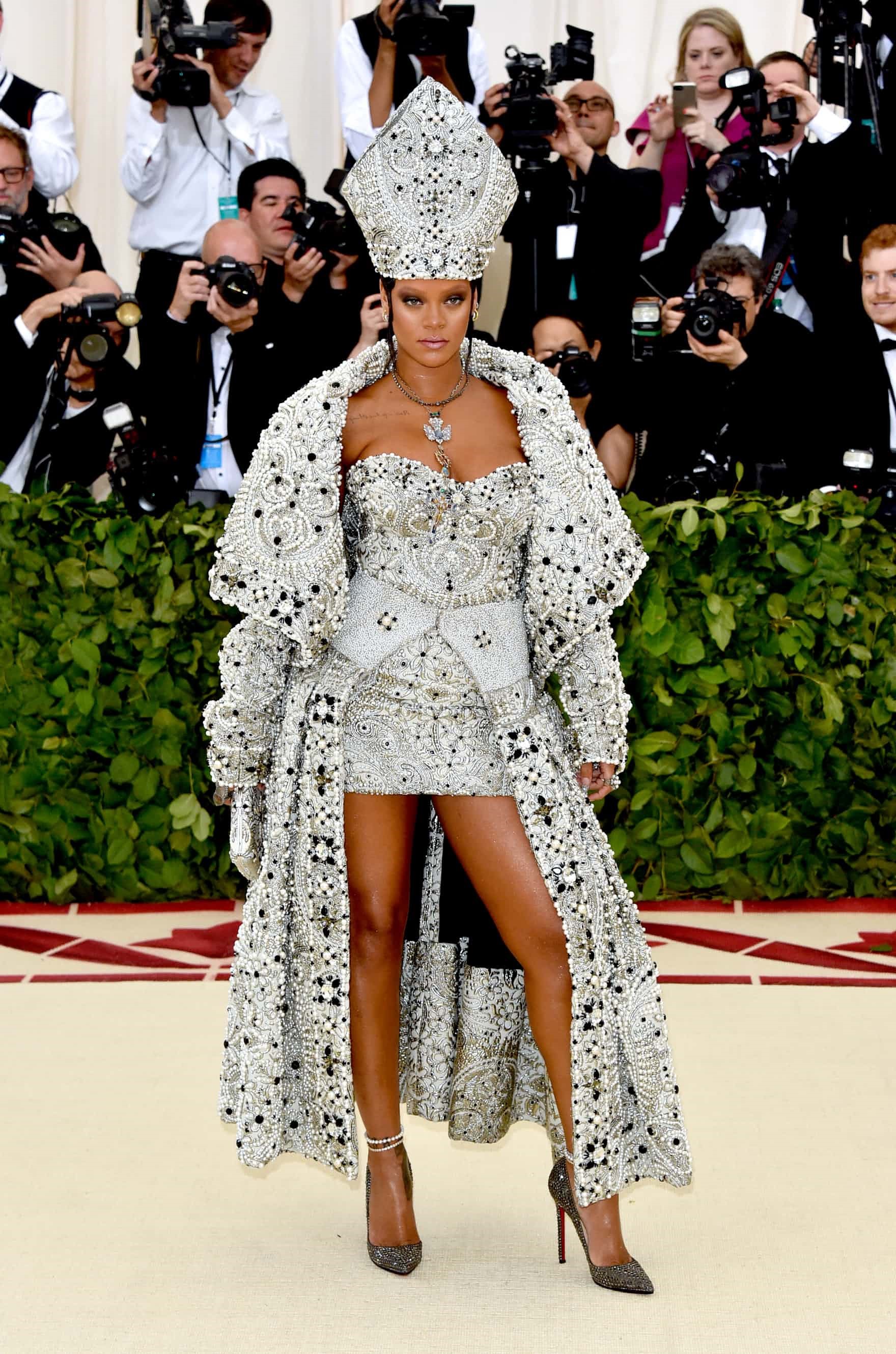 Now, this is what we call to talk the walk, Rihanna looked mind-blowing and to the theme in this papal inspired dress designed by John Galliano. She always stands out in the Met Gala in her experimental dresses and sure it catches everyone’s attention. 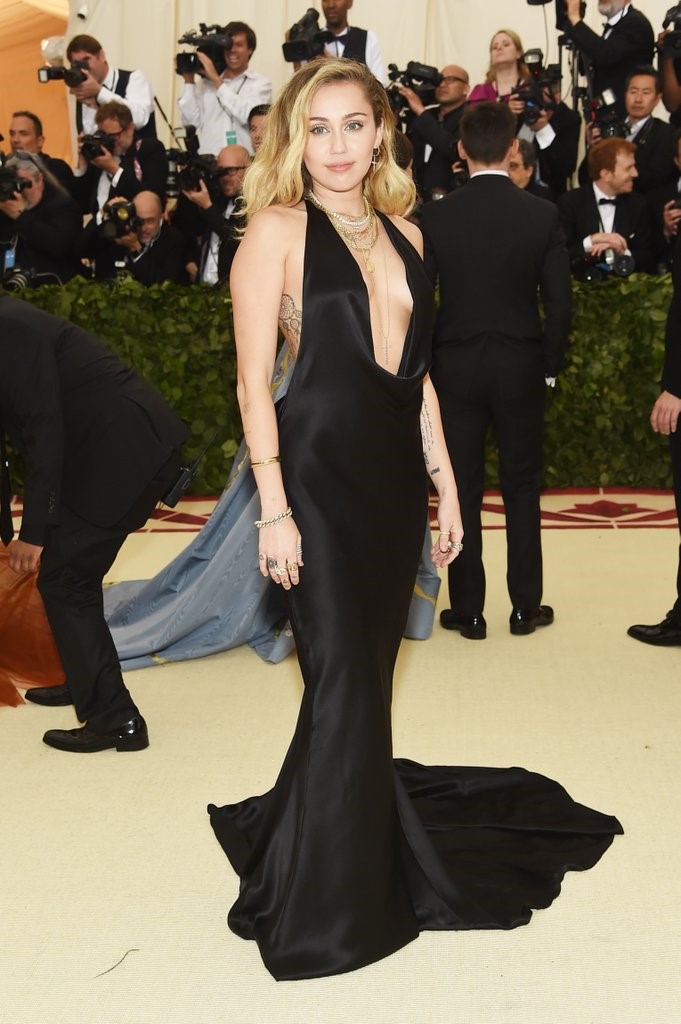 The opening of Met Gala with the theme gave us some serious vibes about religion. We love the theme and we would say Anna Wintour did it again. 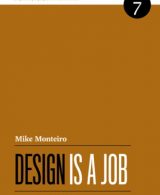 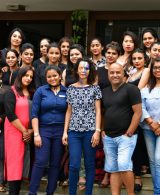