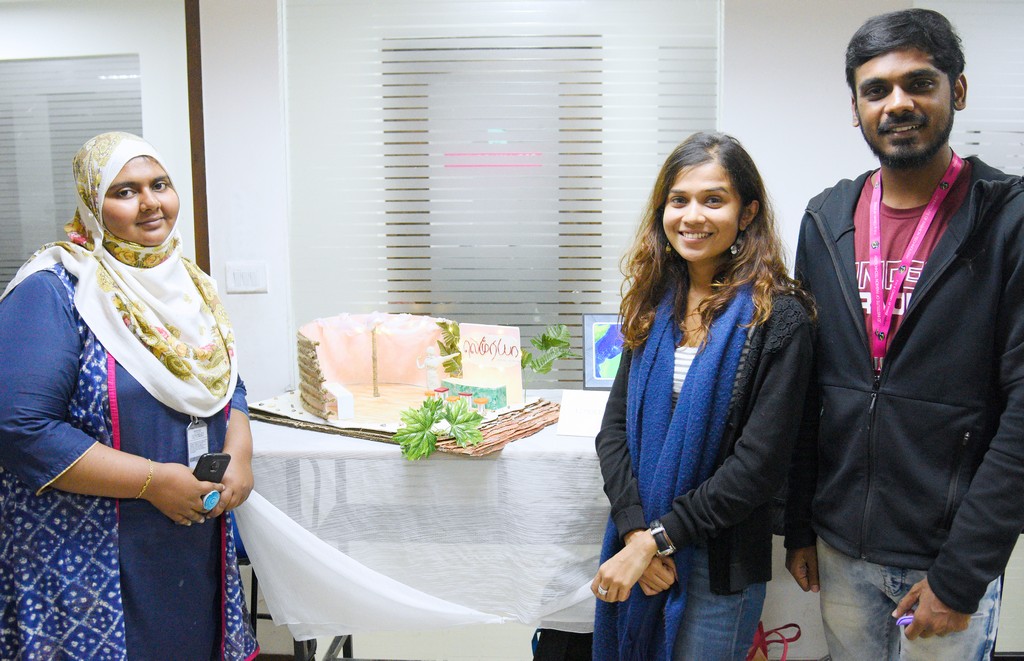 The students of Diploma in Interior Design June 2019 Batch of JD Institute of Fashion Technology, Bangalore presented a display on the Design Process module.

The students were instructed to create a miniature plan for their brand in a location of their choice. Based on the brief the students created a compelling interior design display keeping the aesthetics of the location in mind. The layout and design of a retail/commercial space for a brand is imperative as it tells the story of the brand thus providing an immersive experience for the customers who walk in. Apart from creating the space, they also had to keep in mind the essentials like the aesthetics, lighting, focal point and the elements of visual merchandising. 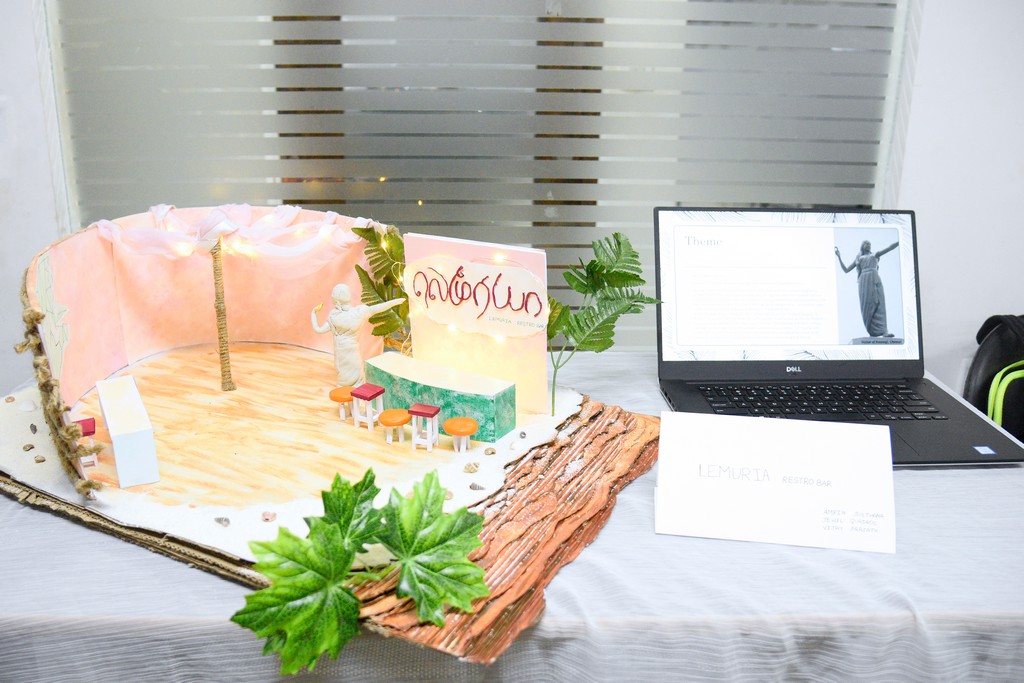 The spaces designed by students varied from resto bar, biking, eatery, sports and accessories store to a furnishing store.

The concept for Lemuria, a beach side resto bar was inspired by the hypothetical lost land equated to Kumari Kandam in Tamil mythology. Sri Lanka was chosen as the location of choice for the resto bar, due to its Tamil speaking population and their resonance with the concept of the lost land.  The sculpture of legendary Tamil woman Kannagi, who is worshipped and revered was placed strategically holding an anklet in her hand, to remind visitors of the moment where she broke it and cursed the King and city of Madurai for wrongfully putting her husband to death. The placement of sand, a log of wood and greenery were added to go with the theme of the space. Drapes were added to the design to create softness. The colour palette for the space was a mix of pastels and neutrals. Curved or circular lines provide relief, softness, and balance. They can give an elegant, human quality to interiors. 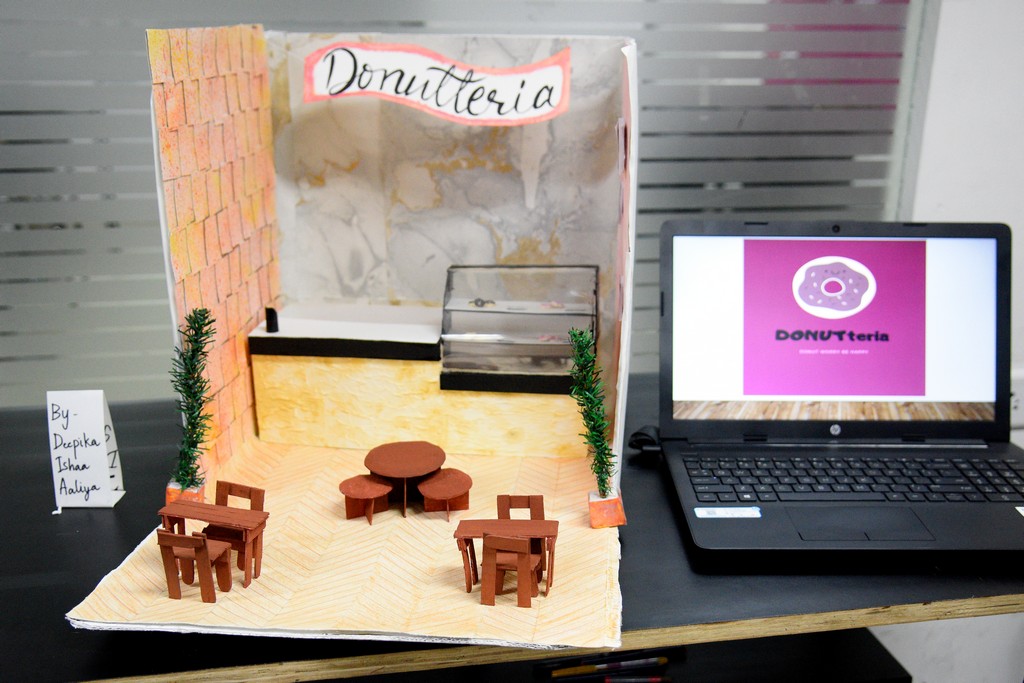 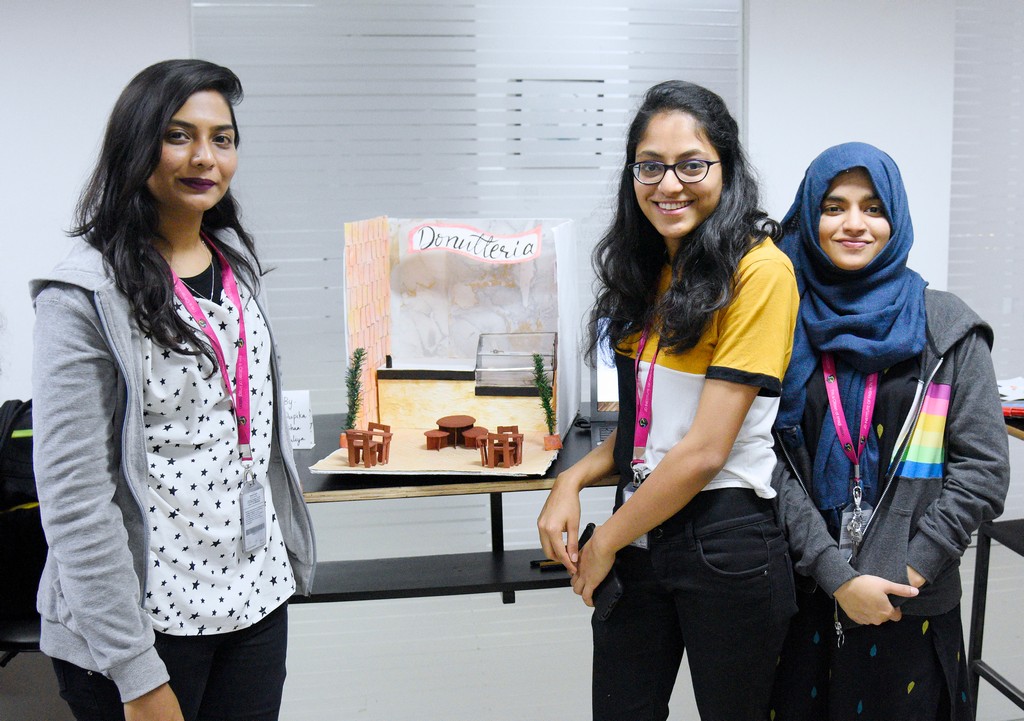 Donutteria was a donut store inspired by Dunkin Donuts envisioned to be located in Naples. The store was designed with a Contemporary theme using pastel colours. The décor incorporated tactile and visual texture with wooden flooring. Planters and furniture were placed to provide symmetrical balance. 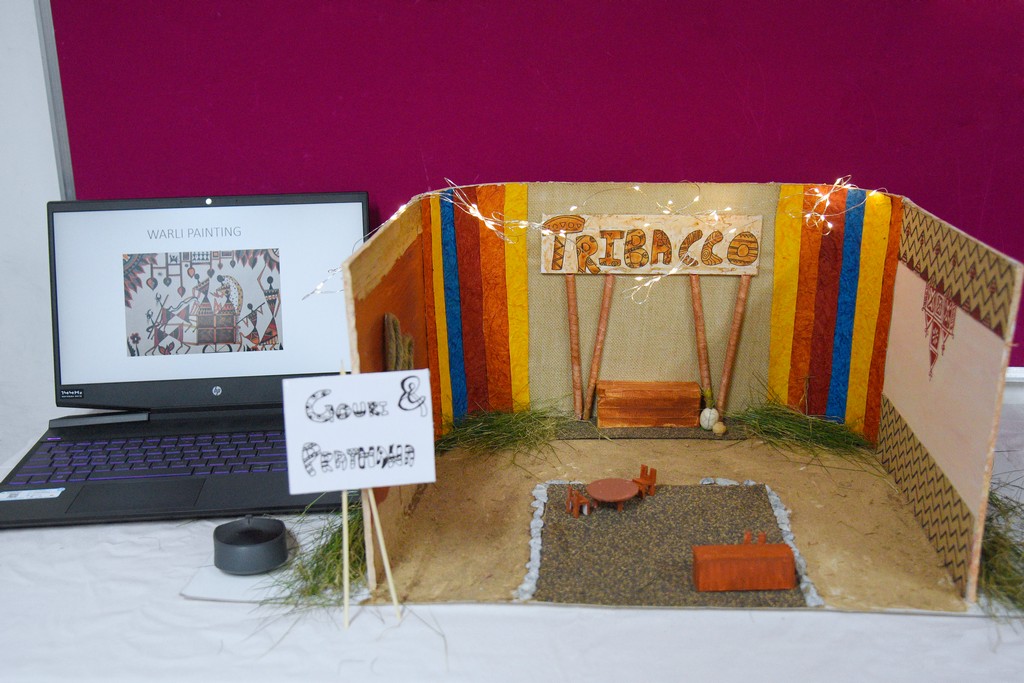 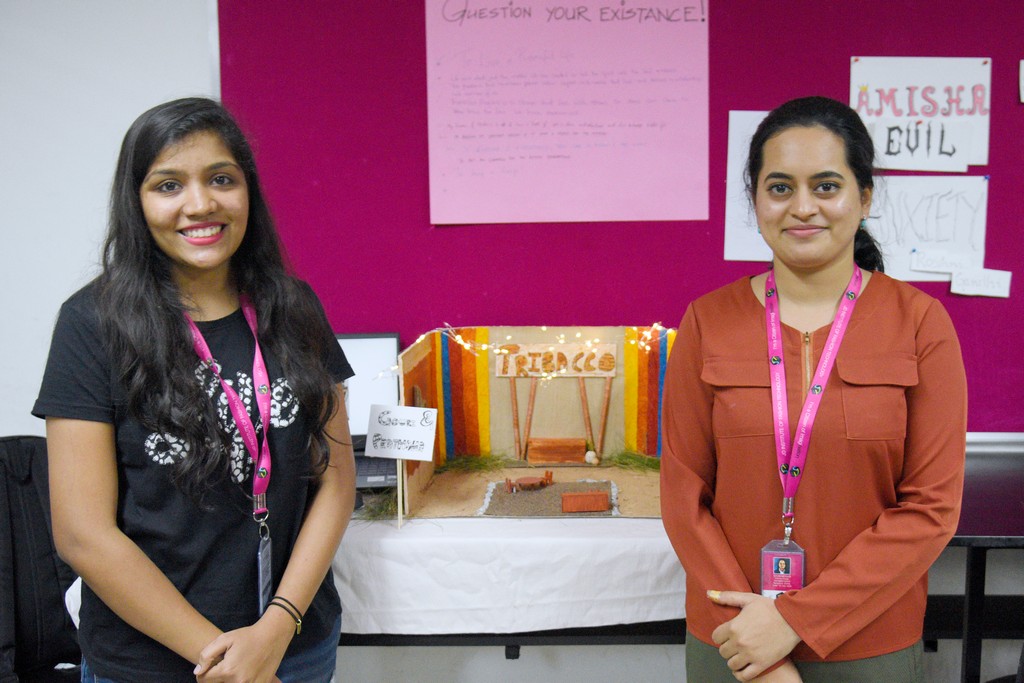 Tribacco was a tribal themed café which would be based in Bangalore. Concept was inspired by the tribes of South India with an emphasis on Karnataka and Africa. One wall was decorated with Bheenth Chitra, a wall painting to create visual texture to represent Karnataka. Whereas a wall made of mud, concrete and stone reminiscent of walls in African villages was installed with jute plates to create radial balance. The concept centred on maximising resources with the usage of timber furniture. Grass was incorporated in the interior for seating alongwith chairs and tables. The name of the café offsetted by the African jewellery colours formed the focal point of the space. 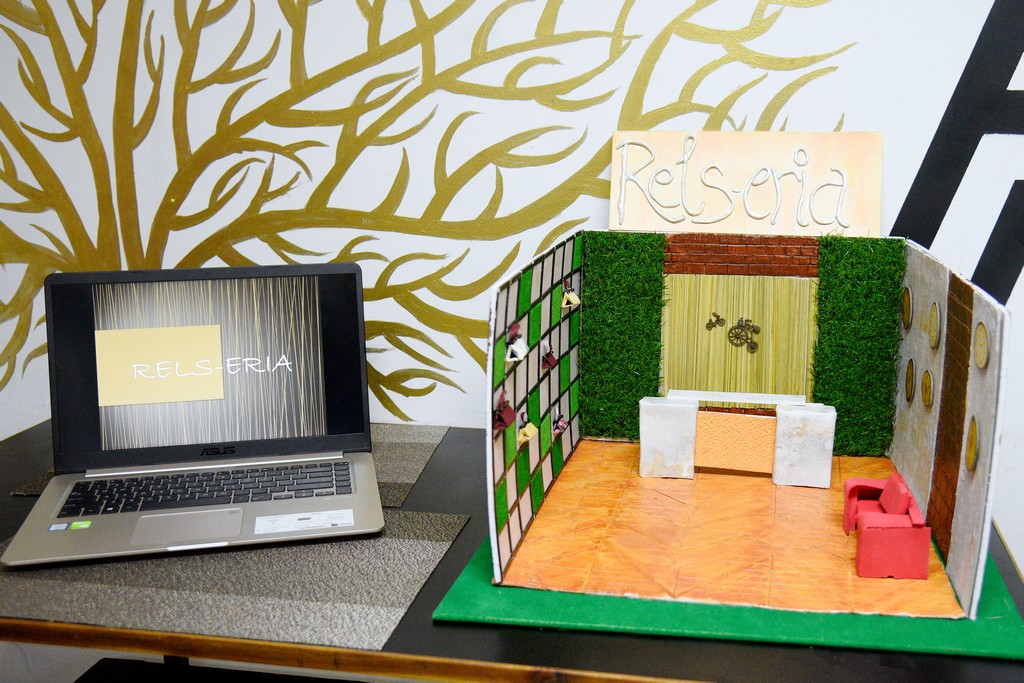 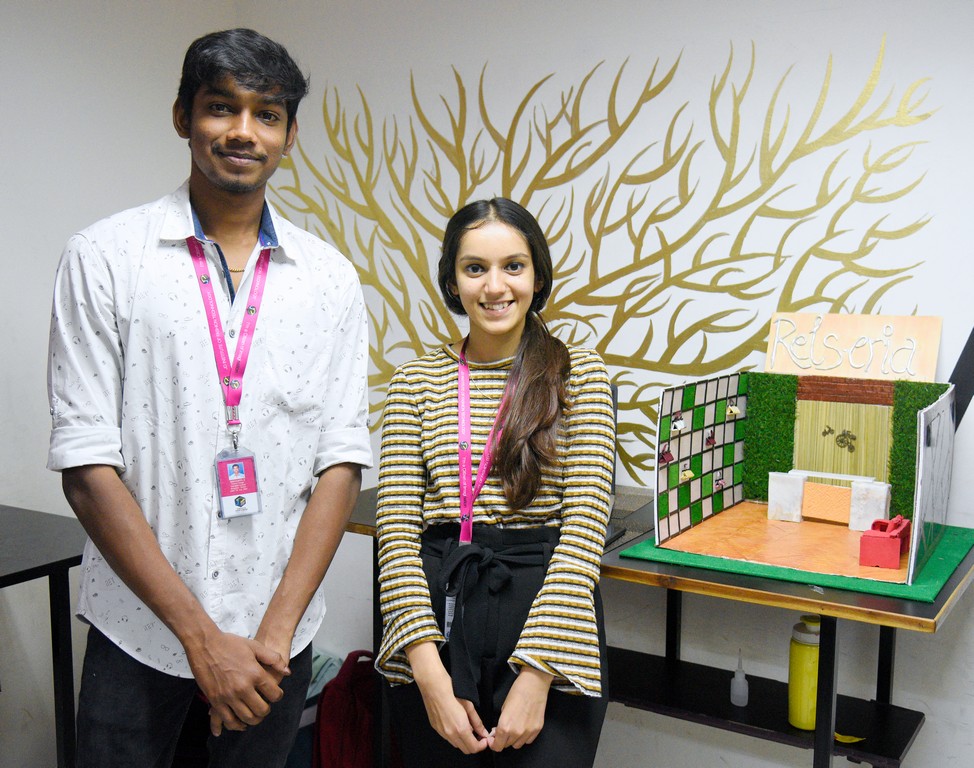 Rels-eria, a wall clock and handbag showroom was designed to be based in Argentina. Rels means bag/handbag in Spanish whereas Eria is a Spanish suffix for store. The theme of the store was inspired by fossils which was evident in the distressed wooden floors to resemble fossils. Argentina is known as a rich source of fossils and was aptly chosen as the location for the store. The overall design presents visual and tactile textures. The fusion of symmetrical and asymmetrical balance has been incorporated to define and create a relaxed look. 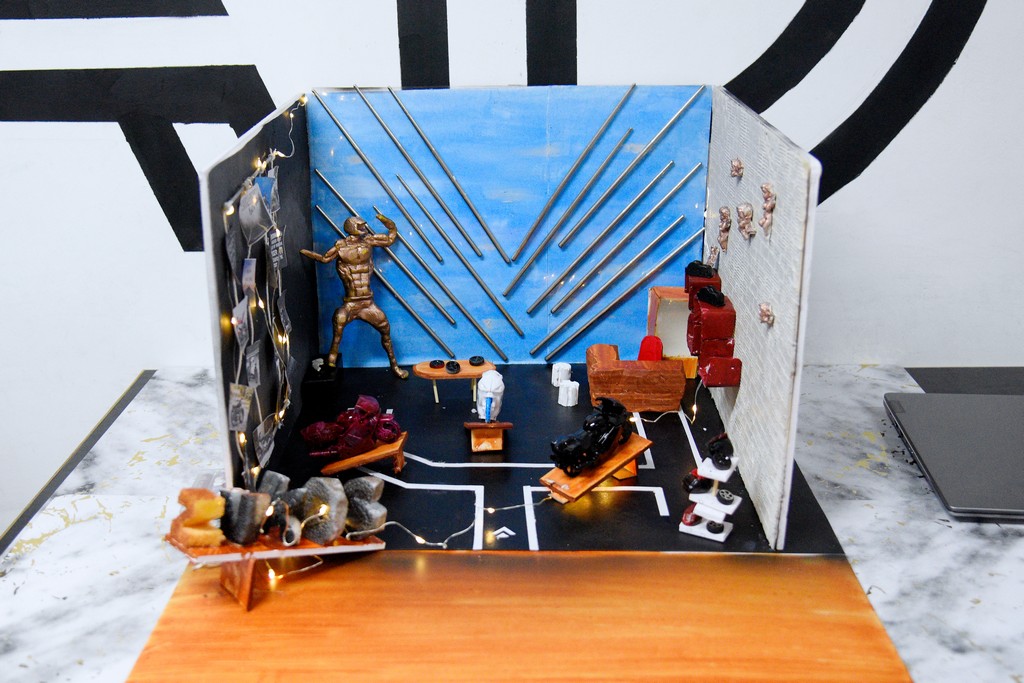 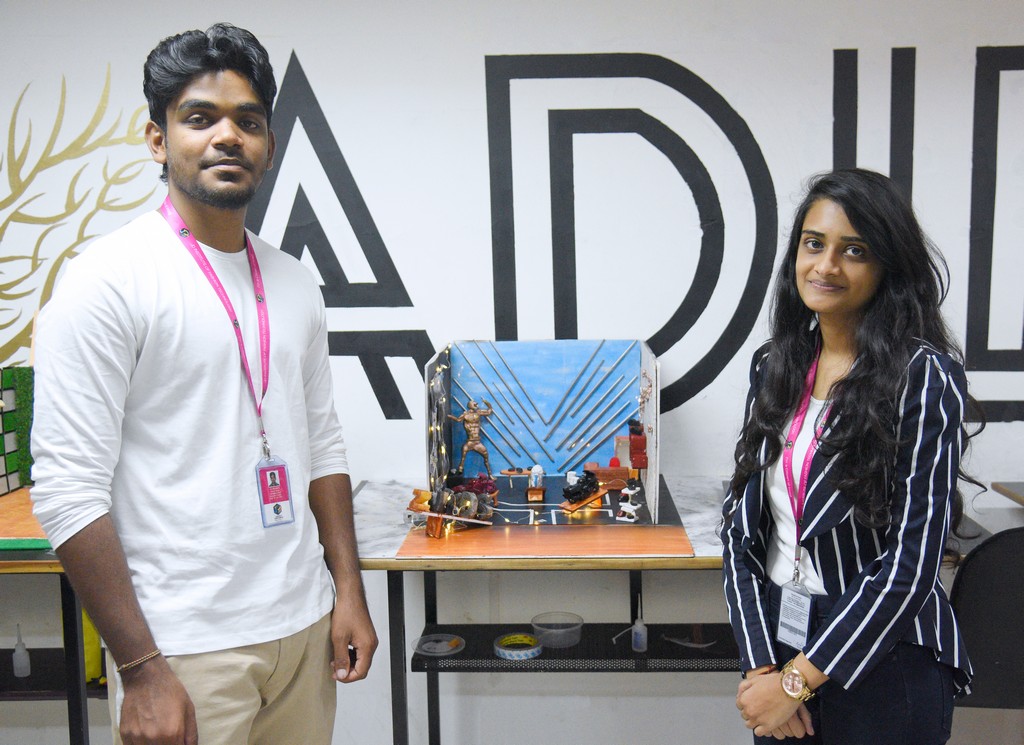 Zukos, a bike showroom to be located in Paris was inspired by the Roman God of Lighting by the same name. The design inspiration was influenced by the Royal Enfield showroom at Whitefield. Going forward with the Roman theme, the designers have incorporated Roman architecture inspired elements like the stools that resembled the pillars found in Rome. A Roman figure with a helmet was placed in front of the bright blue wall to counterbalance the colour of the wall and the figure. Also lines incorporated through the metallic rods on the blue wall provided visual interest. The Roman colours – Blue, white and black were used on the walls. Two of the walls were concrete whereas the wall with cupids was made of concrete. The designers also included quotes on the wall. The flooring resembled a road. 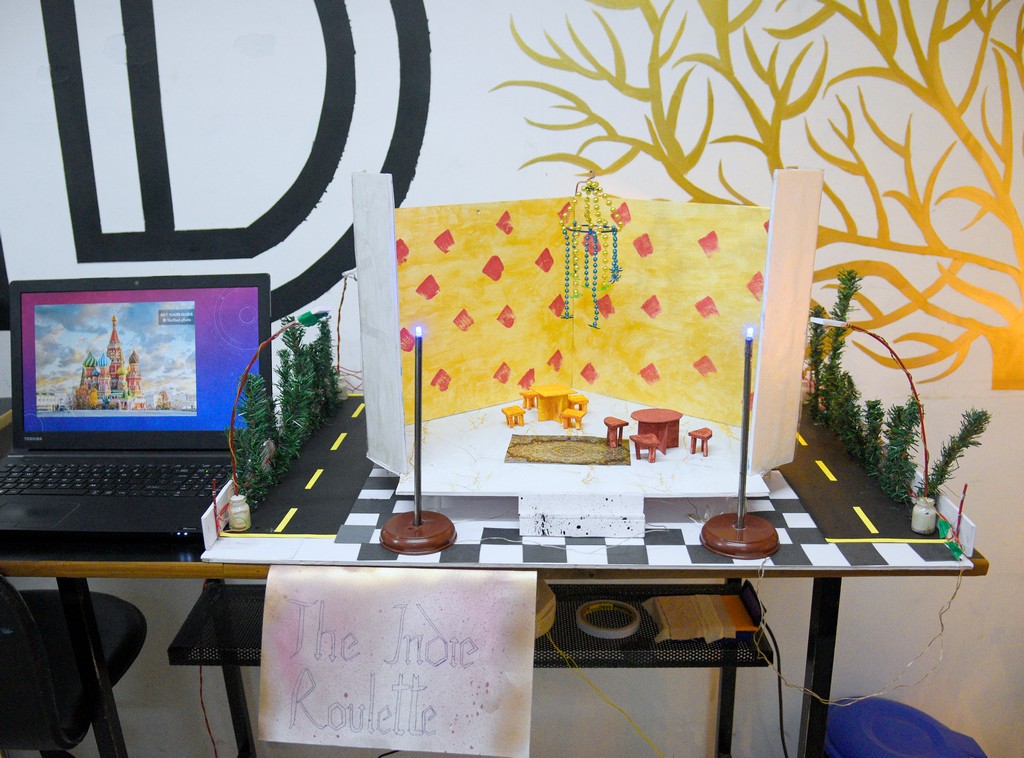 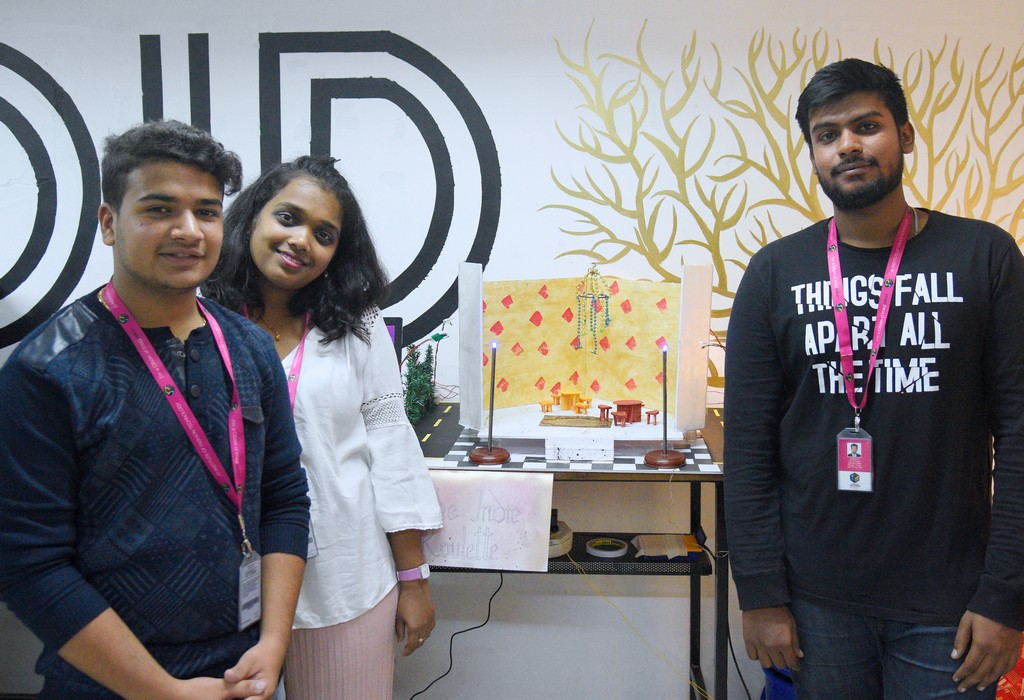 The Indie Roulette, an Indo-Russian furniture store was envisioned to be located in Russia. The Russian aesthetic for grandeur and flamboyance viewed in some of its country’s architectural landmarks was in conjunction to the rich colours, texture and design of India. The bringing together of the two countries design aesthetic and products under one roof would help resonate with the Russian and Indian customer base alike. The influence of India was evident in the Rajasthani mirror work and the handwoven rug. The furniture was minimalistic and the store was high on space conservation. The focal point was the chandelier and the golden painted walls with red paint patch work. The colours used on the walls are traditional Russian and Indian colours like red, blue, green and saffron respectively. Whereas, Golden is a royal colour in both Russia and India. Geometrical shapes of the furniture, mirrors and the paint patches provided a symmetrical balance. 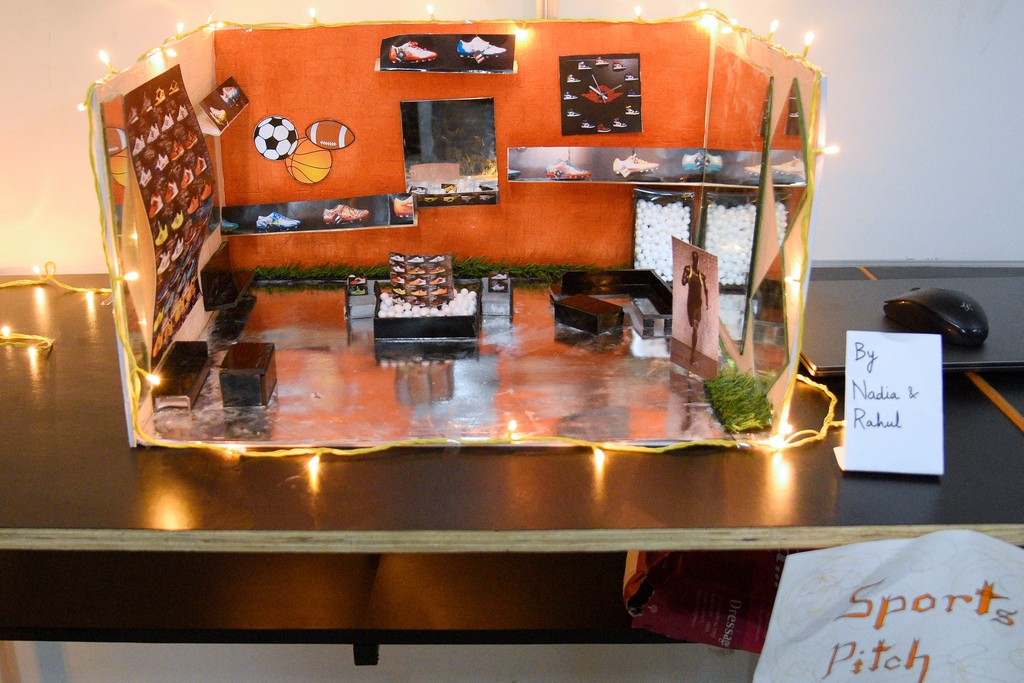 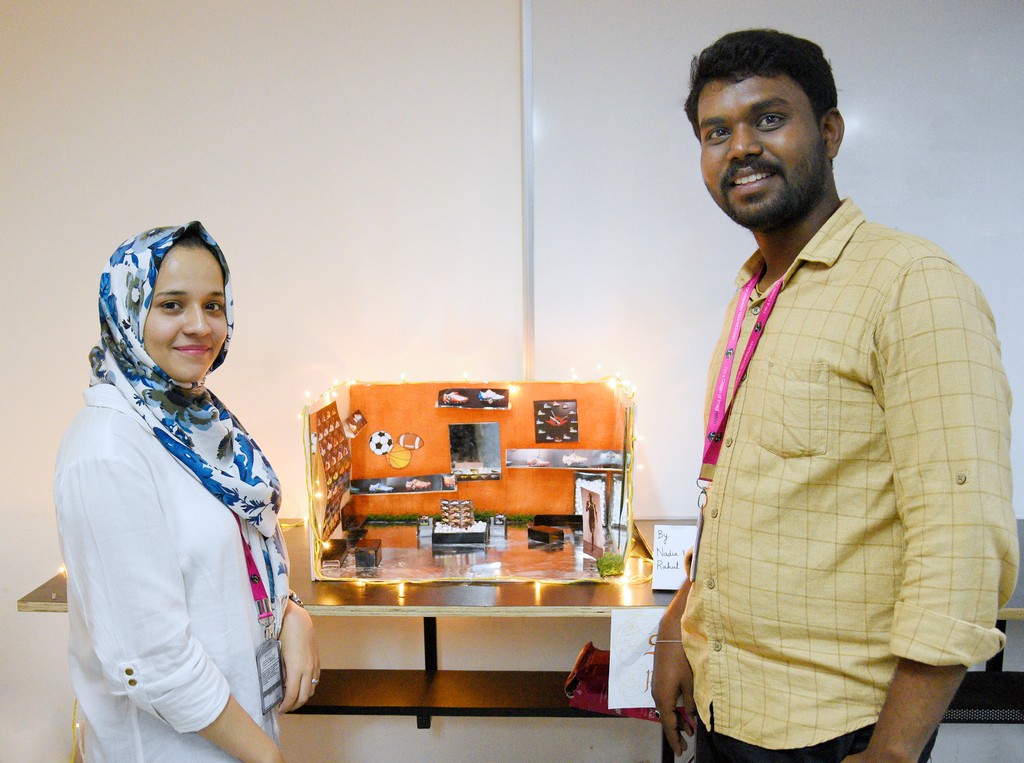 Sports Pitch was a sports shoe store which would be based in Bangalore. The store was highlighted by the colour Orange which denotes strength. Huge mirrors dominated the walls to make the space look large. Furniture provided a sense of unity by harmonizing other features of the space. Grass was incorporated to create a soft look. 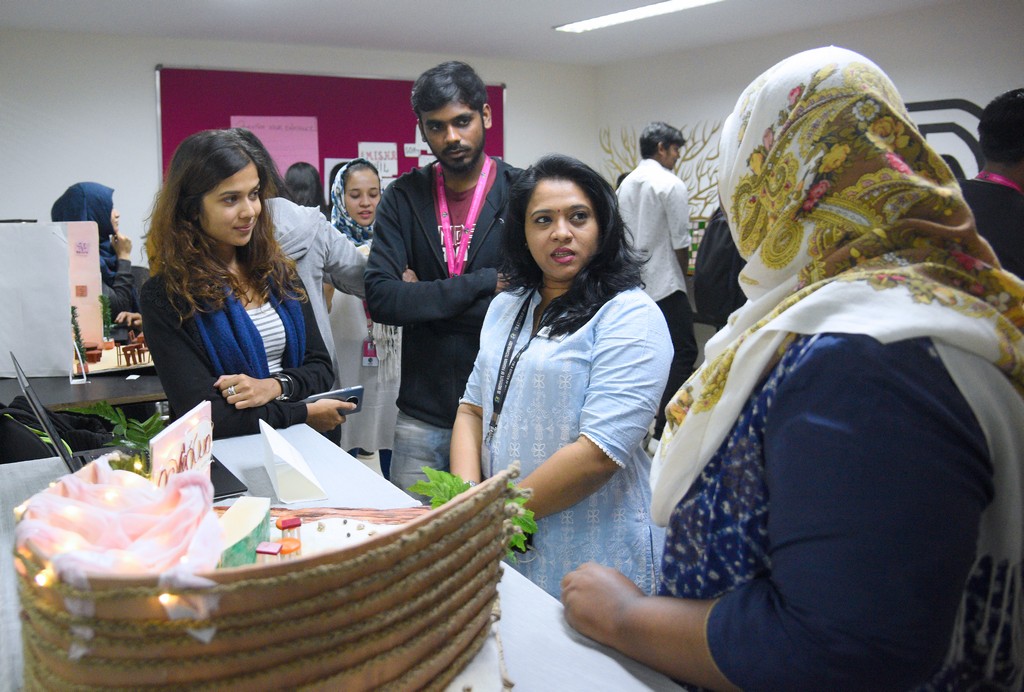 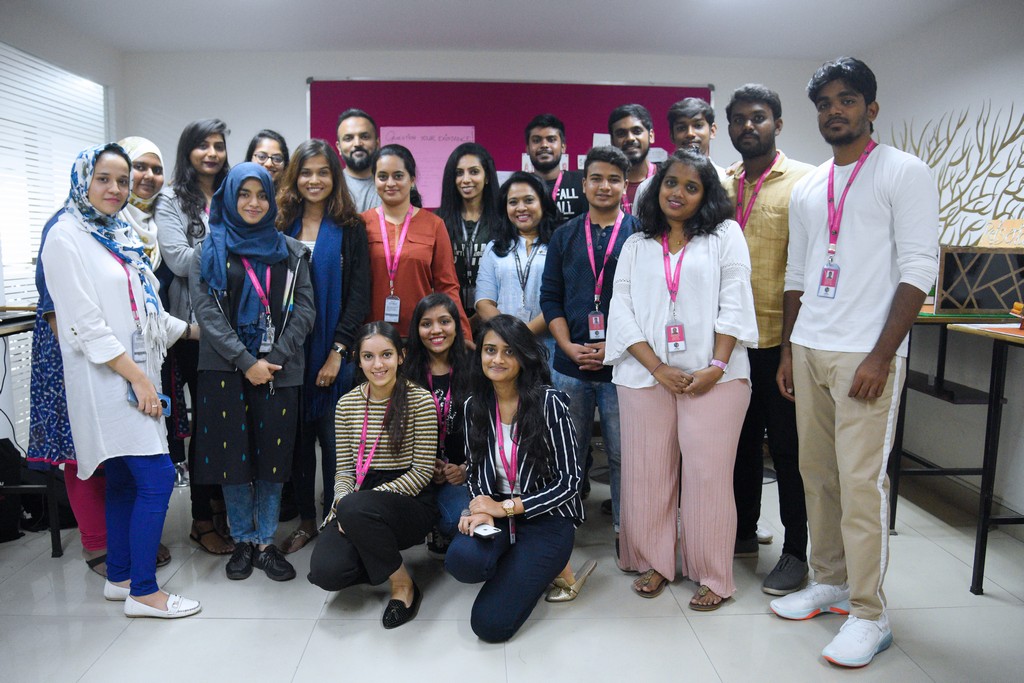