A PLAY OF NATURE AND ZERO WASTE IN DRAPING 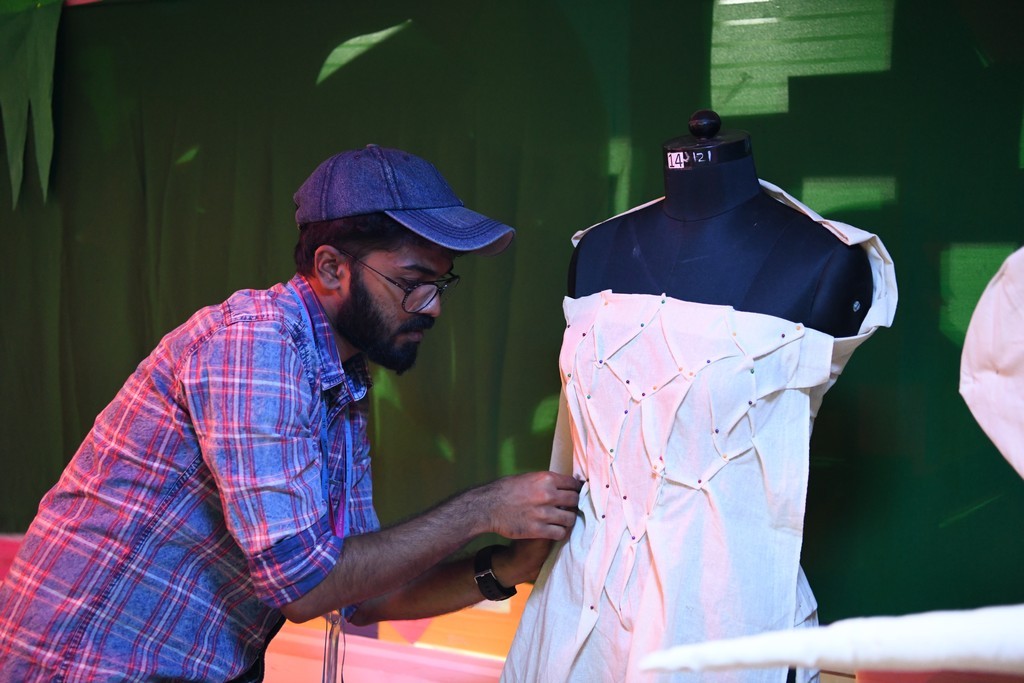 The students of Diploma in Fashion Design 2019 presented a draping display centred around the theme of nature along with a zero waste draping concept. The presentation of the theme found the students reaching into their creative crevices to represent the theme by bringing out the best of nature and its many gems.

To keep in tandem with the theme, the display space was converted into a forest with audio sounds of waterfall and nature. The pillars and walls were decorated to resemble grass and flowers along with changing lights that elevated the ambience of the showcase area.  Muslin cloth used for the draping was manipulated or hand painted to resemble respective inspirations.

Following are the representations of the theme conceptualized and recreated by students.

The Spider web was chosen as the inspiration as it personifies perseverance of the spider and its determination to complete the web. The initial stage of spinning the web can be compared to the foundation of a house. The spider rallies to complete the pattern by moving back and forth to strengthen the web and create a pattern. The student translated the process of making a web by using a black yarn and placed it over a long muslin gown with a simple sleeveless bodice and gathered skirt which formed a canvas to showcase the web. 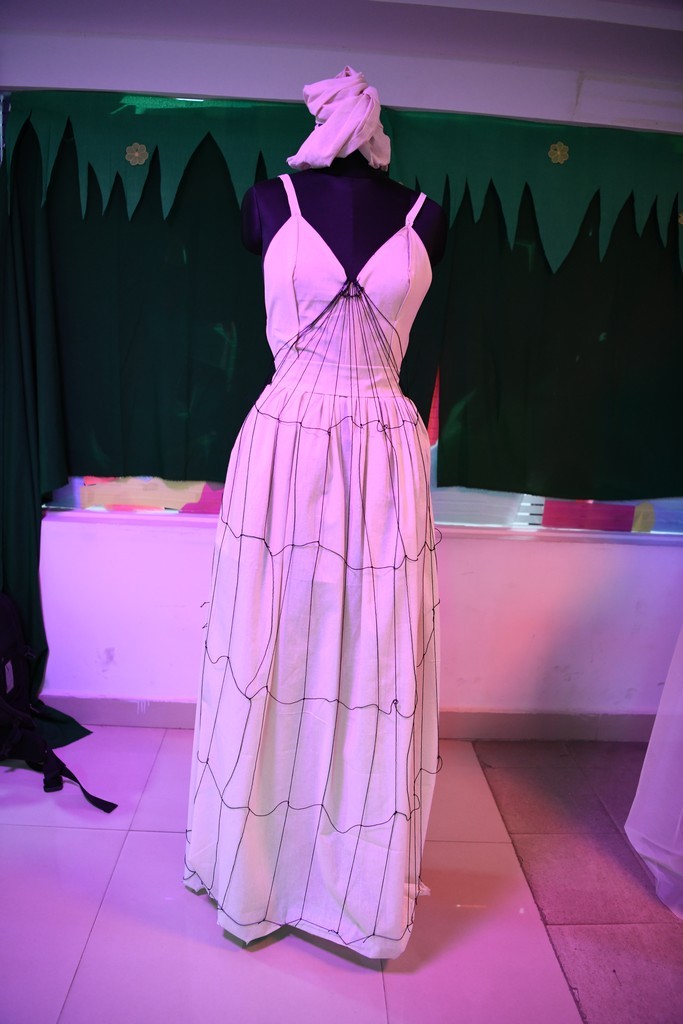 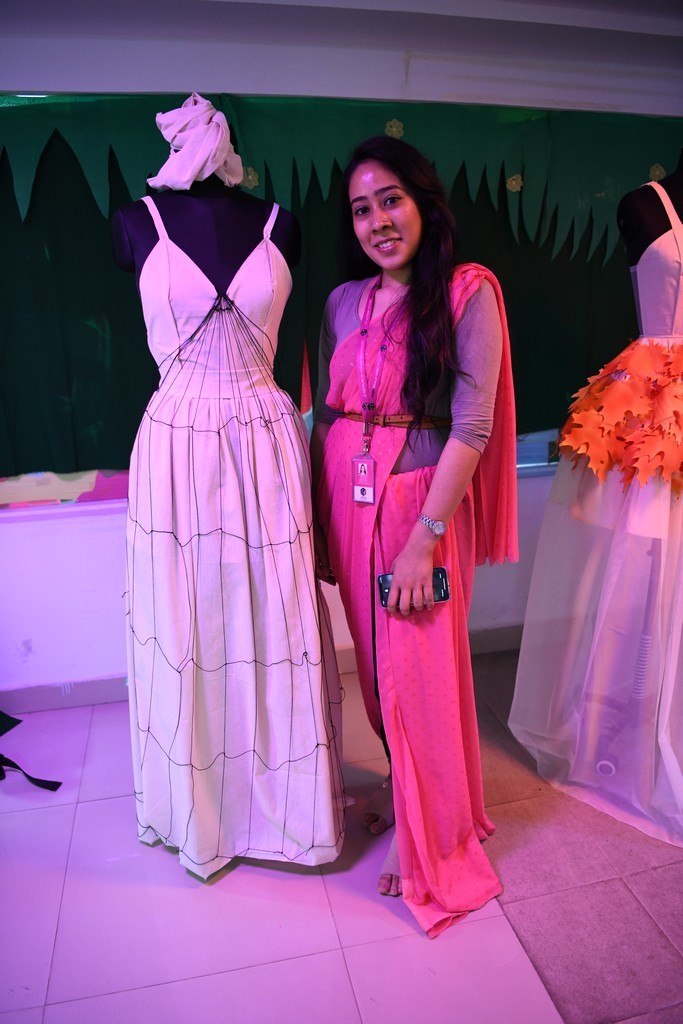 The student was inspired by the autumn season. The orange hued leaves are the significant feature of the season. Autumn symbolizes new beginnings, whereas its leaves are indicative of the shedding of old memories and struggles of life. The sleeveless v-neck dress had two layered circular skirts under a netted circular skirt. The bodice was kept simple to draw focus to the hand cut and painted fabric in the shape of autumn leaves placed on the layered skirt. 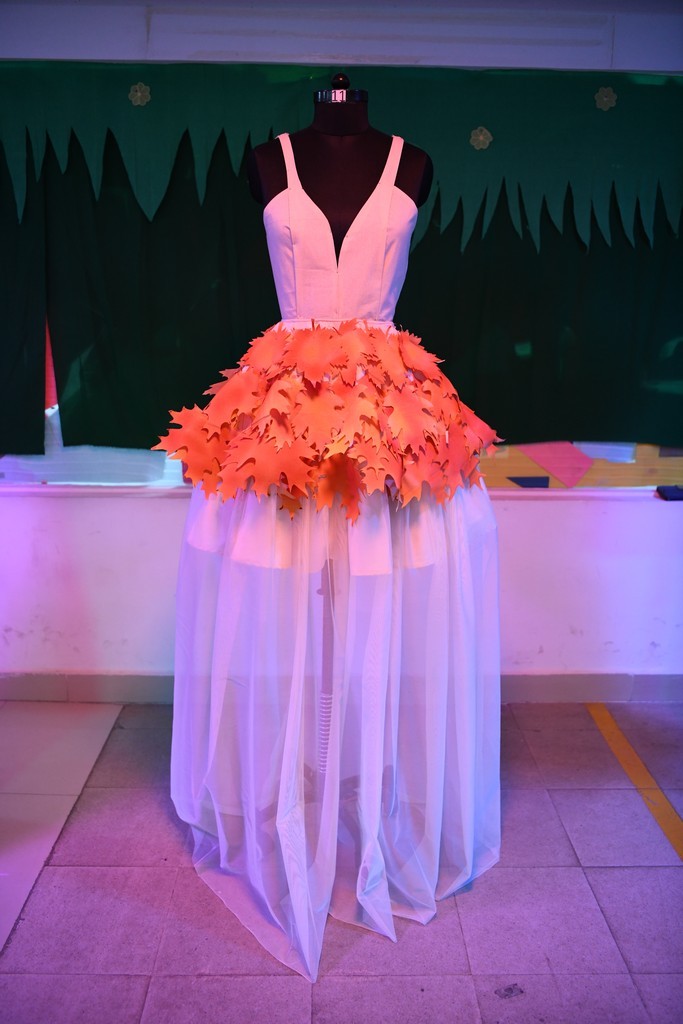 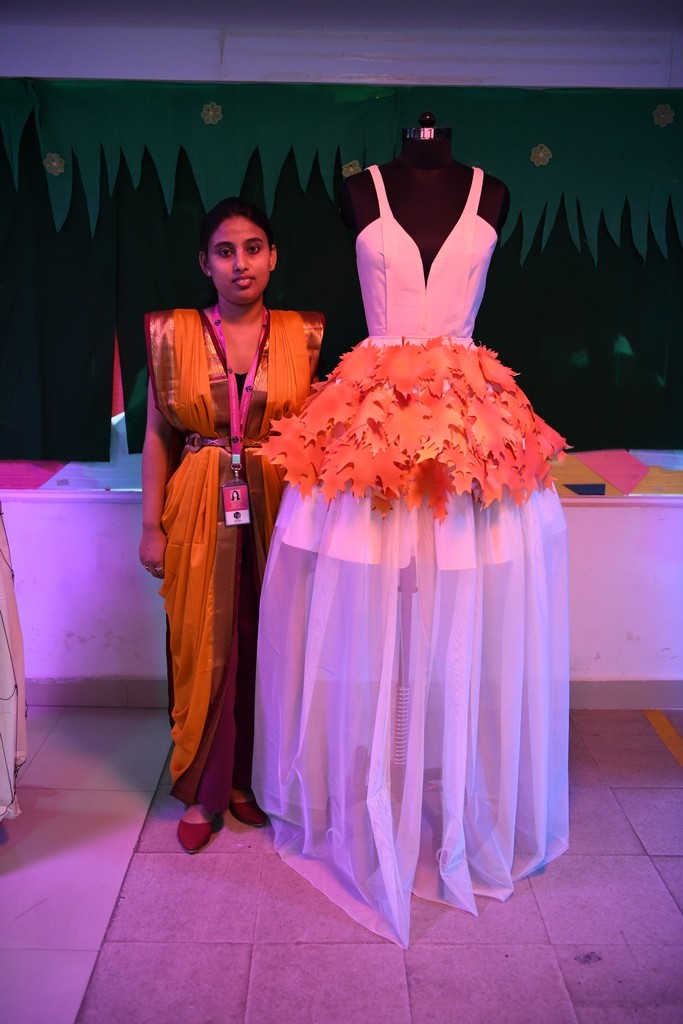 The Honeycomb pattern formed the inspiration for the nature inspired drape. It is one of the perfectly shaped and organized forms. The honeycomb symbolizes cooperation that exists within the group and is also a symbol of life and peace. The pleated bodice symbolizes the body of the honeybee, whereas the bottom was shaped to resemble the honeycomb. 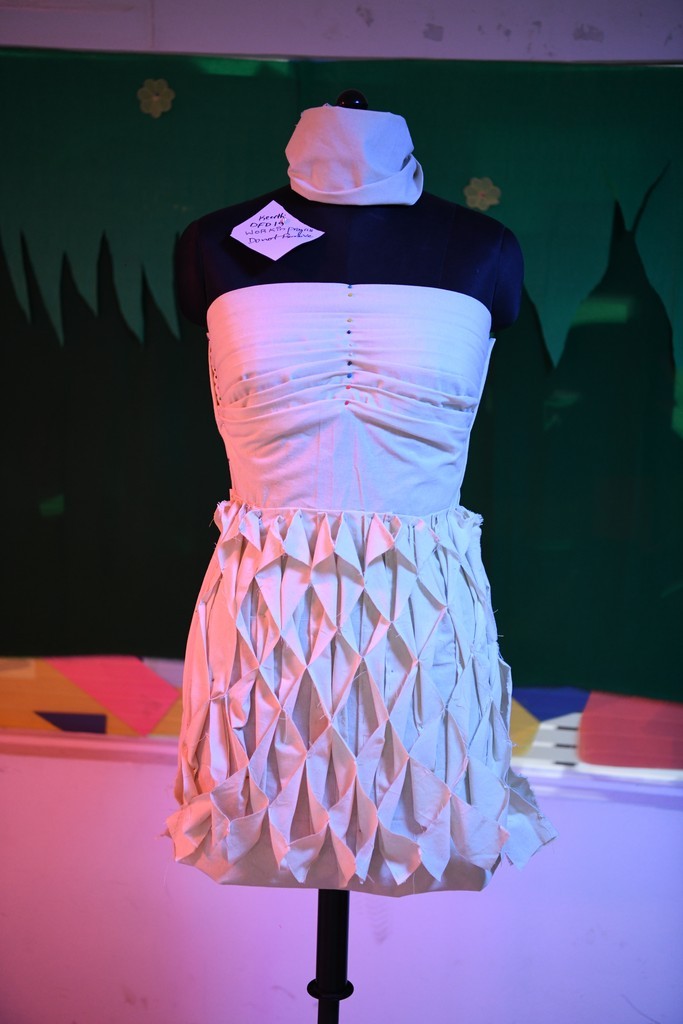 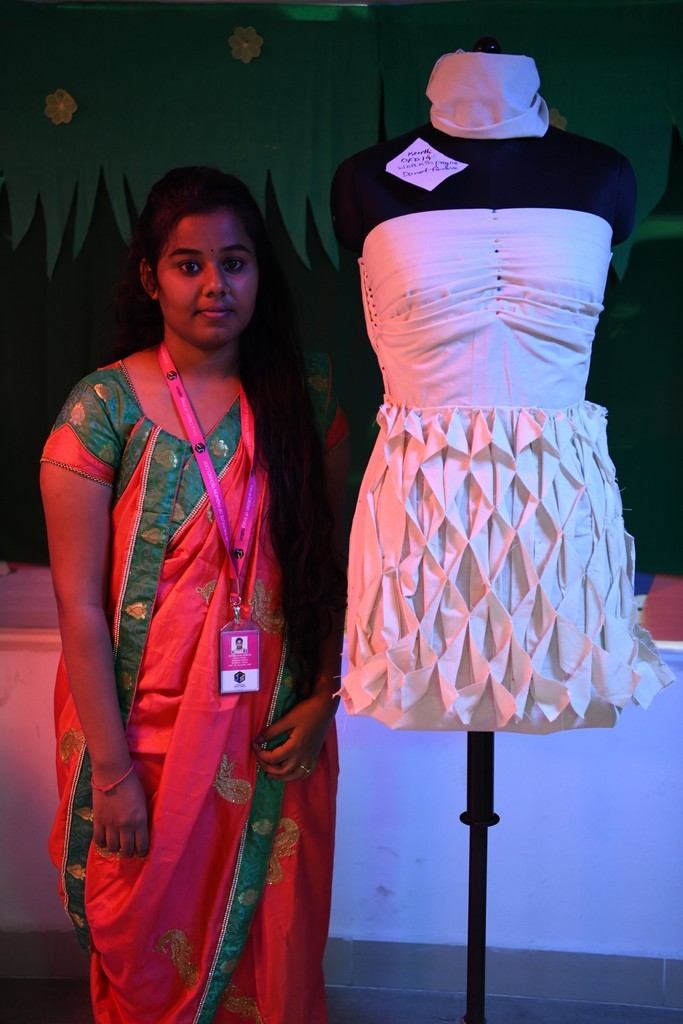 The student paid an ode to Elephants inorder to draw attention to their plight. Elephants are poached at an alarming rate for their ivory tusks. This has led to the dwindling numbers of the species which could lead to its eventual extinction within a short span of time. The bodice of the dress was shaped as the face and trunk alongwith the tusks of the elephant over an asymmetrical skirt. 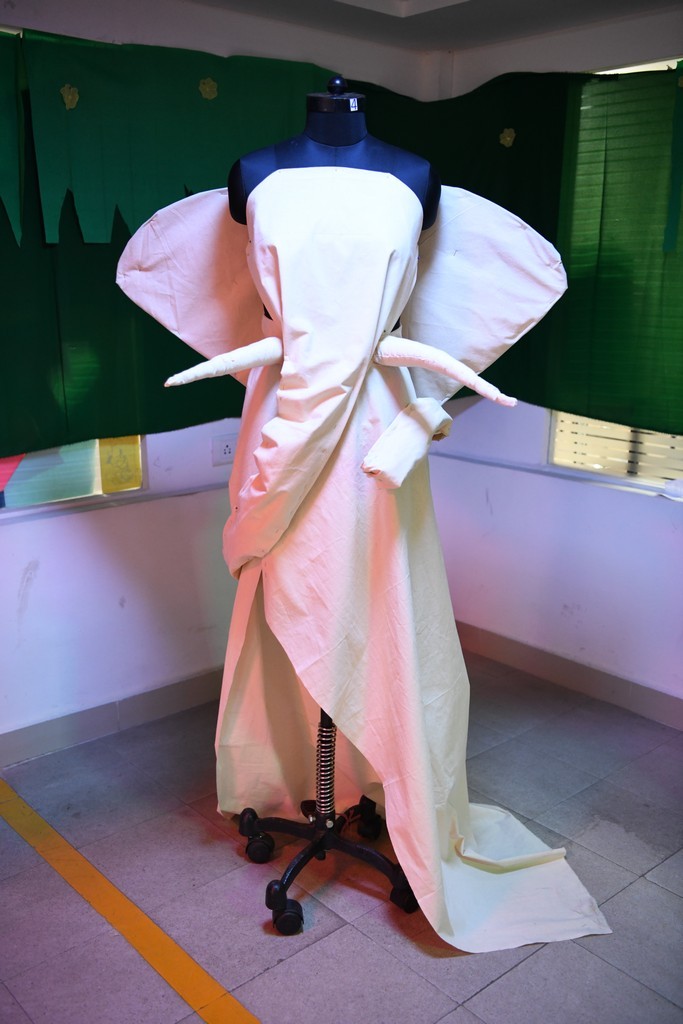 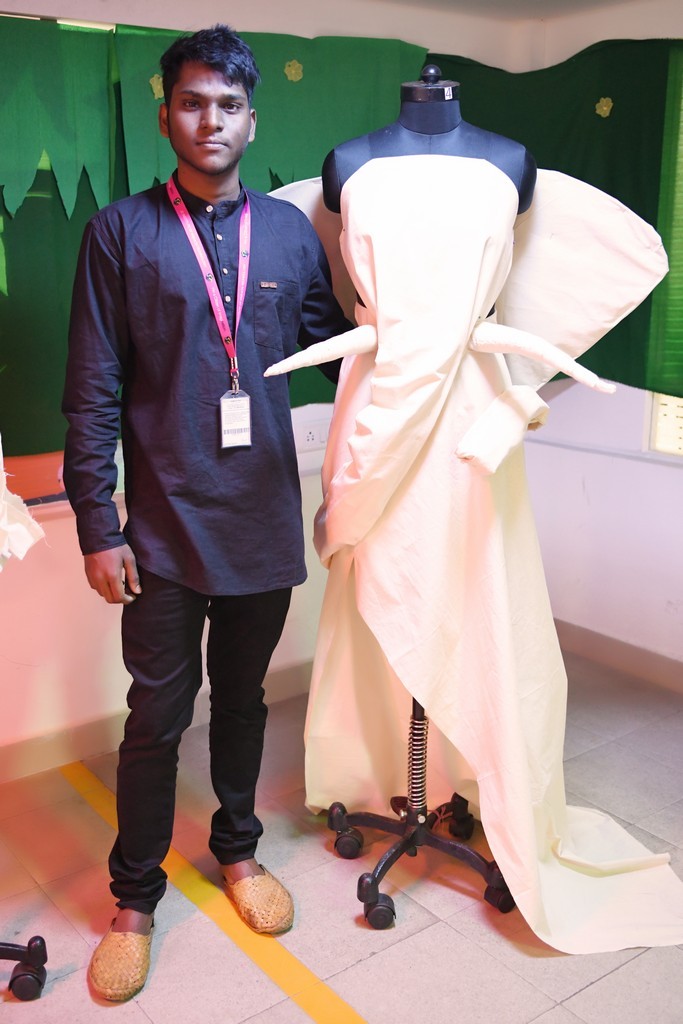 Spherical Aloe Vera was the inspiration for the nature based draping. The top of the dress was fashioned to resemble the leaves of aloe vera, which were individually cut out of the muslin fabric and placed in a spherical shape atop a basic bodice. The colour green was hand painted to the borders of the leaves. Whereas the skirt was fashioned into a Tulip shape with green hand painted pleated edges. 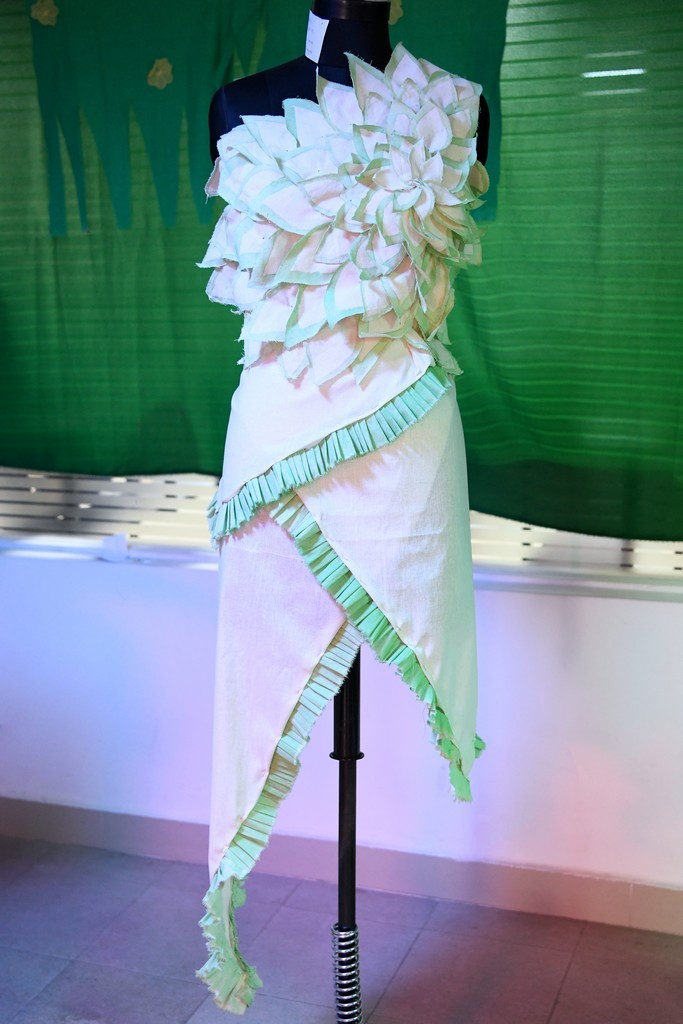 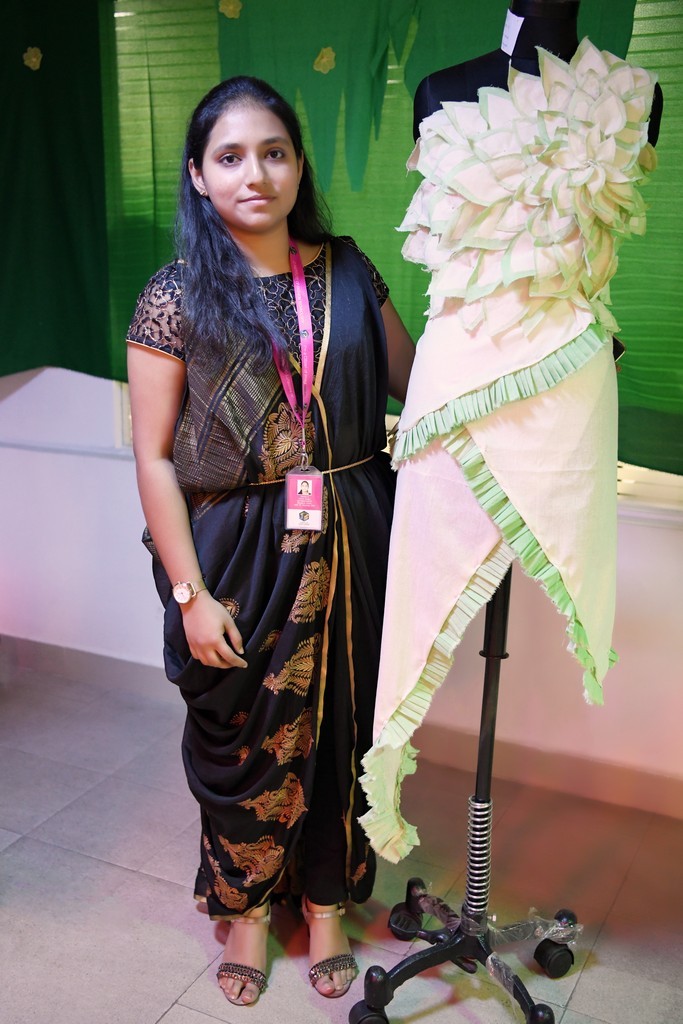 The student’s zodiac sign Scorpion was the inspiration for the draping. The pleated technique was used for top and the back of the dress alongwith a basic skirt. The remainder material was used to create the legs of the scorpion. 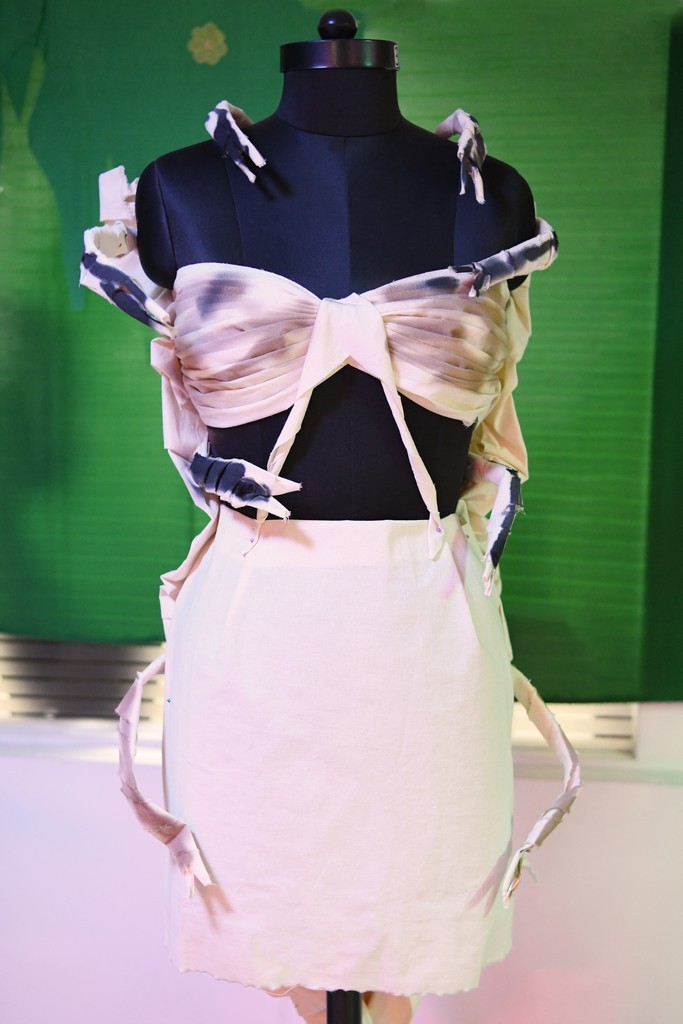 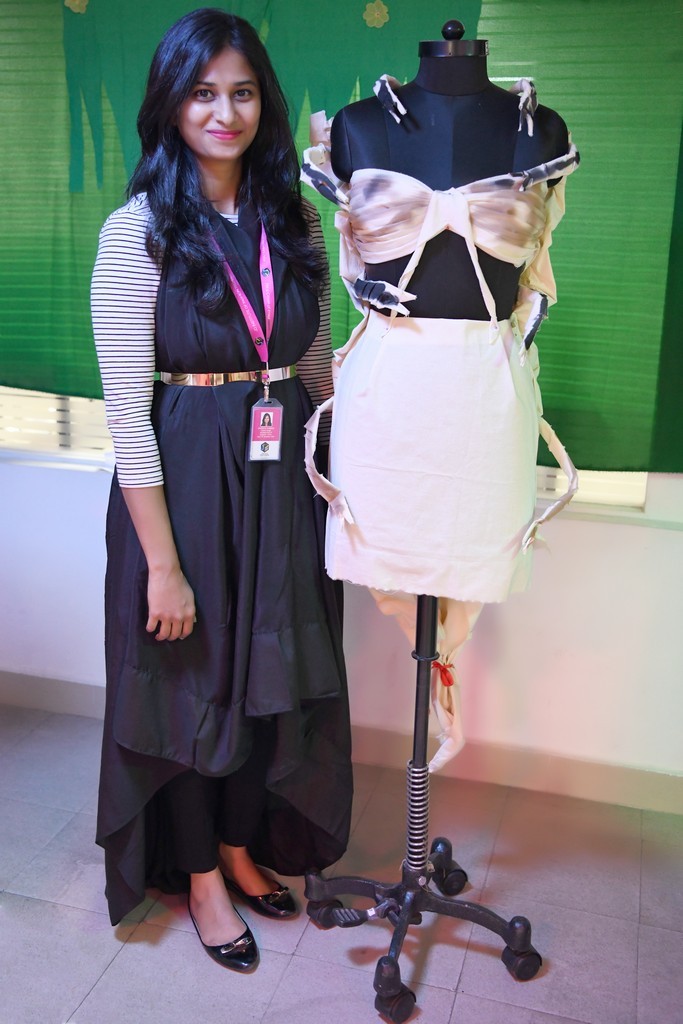 Peacock, the national bird of India was the inspiration for the draping. The colours of the peacock are a celebration of life and denote happiness. Fabric was cut in the shape of the bird’s feathers,hand painted and placed over the high-low skirt. The one shouldered top was created to resemble the beak of the bird. 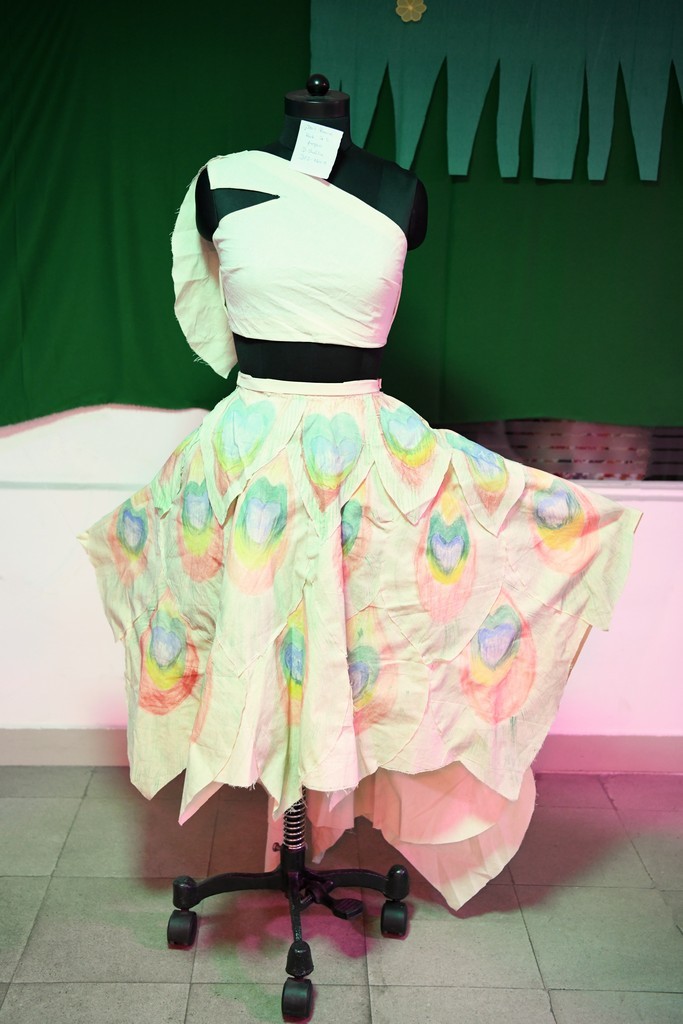 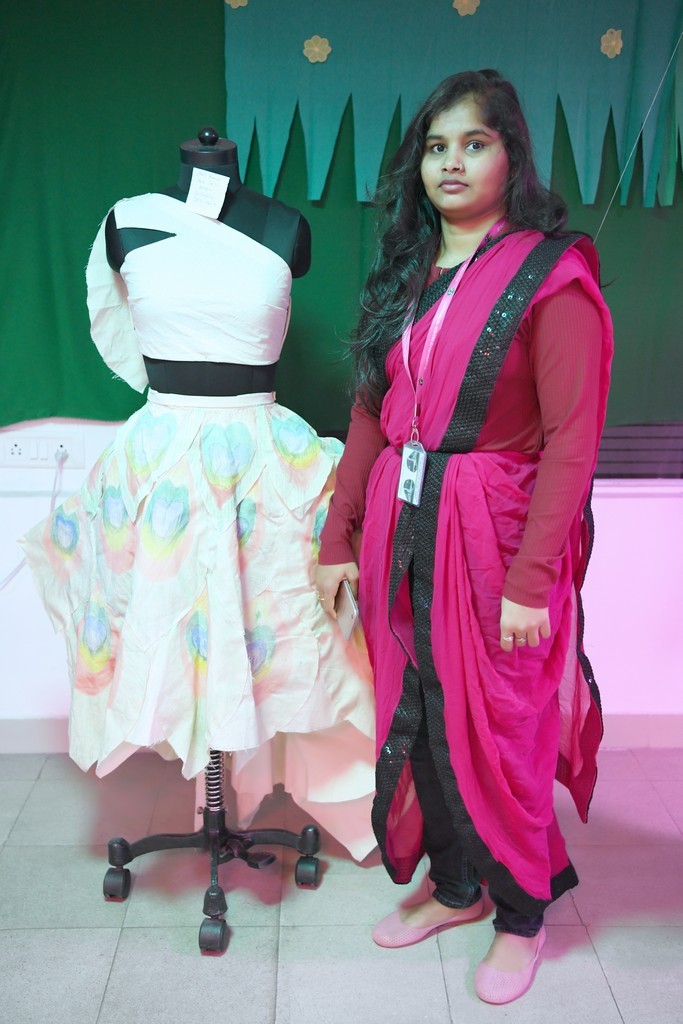 The inspiration was drawn from the Mushroom which is known to have numerous health benefits. The draping was created to reflect the overhead plain and inward creased parts of the mushroom.  Inorder to create the inward creases; the sleeves, bodice and one part of the skirt were created using the pleated technique. Whereas, the plain portions resembled the plain part of the fungus. 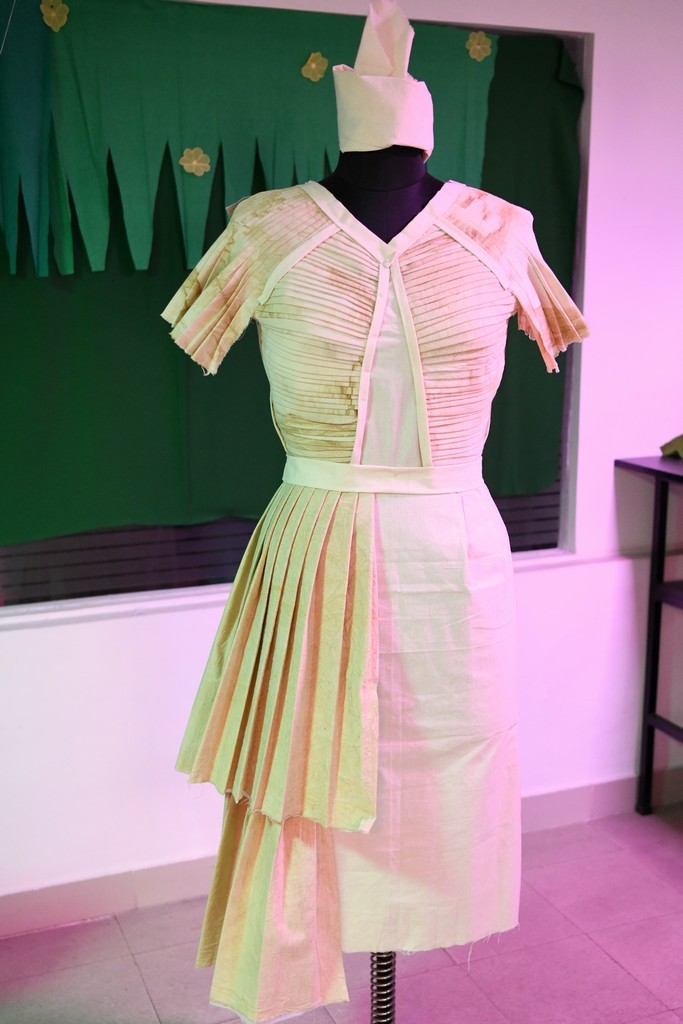 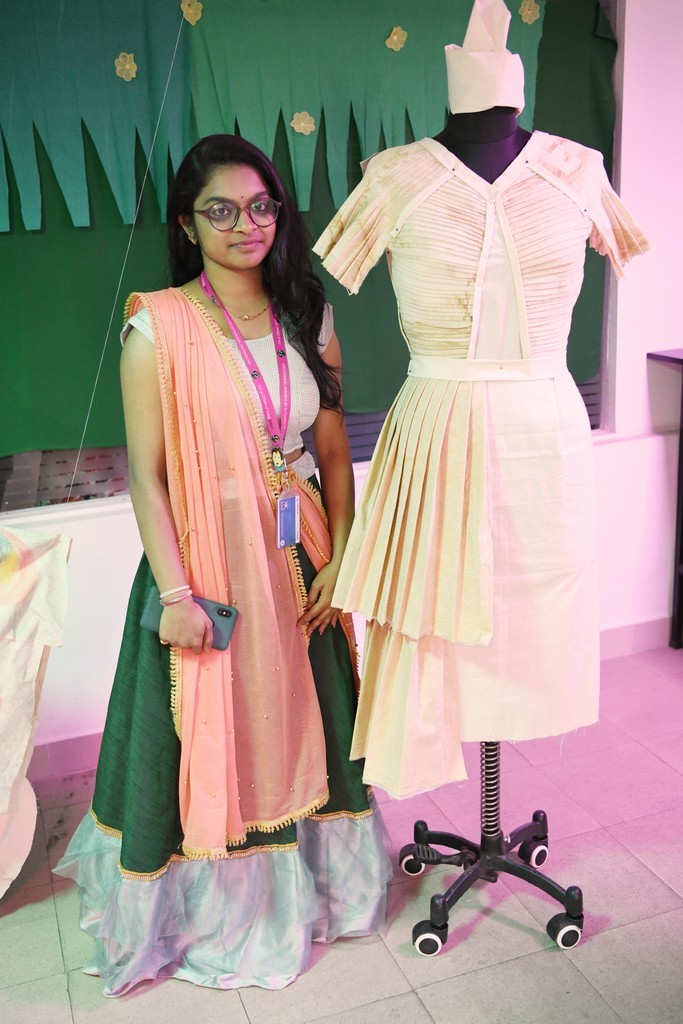 Lotus was the inspiration for the draping. It is considered to be a symbol of purity and presented as an offering to Gods. Despite growing in the mud, it blooms well and is awarded the status of the national flower of India. Taking this aspect of the flower, the student created a long gown wherein the bodice was shaped like the petals of the lotus flower and hand painted in colour pink which is its main attraction. 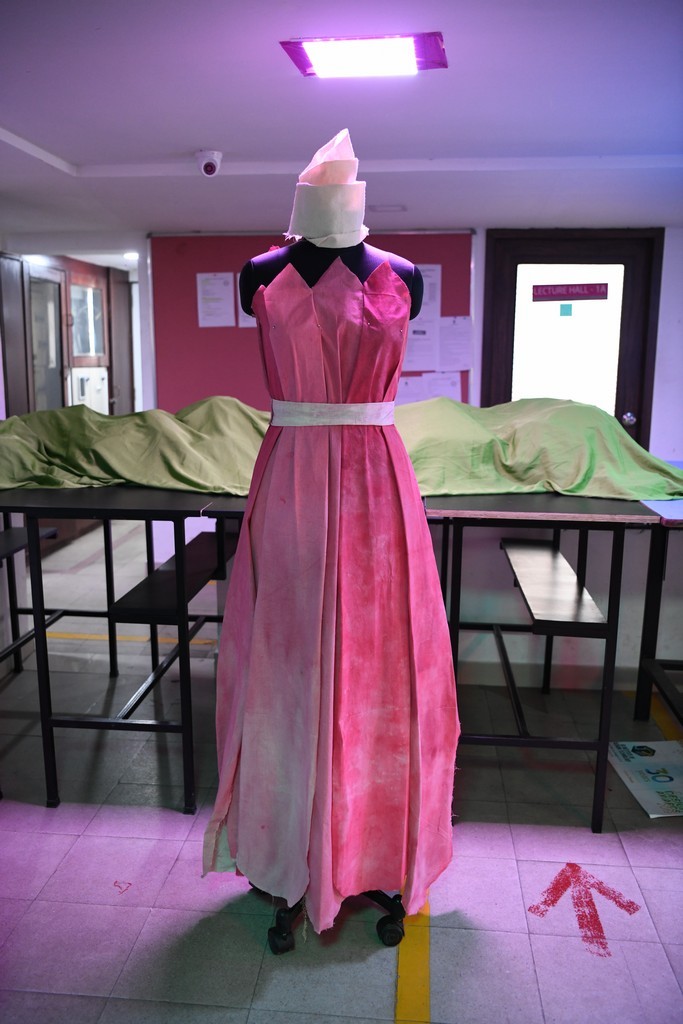 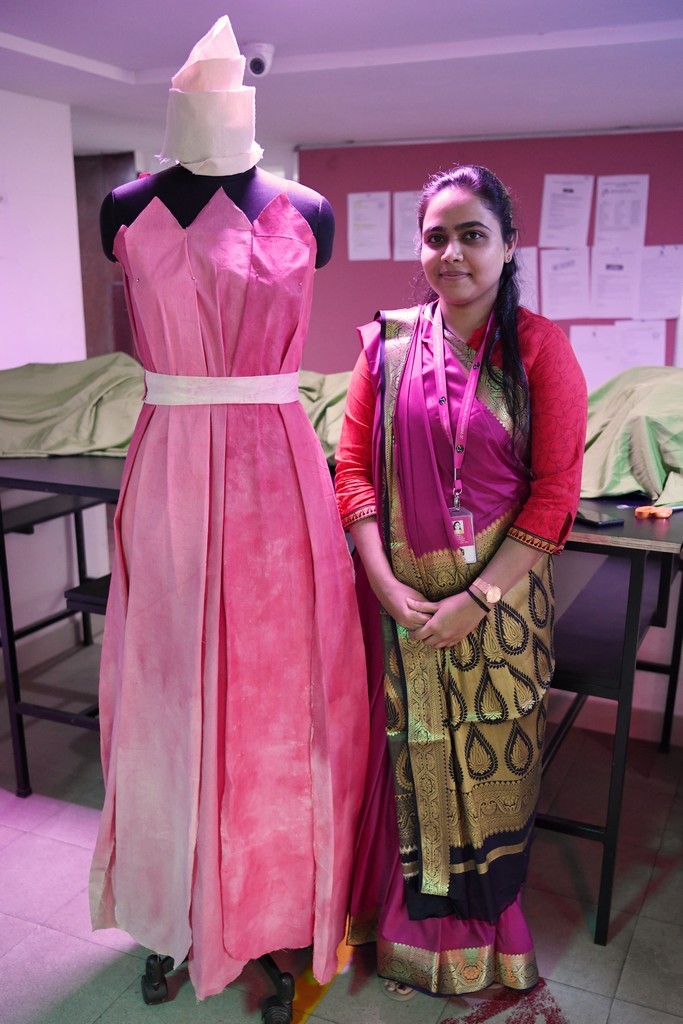 Butterfly was the basis of the inspiration for the draping. The student chose the insect for its bright and colorful wings. Butterfly is an emblem of happiness and positivity. The garment was an asymmetrical dress using the pleated technique to replicate the wings of the butterfly. 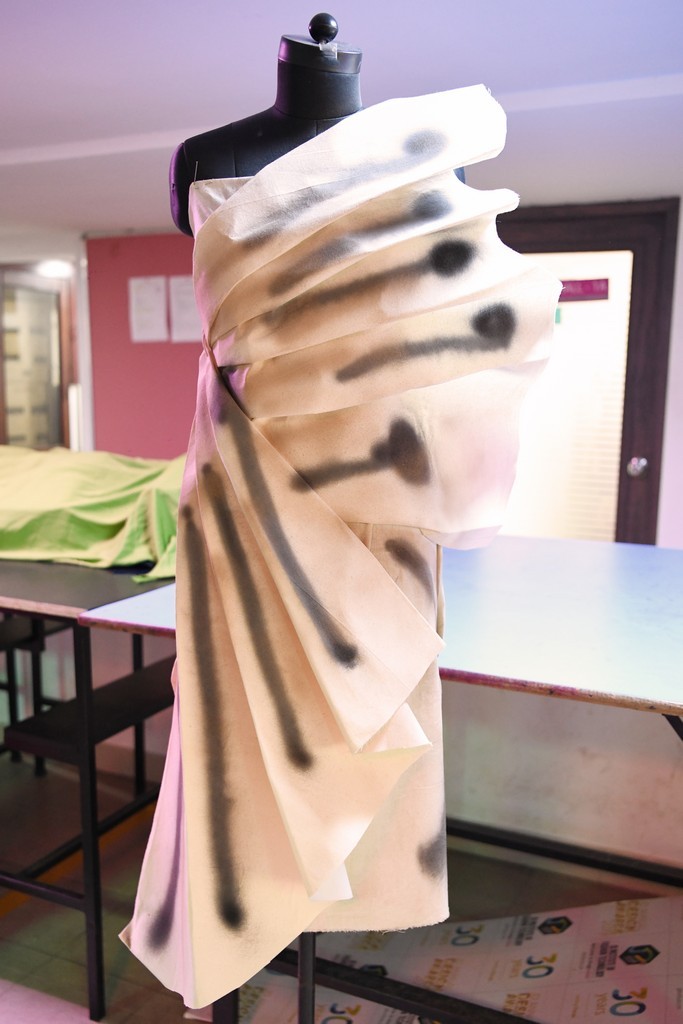 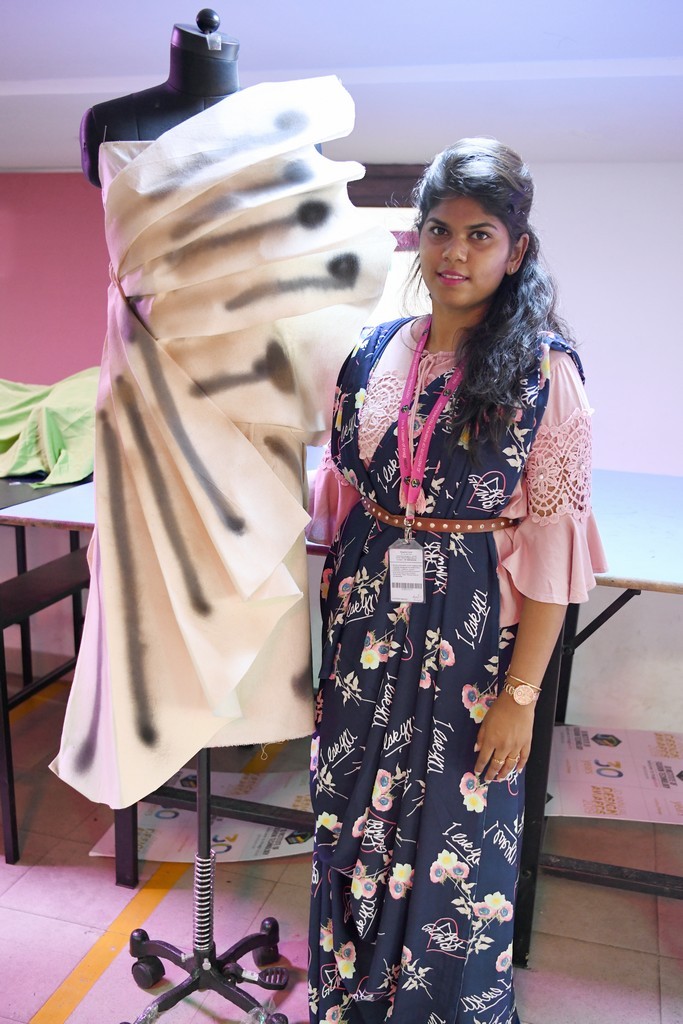 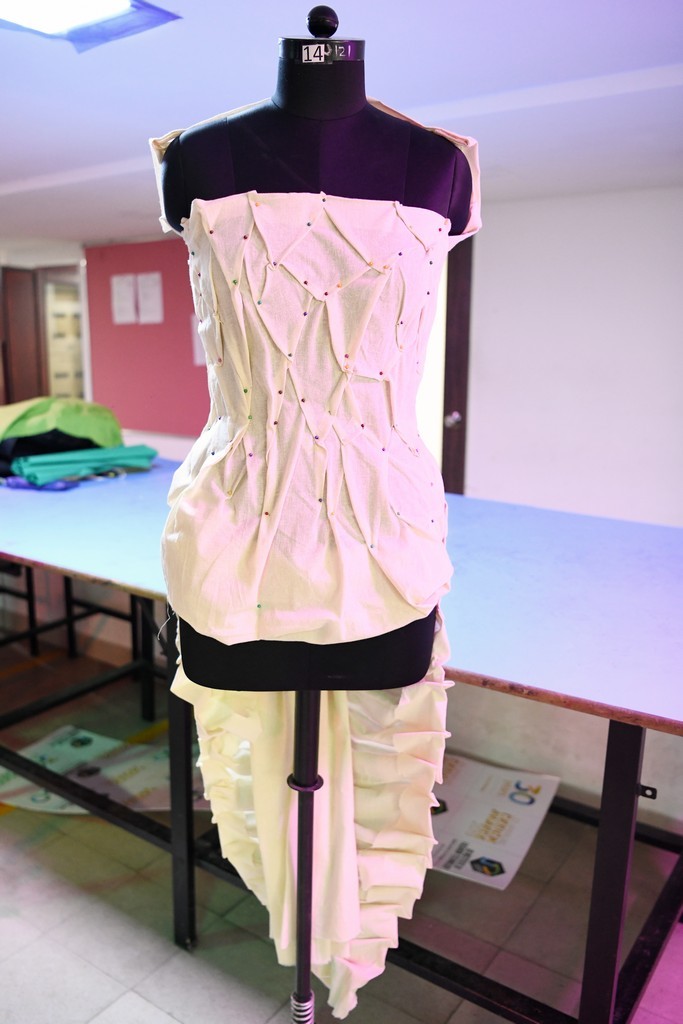 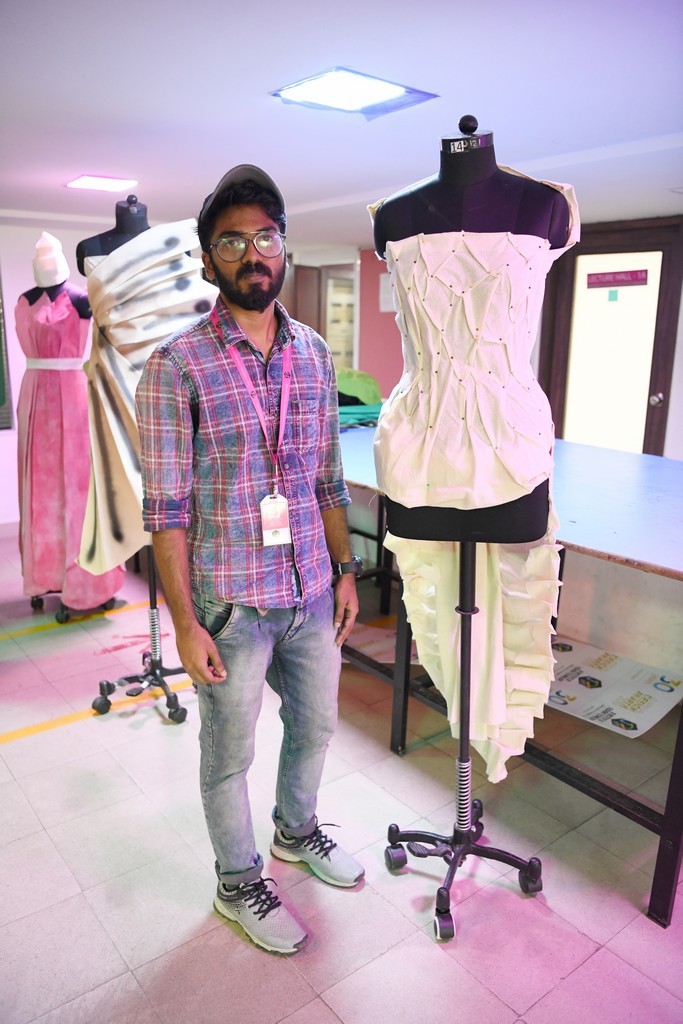 For the zero waste draping the students draped themselves in sarees. It is one of the versatile fabrics and can be used to create different variations. Some gave the garment a modern twist and some chose the conventional draping.

A PLAY OF NATURE AND ZERO WASTE IN DRAPING 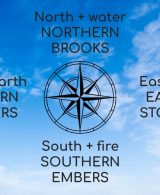