JD Institute of Fashion Technology, Bangalore brought in Halloween to its Brigade Road campus in the spookiest way possible. The ardor of the festival was evident among the students and faculties alike. All the departments came together to amp up the scare fest and created an ambience that was a scene right out of a scream movie.

Though an international festival the essence of the festival has caught on due to its relatability of recreating characters that we have deemed scary and the overall fun aspect of it. Scaring and being scared builds up an adrenaline and we take immense pleasure in both. Apart from dressing up, the elements associated with the festival further adds to the complete essence of the occasion.

Why is Halloween celebrated?

Halloween also known as Allhalloween or All Saints’ Day stems from the ancient practice of the Celtics over 2000 years ago. It is a pagan festival that believes that all the doors between the living and the dead opened up during this time of the year. People would light bonfires and dress in costumes to ward-off the ghosts. However, in the eighth century, November 1 by the order of the then Pope came to honour all saints.  Over the years, Halloween progressed into a day of activities like trick-or-treat, carving jack-o-lanterns, parties, wearing costumes and eating treats.

The Dept. of Fashion showed their skills by styling and being dressed in to the T as dead schoolgirls, scary nurses, black cats, etc, and roaming around the campus. Researching and getting the essence of the character right is instrumental and was evident in the way the students dressed up.

The Dept. of Interior used their sense of space and design to convert their class-rooms and corridors into unique, festive and not to mention scary setting. Carved pumpkins, wall art, balloons, skeletons, bats, scarecrows and candies were a part of the décor.

The Dept. of Jewellery used their skills to add accessories to complement their look which were handcrafted by them. Students were seen donning intricate headgears, witch hats, hand-painted belt, devil and angel eye mask and floral ear cuffs.

The Dept. of Makeup and Hairstyle Artistry created an equally scary make-up by recreating the classic skull makeup through the amalgamation of two ideas – Skull Makeup and Boss Babe. The student used different techniques to bring to life the Skull Boss Babe.

The Dept. of Photography students conducted a creative photoshoot drawing inspiration from lightning bolt, werewolf and the indomitable Joker respectively. They took liberty to create a version based on their own interpretation of the looks thus providing an interesting twist to the characters.

Halloween day was a very memorable and enjoyable day at JD for everyone as it let the students think beyond their imagination and let their creativity run wild. Further, celebrating global festivals helps to encourage students embrace different cultures. The attention to detail, the makeup, and the way the photographs were captured were all a testimonial to the students’ sharp wit. 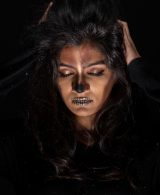 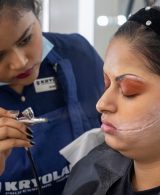