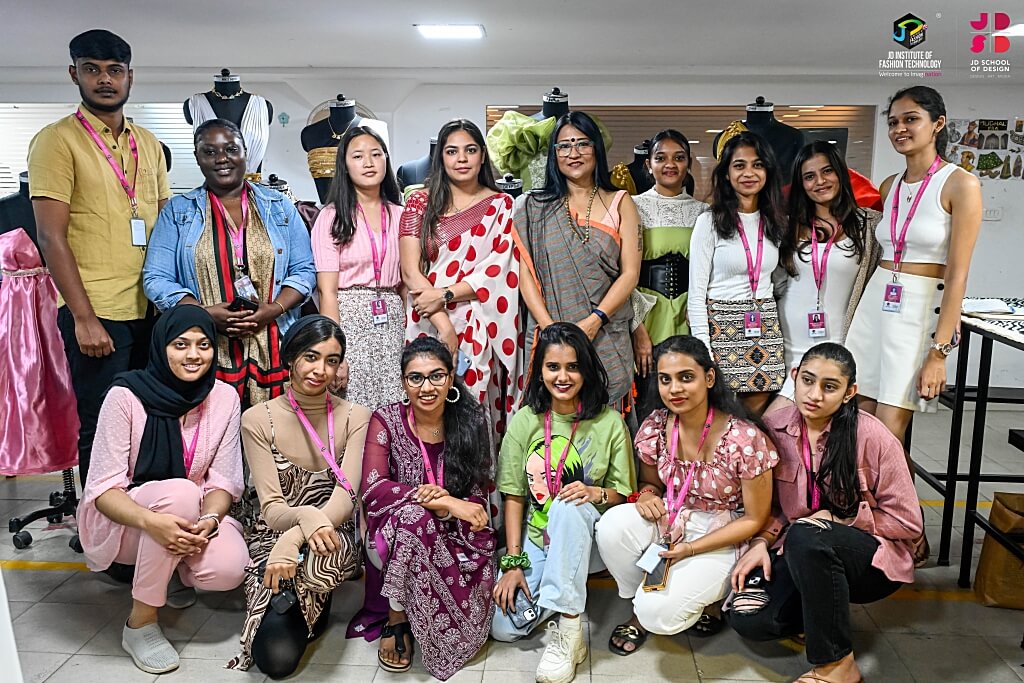 ‘Time travel’ was explored through the various fashion eras in a display organized by the students of Diploma in Fashion Design November A 2022 batch on 13th January 2023. The presentation covered the modules on Art and Costume Appreciation and Draping.

Practical aspects are an integral part of the learning process. It gives an opportunity to the students to bring out their creativeness and knowledge regarding the modules. This gives them a hands-on experience on executing an idea from concept to final output.

The students were asked to time travel and choose an era. They were instructed to make use of draping on the mannequin which was prominent during that particular time. The topics covered during the display were, ‘Roaring 20s’, ‘Prehistoric era’, ‘Victorian era’, ‘Regency era’, ‘Egyptian era’, ‘Roman era’ and ‘Greek era’. Going by the guidelines given to them, the students used the best of their knowledge of draping they learnt in the class. They gave their personal touch but retained the aesthetics of the said era.

The students also prepared process books which was a documentation of the design sketches, printouts, facts etc. This helped the viewers to get a wider understanding of the time travel display.

The following are the list of eras through the medium of time travel covered during the displays by the students: 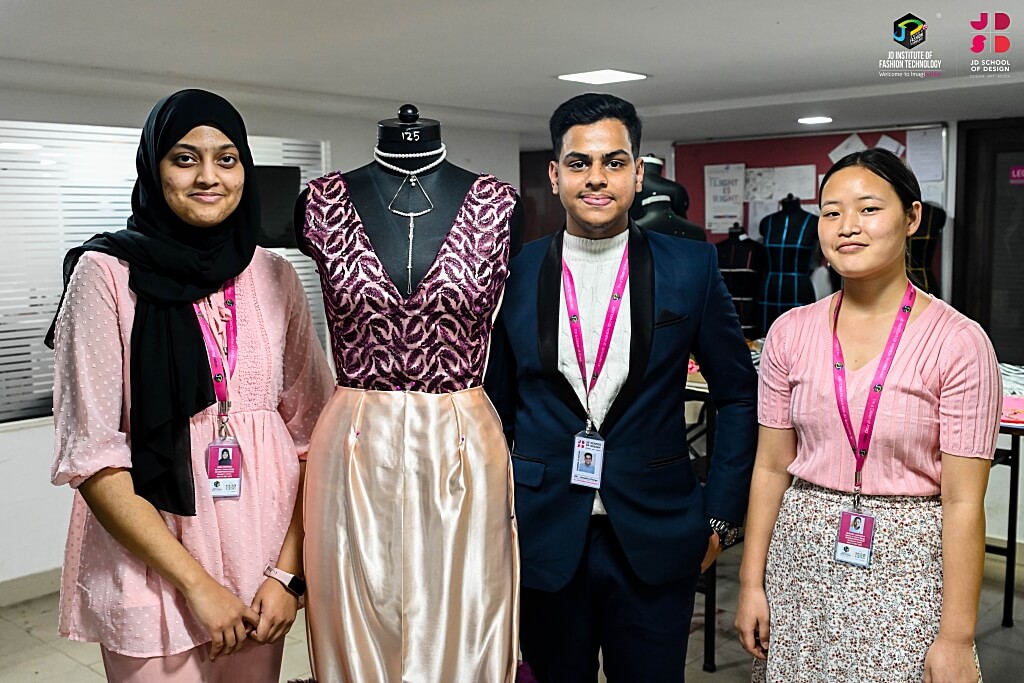 The Roaring 20s refers to the 1920s decade in music and fashion. It was an era of rapid change and the development of modern art. Women started going out to parties. Uzma and Shahen were inspired by the glamourous style and incorporated the ruffles to their draping.

Whereas for Art and Costume Appreciation (ACA) they created a model of a glamorous party in the 20s which was highlighted with gold curtains and miniature models dressed in fringe dress and ruffled dress. 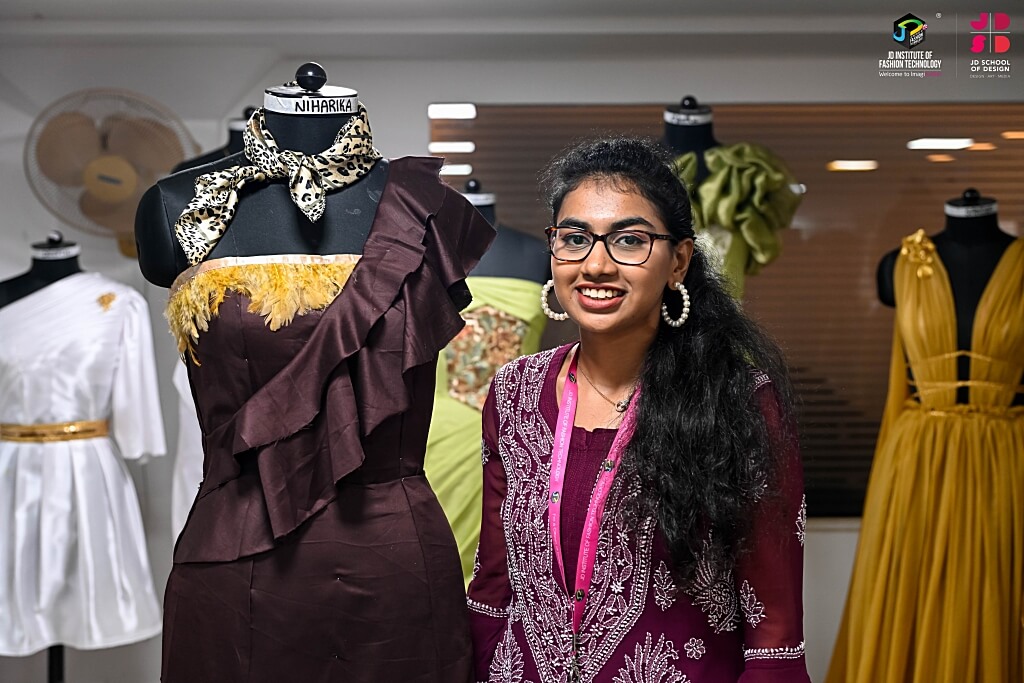 In the Prehistoric era, humans donned animal skins sewn or knotted around their bodies. Niharika was inspired by the prints and incorporation of natural elements in the costume. She tried to recreate the same in her draping. The pattern included princess cut, ruffles, feathers, etc. There was an element of animal print used as an accessory.

For ACA, she had her miniature model don an animal print dress surrounded by nature. 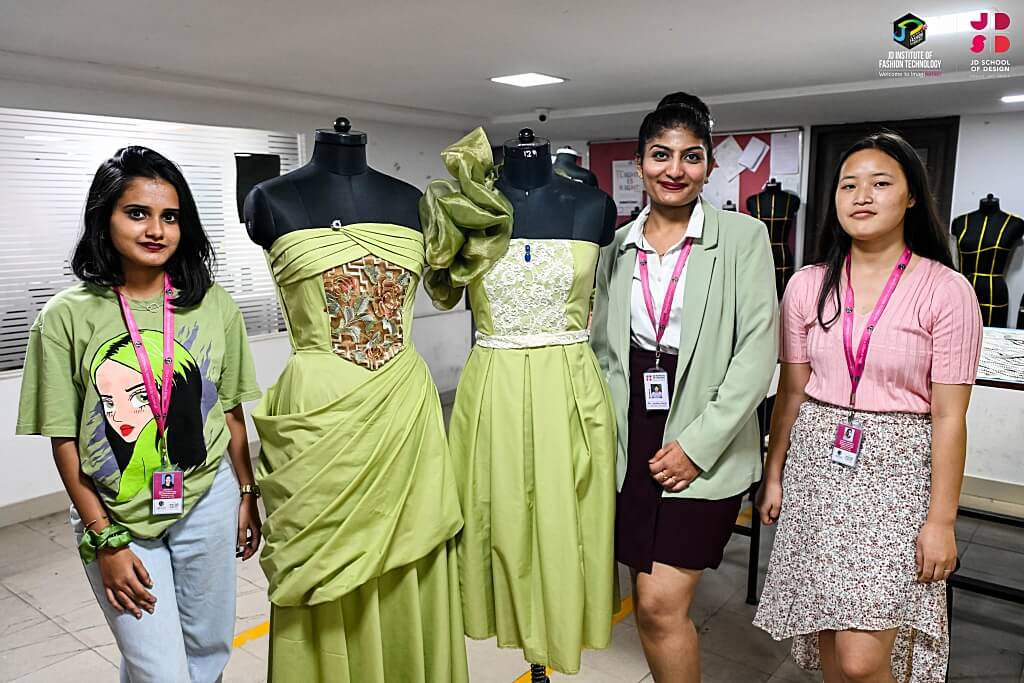 The fashion in the 19th century is known for its corsets, bonnets, top hats, bustles and petticoats. Women’s fashion during the Victorian period was largely dominated by full skirts. Neethu and Aishwarya were truly inspired by the fitted bodice of the Victorian era and draped the mannequin accordingly. The two drapings involved – ruffled neck with print at the centre and off shoulder with pleats and pattern with some embroidery at the centre. 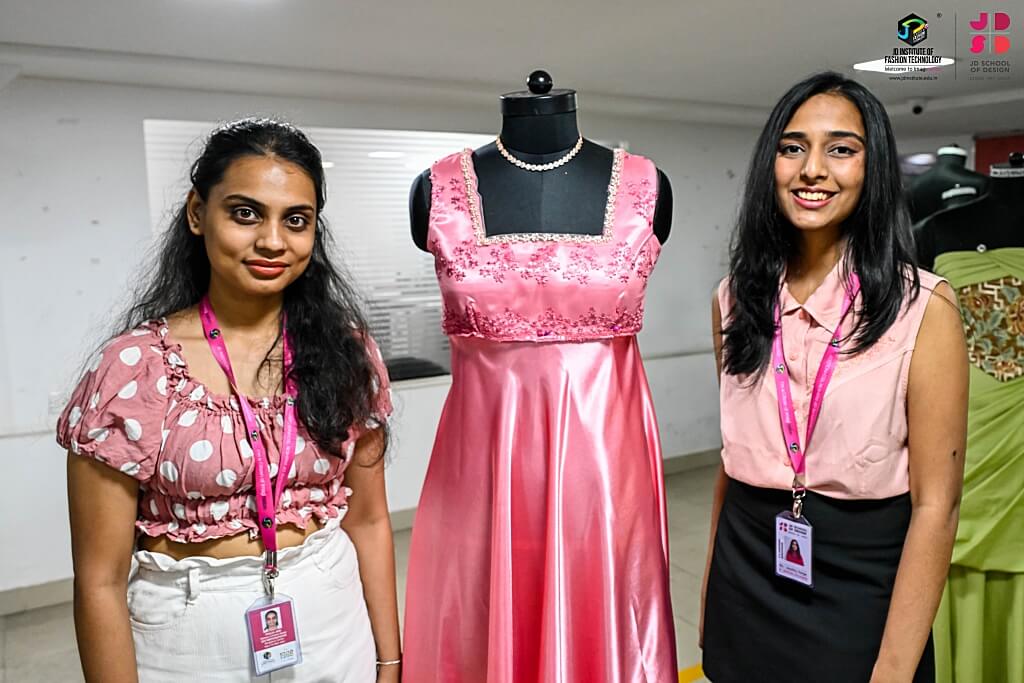 The Empire silhouette was the key style in women’s clothing during the Regency era. Inspired by this Pooja and Astha, set up their display in a ballroom style, where the garments were loose fitted with empire waistline. Along with these, embroidery and pearl were the key elements. They created a square neck for one mannequin and broke away from convention with the other by giving it a deep neckline instead of the closed neckline associated with the times.

For ACA they recreated a set-up that was designed to match the Regency era along with two miniature models in ballroom gowns. 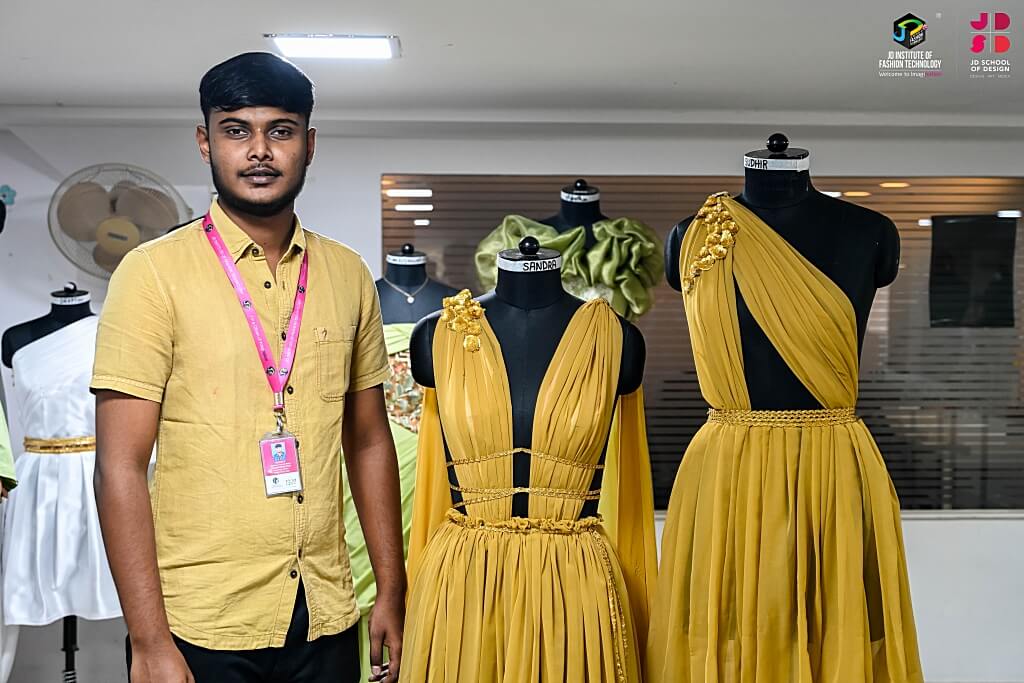 The fashion in Egyptian era was based on status. The higher-class wore long  dresses while lower-class wore shorter dress. Aimekisha Sandra and Sudhir tried to incorporate the same in their draping by keeping the length of the dress in mind. Gathered dress pattern was dominant in this draping style showcased by the students. The dresses for the miniature models for ACA were also fashioned in the same manner as the draped mannequins. 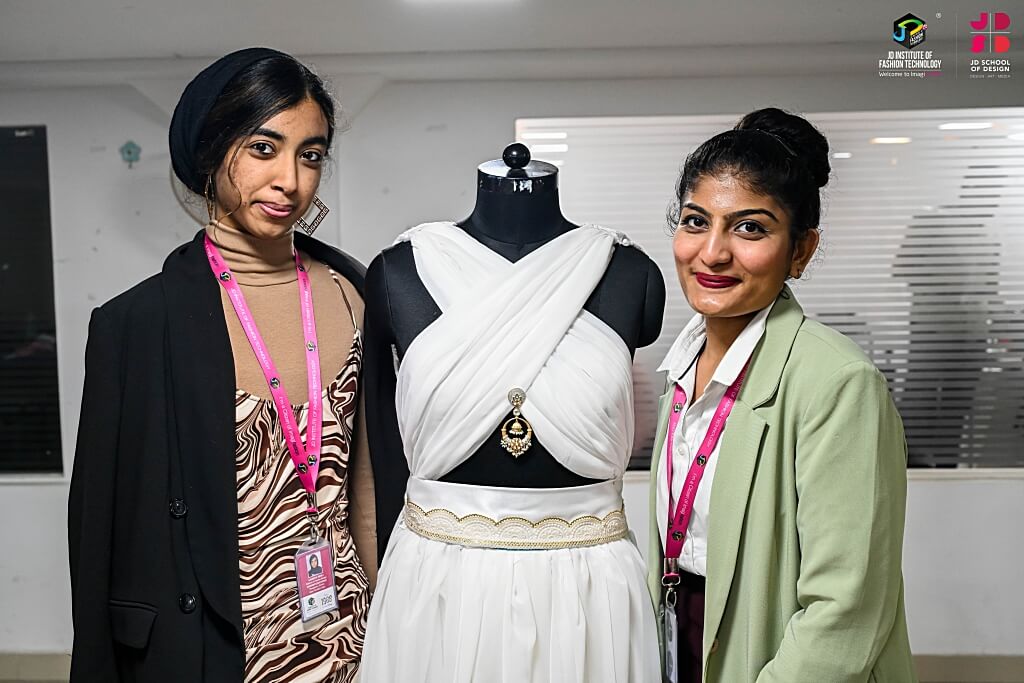 The Roman era was explored through the usage of red and white colours in the display by Sameen and Bhavya. The white is symbolic of the priestesses in Ancient Rome of the goddess Vesta and the red was worn by gladiators, embodies courage. The amalgamation of red and white creates a symbolism of pure courage. They have interpreted the clothing of the Roman era with a half-saree and a gathered dress with a long trail. Gathering method is prominent in both the designs.

ACA was depicted with the interlinking of white on red for the miniature mannequin against the backdrop of The Colosseum found at the centre of the city of Rome. 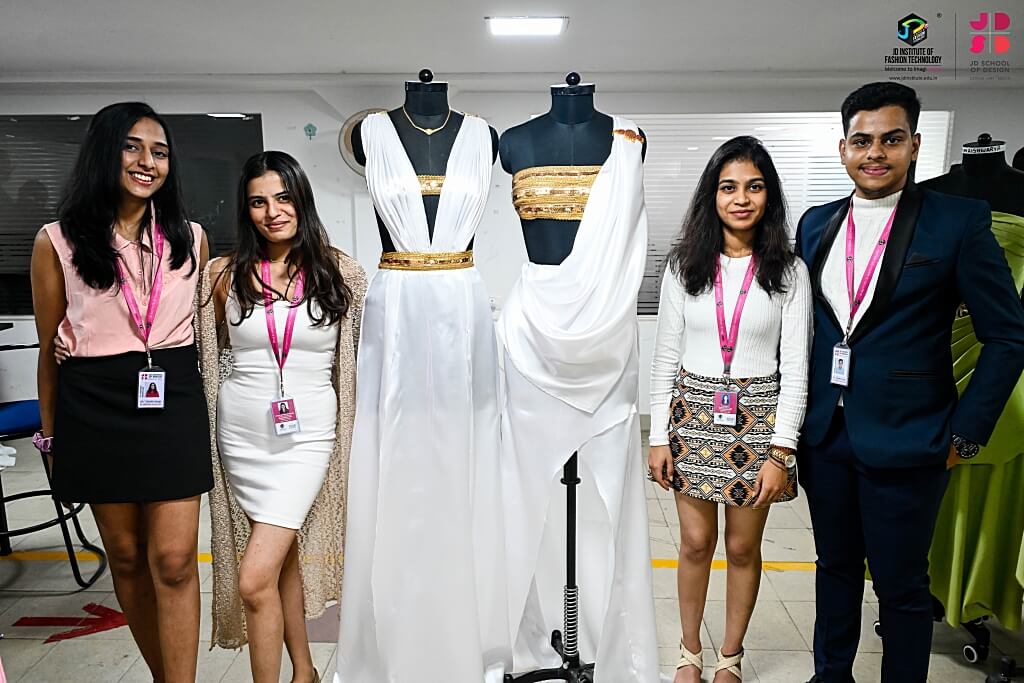 Deepthi, Bhavana and Hrithika sought inspiration from the Greek era. They have used panels in their silhouette. They have displayed two styles, one that is part of the Greek era and the other with a modern touch.

For ACA, the miniature display had three models in three different silhouettes – a short tube dress, a long gown cinched at the waist and cross necked blouse with a long skirt.

Time travel was an interesting take on the fashion eras. The students also shared their experience about the modules and the learning outcomes that they derived from it. For few it was about the draping that excited them as they got to explore various eras and play with the silhouettes. While for others it was the historical references associated with the module which they liked the most. The overall practical part of bringing to life a moment in history made it an interesting endeavor for them. It provided an insight for the viewers to get a glimpse of the students perception in a visual format. 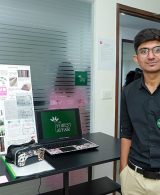