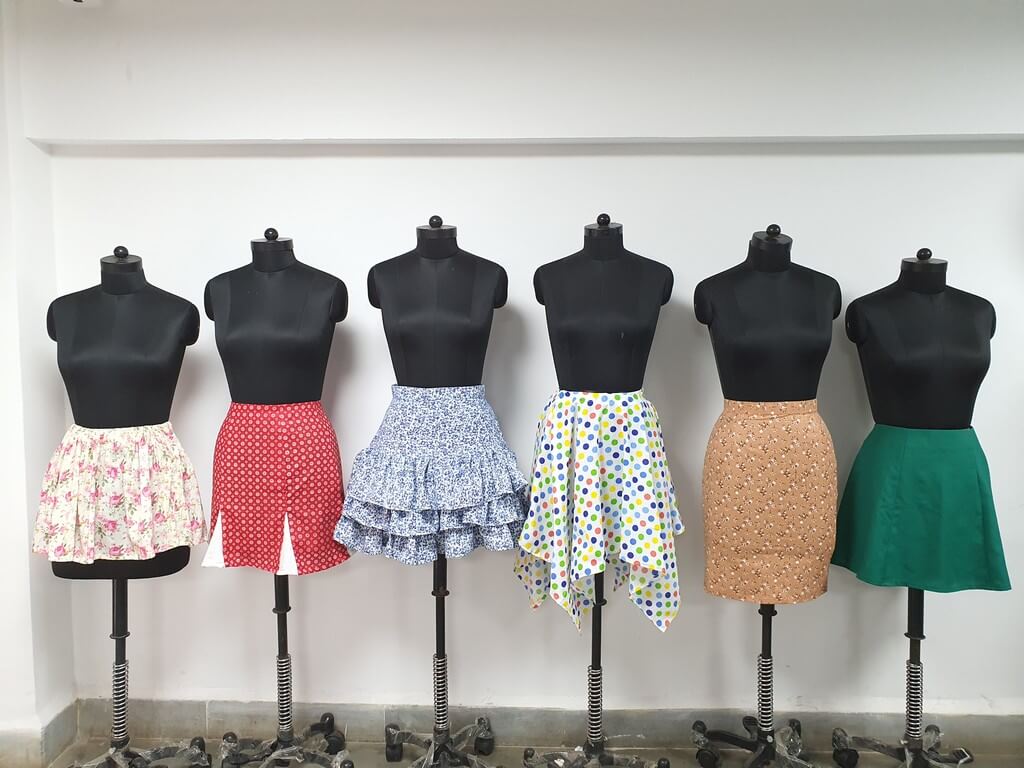 Skirts were showcased by the 2nd year students of BSc. in Fashion and Apparel Design and Advanced Diploma in Fashion Design as part of their Pattern Making and Garment Manufacturing III module.

Skirts have been worn since prehistoric times as the simplest way to cover the lower body. A straw-woven skirt dating to 3900 BC was discovered in Armenia. It was the standard attire for men and women in all ancient cultures in the Near East and Egypt. In modern times, skirts are typically worn by women. Some exceptions include the Izzar, worn by many Muslim cultures, and the Kilt, a traditional men’s garment in Scotland, Ireland, and sometimes England.

The hemline of skirts can vary from micro to floor-length and can vary according to cultural conceptions of modesty and aesthetics as well as the wearer’s personal taste, which can be influenced by such factors as fashion and social context. Most skirts are self-standing garments, but some skirt-looking panels may be part of another garment such as leggings, shorts, and swimsuits.

Listed below are a few types of skirts:

A Gored skirt fits through the waistline and flares at the hem. It can be made of four to twenty-four shaped sections. These panelled skirts with areas of texture, provides an A-line outline or silhouette.

In the featured image, the petticoat skirt design is a framed skirt. The flare can begin from thigh-length or even knee-length to give the skirt extra fullness. The Gored skirt dates back to the 14th century and was much used in the 19th century. It became very popular in the late 1860s, mid-1890s, early 20th century, 1930s, 1940s, and to this day is worn as a classic skirt style.

A godet skirt (go-day’) or dress consists of triangular pieces of fabric inserted upward from the hem to create more fullness. Popular in the 1930s the inserts create a flare around the hemline. The pattern resembles a mini A-line wedge with a circular top. More the pieces of inserts, the fuller the flared hemline becomes.

A Straight skirt or Pencil skirt, is a tailored skirt hanging straight from the hips and fitted from the waist to the hips by means of darts or a yoke; may have a vent or kick-pleat set in the hem for ease of walking. Pencil skirts were designed to be straight and narrow. They do not have any type of flamboyance about them and they are oftentimes used more for business attire. Pencil skirts are skirts that fit the wearer’s body closely and can be considered tight. Very seldom are pencil skirts worn as a casual type of skirt, but they hold true to their design

The gathered skirt is a very simple style. These types of skirts are gathered at the waistband. The fullness of the skirt is determined by the amount of fabric that needs to be drawn together around the waist. The assembled skirt can be any length from short to full length. It is best in fine to medium weight fabrics.

The handkerchief skirt is a fun to wear skirt with hanging points, as the shapes of the handkerchief are attached and lowered from the waist. The fabric is cut into a rectangular or square shape to achieve this look. Soft fabrics are an ideal choice for this skirt type, otherwise the points will stand out, adding unnecessary volume to the skirt.

A ruffled skirt will have the same ruffles throughout the skirt or will be directed towards the bottom of the skirt. This creates a fun, smooth and daring appeal. Ruffled skirts are available in all shapes and sizes and can be worn casually, semi-formal, like party outfits, and less often – formally. Ruffled skirts are often worn as a dance outfit. The most common are long ones, up to the ankles, but can be much shorter, also on the upper thighs.

Using the yoke effect on the top and on the waistband creates a subtle look for the yoke skirt. The yoke hugs the figure, and the skirt gathers or brightens on the yolk to complete the design. The yoke may be narrow or much wider and cut along the curve, so that there is no need for the darts to shape at the back.

Understanding construction of Skirts is important as a well-tailored fit depends on the pattern drafting integration of dimensions for various shapes, contour and proportions. Pattern Making and Garment Manufacturing module helps students develop skilled practice. Thus, mastering the technique behind each pattern ensures that garments are made to specification with a minimal margin of error. 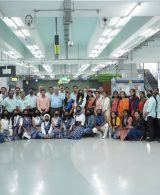 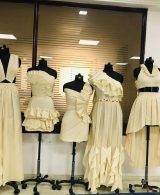