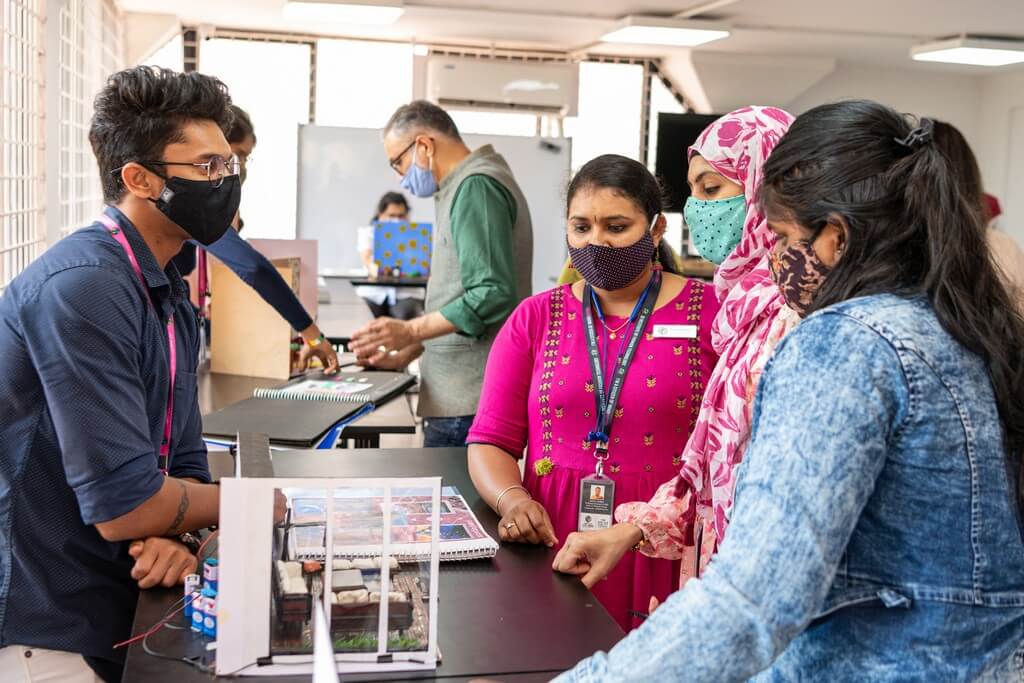 Wall textures are used widely in interior designing as it provides a unique look to a particular interior space that is being designed. Textures as known, are the visual and physical feel of a design that will provide a different outlook on a design. Similarly, a texture that is applied to a wall is done so to bring the desired feel and look. 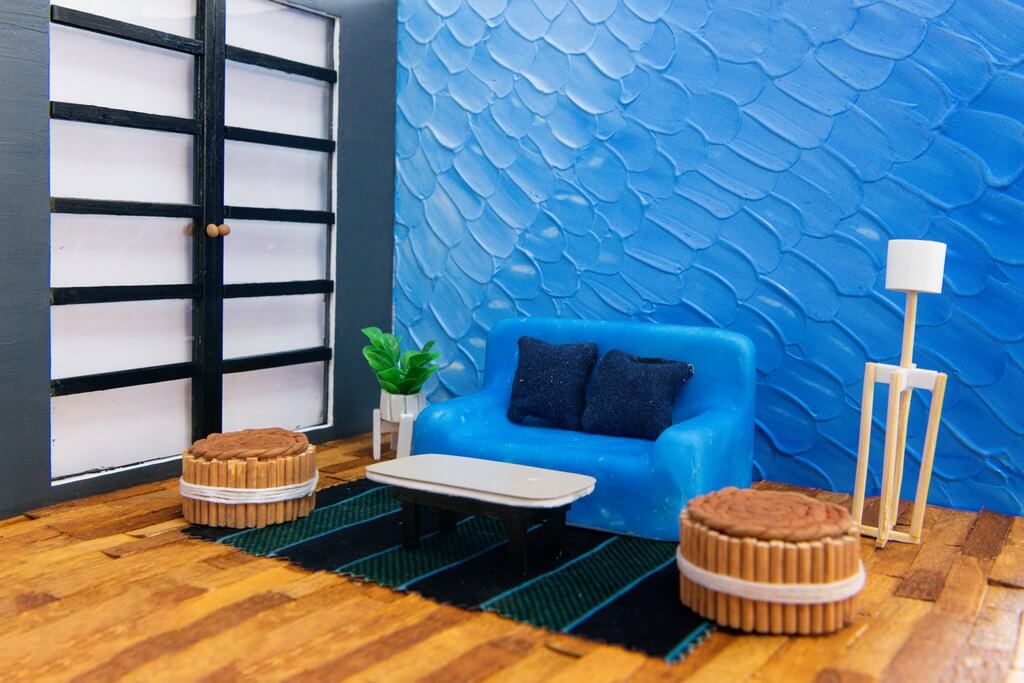 Wall Textures: Inspired by water and water ripples, Ms. Deepika jain has created the wall texture with the help of POP and glue

The students pursuing their undergraduate in Bsc. in Interior Design and Decoration, the batch 2020 were given the opportunity to display interior designing prototypes of wall textures. This interior designing display was initially a part of their color theory module, that educated and imparts knowledge on how colors can adn are to be used in a particular space that is provided to them. 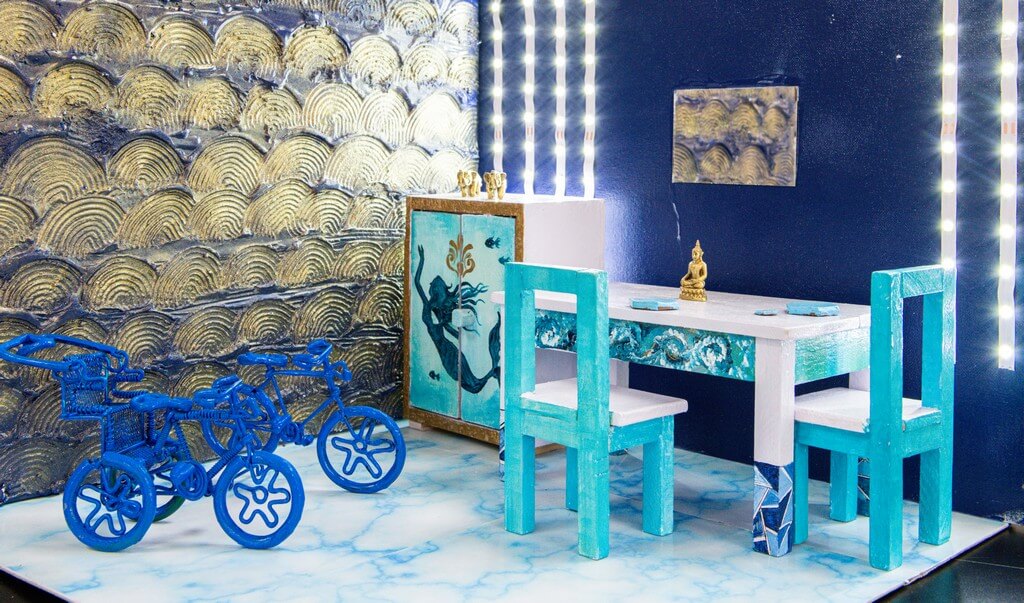 The color theory module in the BSc. in Interior Design and Decoration is split into multiple concepts that educate the aspiring designers on color theory, color scheme, color psychology, so on and so forth. Although this module has previously had many interior designing displays as a part of the module, this is the first time the students were given the choice to choose between just working on a canvas with their colors in the form of a texture or to research the color schemes, pick out an inspiration and work with the colors chosen in the form of a prototype where they would add this textured wall in am interior space that is to be designed. 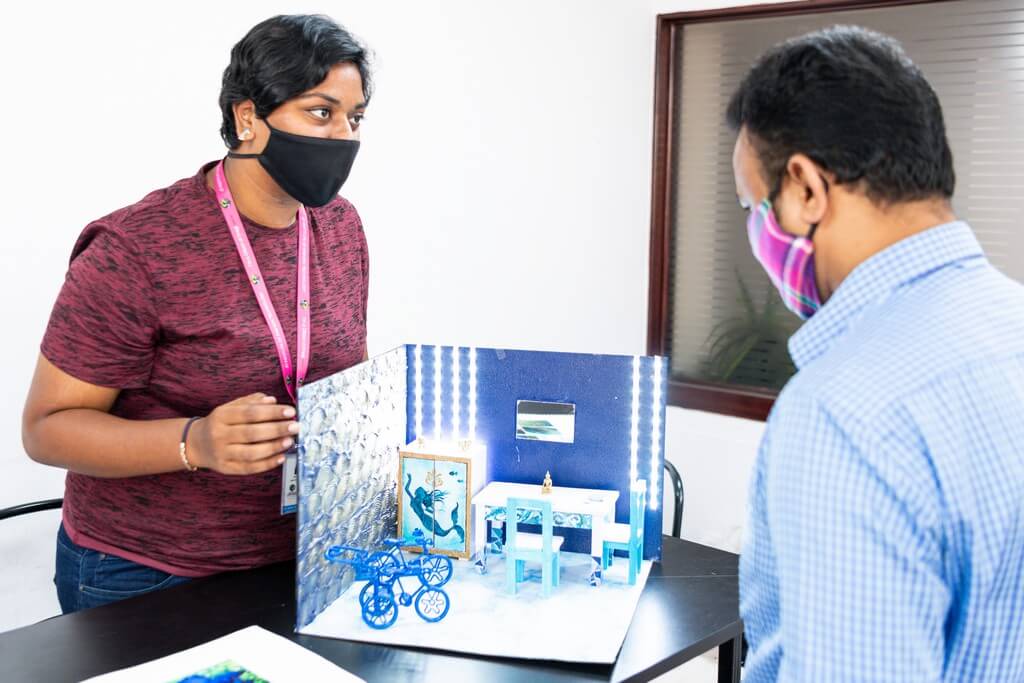 Wall Textures: Ms. Rachitha B explaining her prototype of the wall texture to the faculty Mr. Vijay

Taking this opportunity, the 16 students who participated in the interior designing display had put in 100% to make sure their prototype was out of the box. Colors Module is a really simple yet important concept in any creative field which helps in making sure the designs that are being curated are neat and clean with the client requirements. Inspirations from clouds, to festive colors of holi to fish scales. The materials that were commonly used among the students was canvas and POP to create the desired and inspired texture. 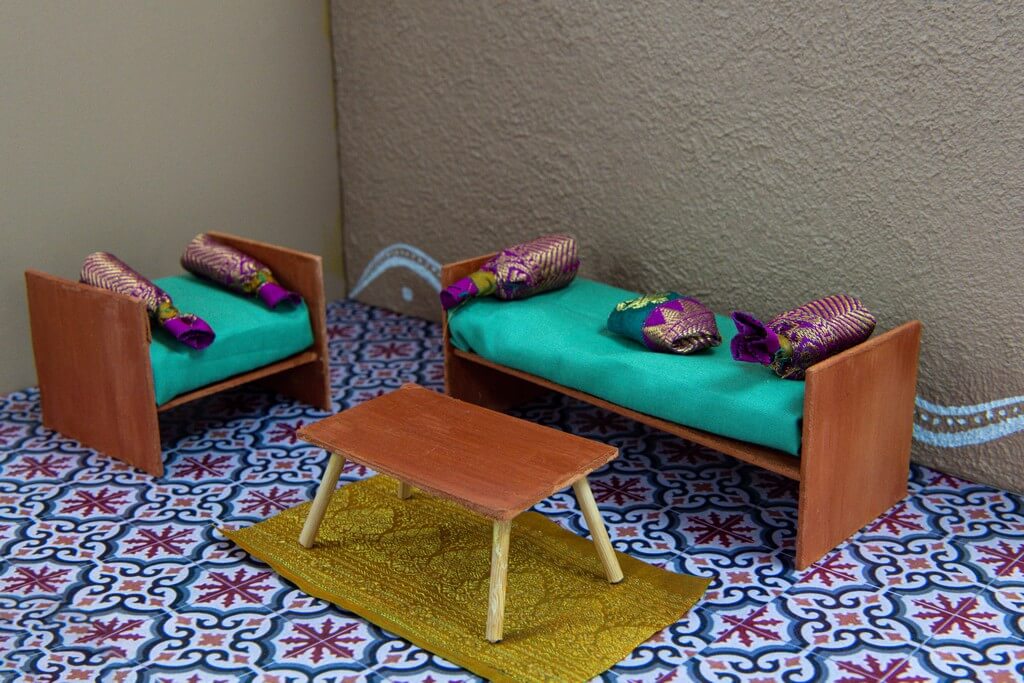 Wall Textures: The inspiration for this wall texture is ‘Kolam’ which is the TN traditional name for Rangolis. She created this with the help of POP

Among the 16 prototypes, one took the whole show on a gasp. It was the interior designing  display by Mr. Abhishek M S whose inspiration was the mountains, Swiss Alps. He was inspired from the visual texture that was seen when seen from a distance and how the snow added a rustic yet elegant look to the overall visual. He created the wall texture in a monochromatic color scheme of neutrals. His prototype was the design of a living room space with furniture that were inspired from industrial products. The prototype was made using POP ( plaster of paris), canvas as the base for the wall, acrylic paints, spray paint, ice cream sticks, fabrics, cotton, pipes, and serial lights that were powered by double batteries. 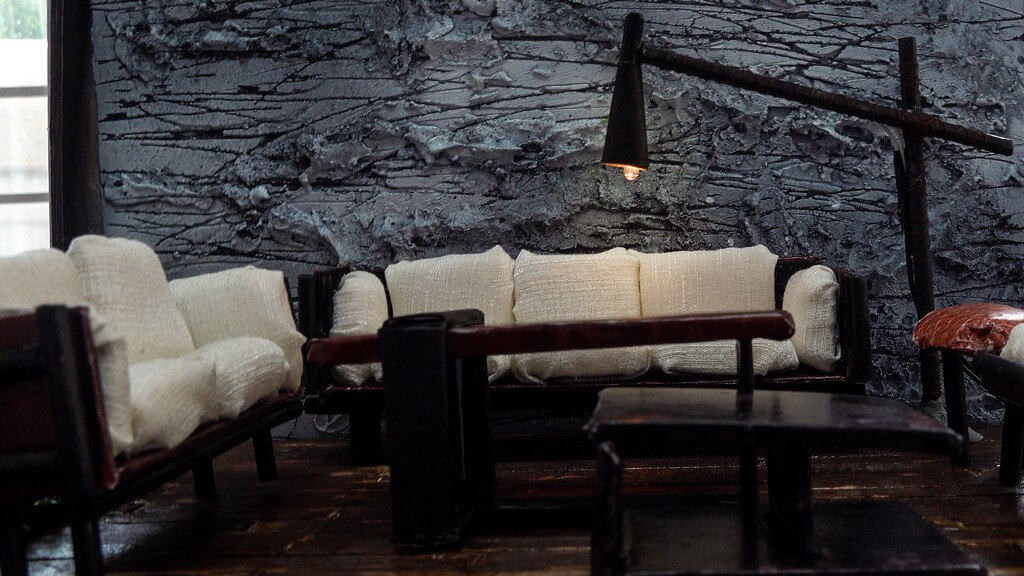 Wall Textures: This was the best product display at the exhibition was done by Mr. Abhishek M S, whose inspiration was the Alps Mountain

He used the canvas and POP to create his textured wall which was the highlight of his prototype, the ice cream sticks for the flooring, fabrics for furniture cushions and seatings, printout of wooden textures to portray the wooden furniture effect and the serial lights to create the lighting ambience of the interior space that he designed. He also used many other materials in small areas of his design to give it the complete effect of a properly curated living space. 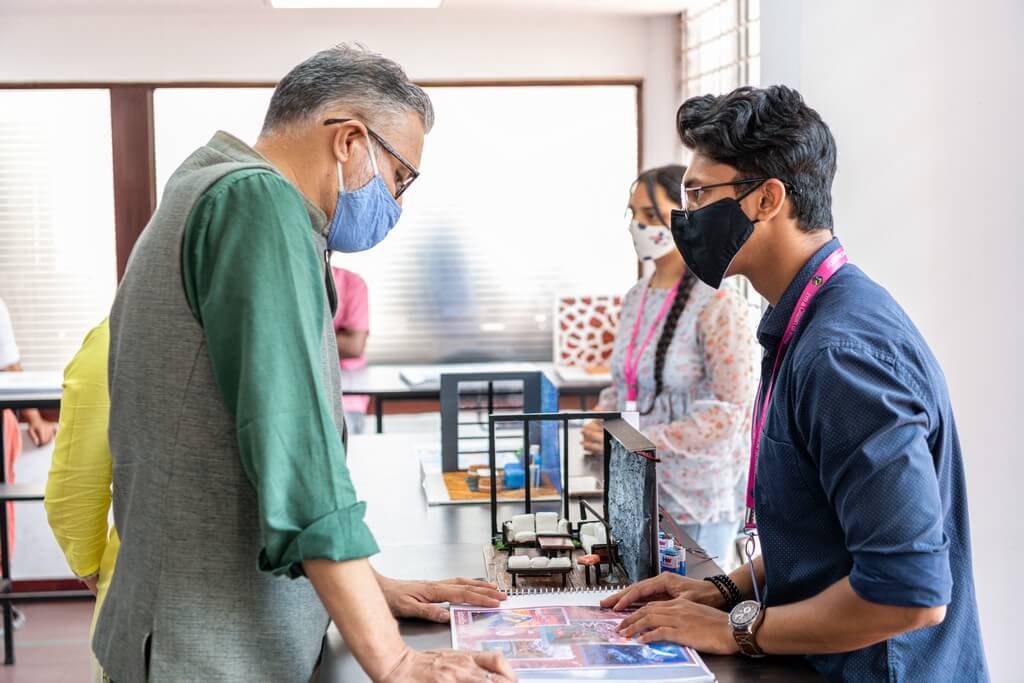 Although Mr. Abhishek’s display was one among the best, the other students’ displays also had their uniqueness too. 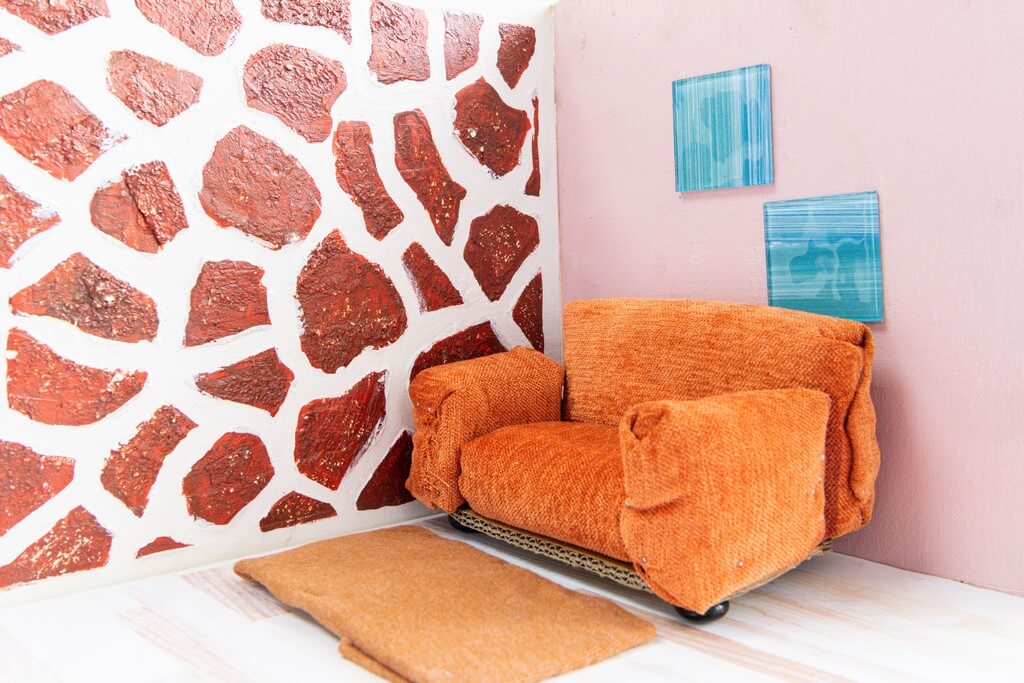 Wall Textures: This model was done by Mr. Shreeharan who was inspired by the skin of the giraffe 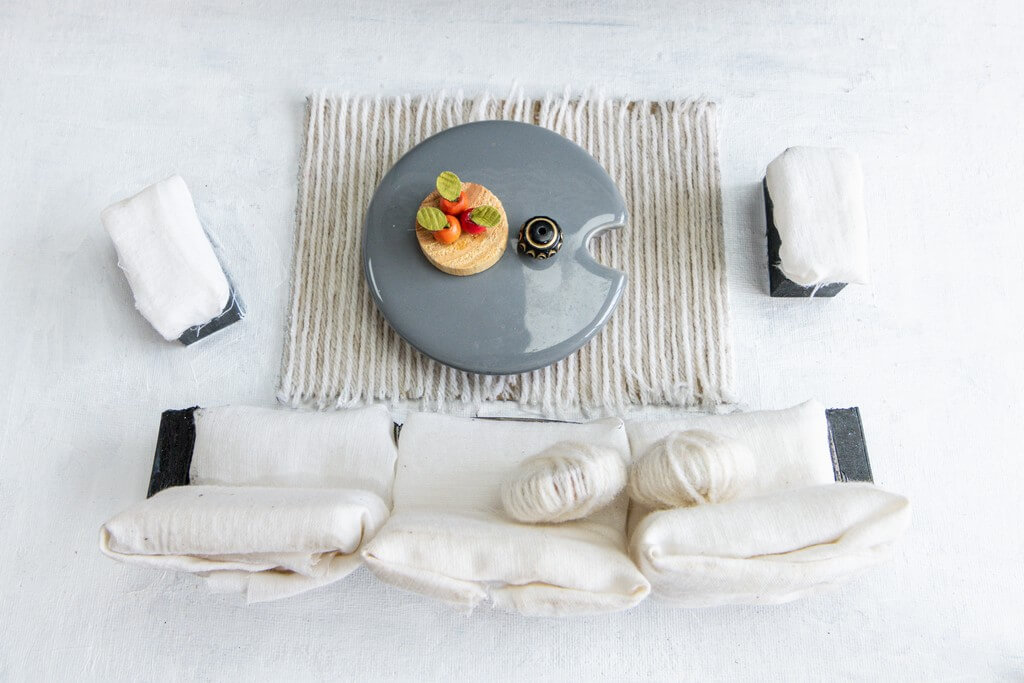 Wall Textures: This prototype was done by Ms. R. Abhirami  whose inspiration was the Mandala Art

Wall textures are used widely by most new home owners, as each texture is unique and gives a definition to the space, whether it is an interior space in a home or a commercial space such as a cafe. Every texture portrays a visual representation of the brand or owner. Through this exercise, the students were given an opportunity to explore different raw materials and different textures and create an inspired prototype. This exercise has also helped students understand the career options that they can choose within the interior designing industry, such as a color consultant. It has educated them in the application of colors in a given interior space according to the client requirement. At JD Institute, every student is given multiple opportunities within and beyond the campus to showcase their creativity and innovation in their field of study. 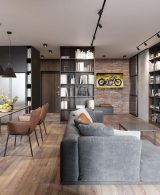 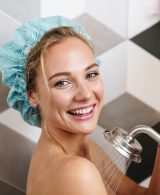