Neal Royan Batch of 1996, Coming from a family where mom is a teacher and dad an engineer, Neal was under a lot of pressure to take up engineering. But, as they say, a creative itch cannot be ignored for too long. Not the one to succumb to pressure, he successfully convinced his parents that his true calling lies in the creative world. And, with this unrelenting passion for creativity, Neal came to JD Institute of Fashion Technology, Bangalore to pursue a career in fashion & clothing. Since then there was no looking back.

He started a small business with a friend Russell. They bought export surplus fabrics from the street. And, designed and tailored waistcoats along with hand-painted shirts and women’s hair bands. All these sewn by a tailor that made a uniform for the Army school kids. They sold these products at school and college fairs, and yes, it was a big hit. From Madhu Sapre to Sushmita Sen, he has worked with some of the biggest names in the industry.

Today Neal is working with Gokaldas Images as a Vice President-Marketing. Prior to this, he was employed by a well-known name in Bangalore, Munish Hinduja, who owns one of India’s most recognised garment export companies. He is closely associated with the Denim industry. For ten years he worked with a 2 Million Euro house. He was responsible for creating new products and eventually business. In his own words, the colour of indigo and the nature of this living fabric energise him. His contribution to the denim business is widely appreciated and applauded.

Being associated with a number of well known international brands, Neal is looking at starting his own denim brand some day. And, we are sure his relentless passion for the industry combined with strong determination will help him achieve this very soon. 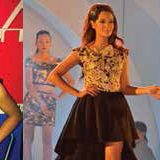