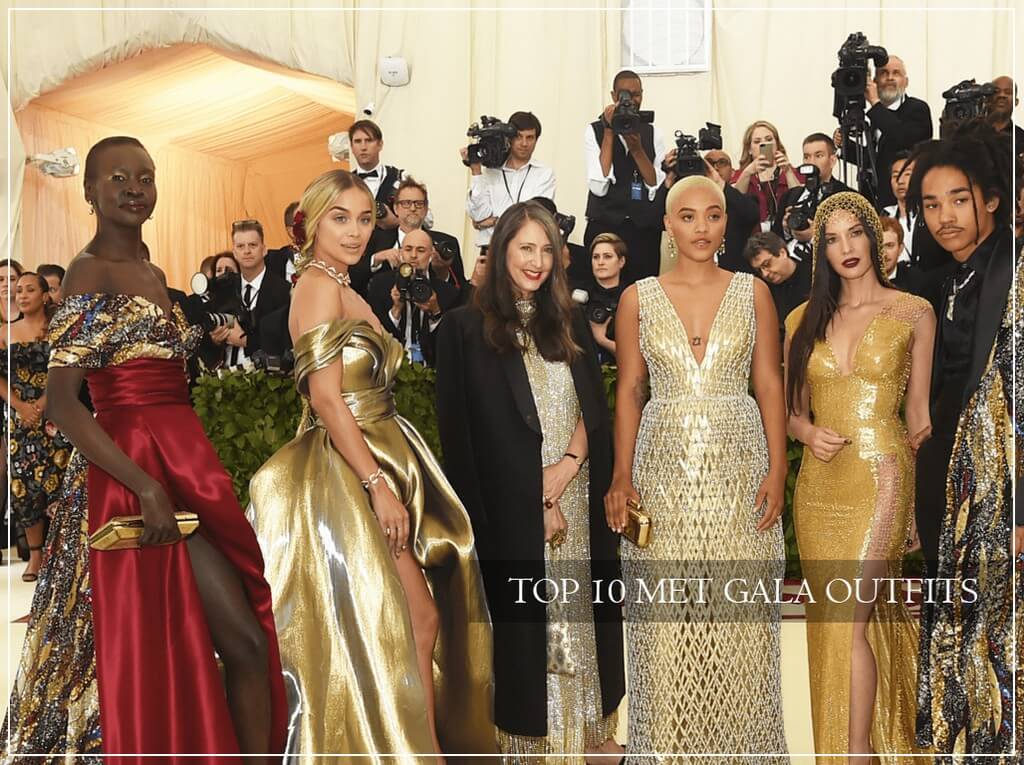 Met Gala is an annual fashion exhibit that is held to commemorate and mark the beginning of the Costume Institute’s journey. The history and significance of Met Gala is the reason for its growth and well known recognition in the fashion industry today.

Dianna Vreeland, is the founder of Met Gala, which is also known as the Met Ball and formerly known as the Costume Institute Gala. The present Vogue Editor in-chief and the Chairwoman of Met Gala is Anna Wintor, has been in her position holding up the fort and expectation of Met Gala each year, since 1995.

As we are closing towards this year’s Met Gala, which is said to be held on the 13th of September 2021, with the aim to show the world that, despite the losses the were incurred in with the on-going pandemic, American Fashion has not seen its final days, and does not expect to anytime soon. Supporting American Fashion, 2021’s Met Gala theme is ‘In America: Lexicon Of Fashion’.

Due to the on-going pandemic, the previous year’s (2019) was cancelled, to match up to that, this year’s Met Gala will be a two-part exploration. The first part will be themed as ‘In America: A Lexicon Of Fashion’ which will be held on the 13th of September, and the second part of this theme will be held in May 2022 with the theme ‘In America: The Anthology Of Fashion’.

Before the Met Gala 2021 takes our breath away with new and stunning costumes, let’s go back in time, and re-experience the best outfits of the 2019 Met Gala: 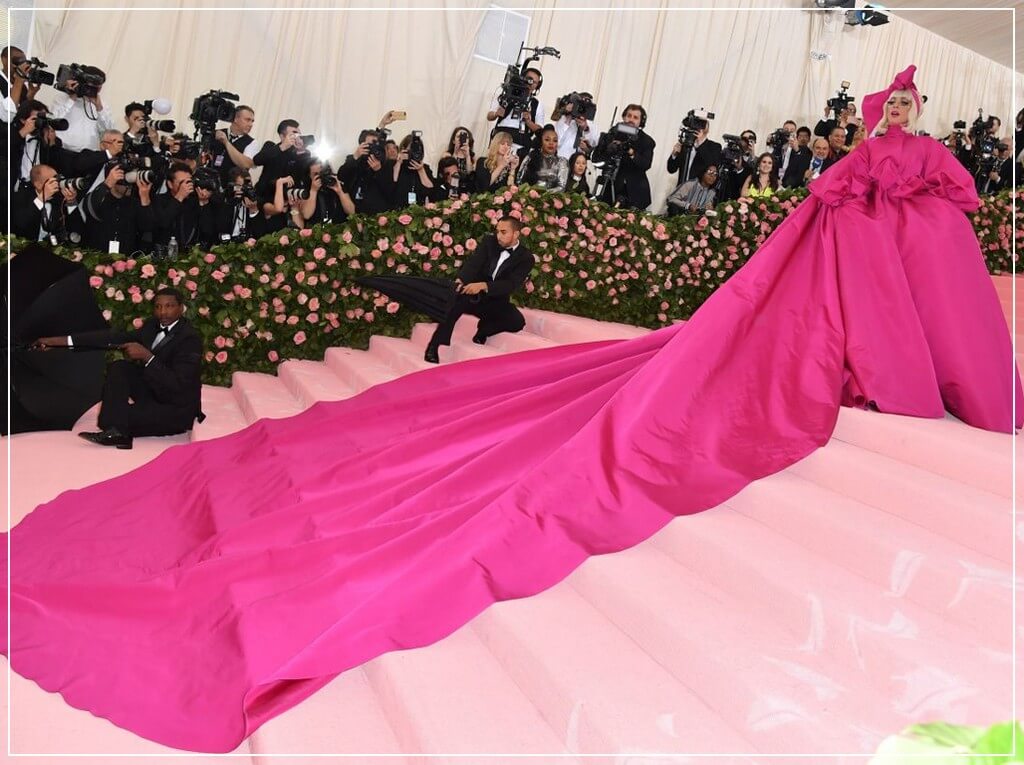 The Camp theme was created for Lady Gaga and she didn’t rest on her meat dress laurels—wearing 4, count them 4, Brandon Maxwell looks all at once (for a minute, at least). A giant pink gown with a doll-like bow, a black strapless gown, a pink slip dress with a giant cell phone, and finally, some very chic lingerie with sparkly tights. It was quite a way to kick off the carpet.

Kylie and Kendall Jenner in Versace 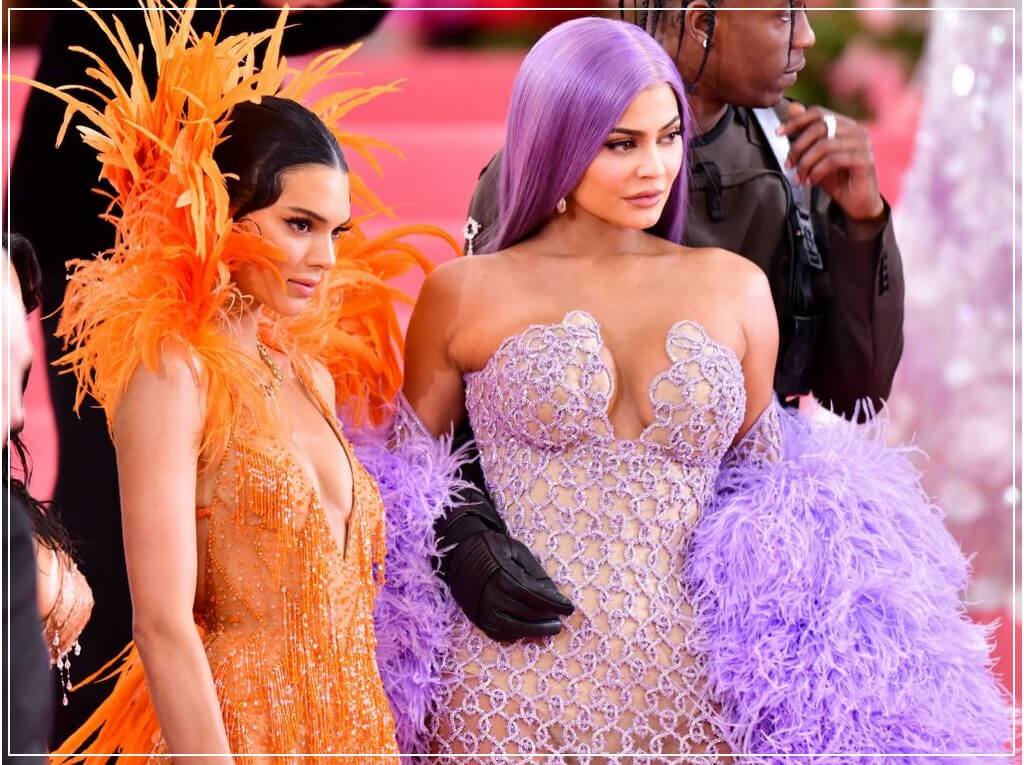 These two did not shy from the theme, looking like a cross of something between Vegas showgirls, Lil Kim, and as Kendall’s own Instastories pointed out, the Wicked Stepsisters from Cinderella. But make it fashion. 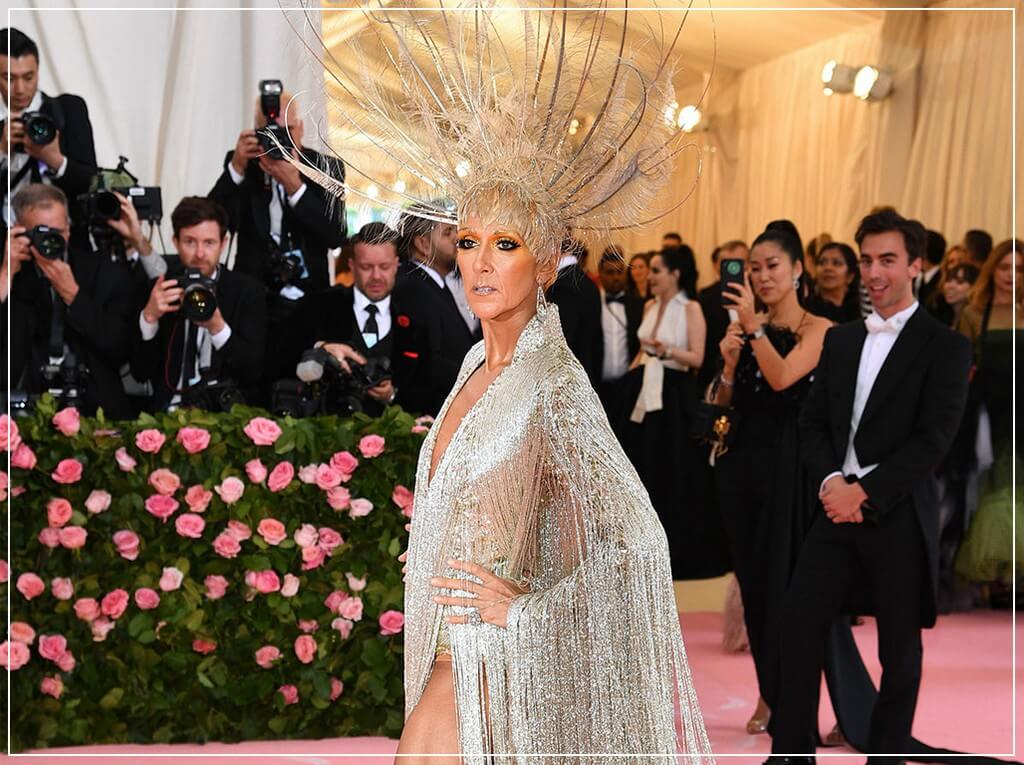 Hardly a stranger to drama, Dion wore a glimmering gown inspired by the glitzy costumes of the Ziegfeld Follies. The entire ensemble is constructed from 18 panels, hand-beaded by 52 master embroiderers over a total of 3,000 hours and weighs over 22 pounds. But somehow she’s owning all that dress.

Cardi B in Thom Browne 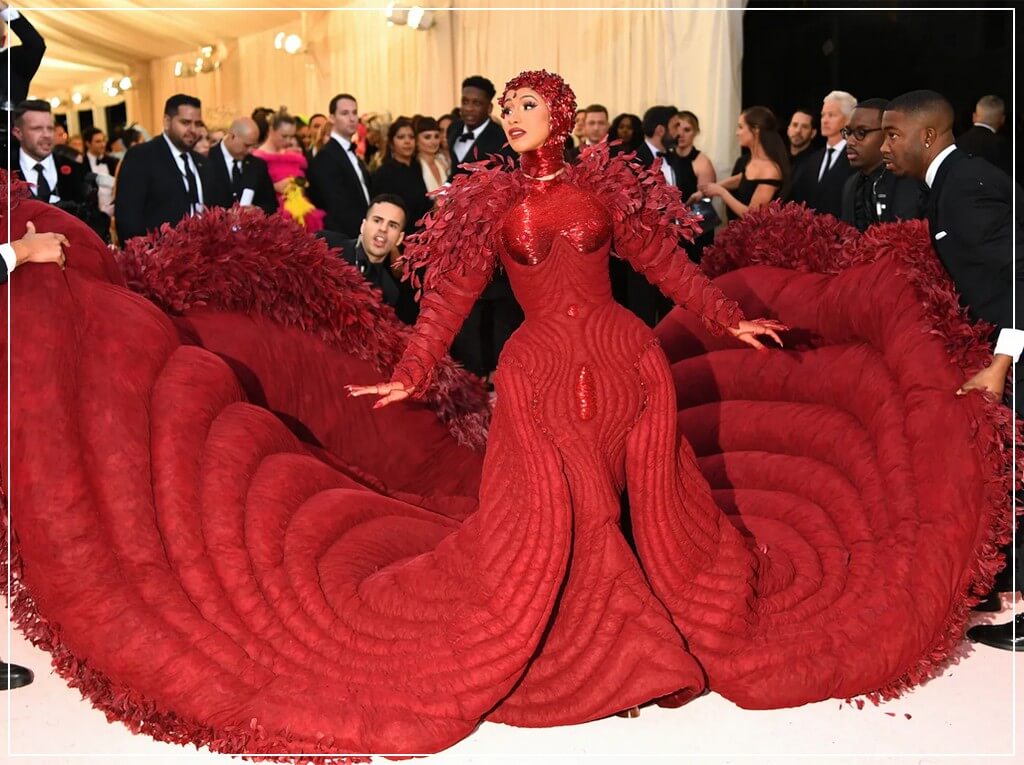 Because technically she wore about ten feet of tulle and silk organza of Thom Browne, topped with 30,000 burned and dyed coque feathers—all topped off with a Stephen Jones x Thom Browne hat. 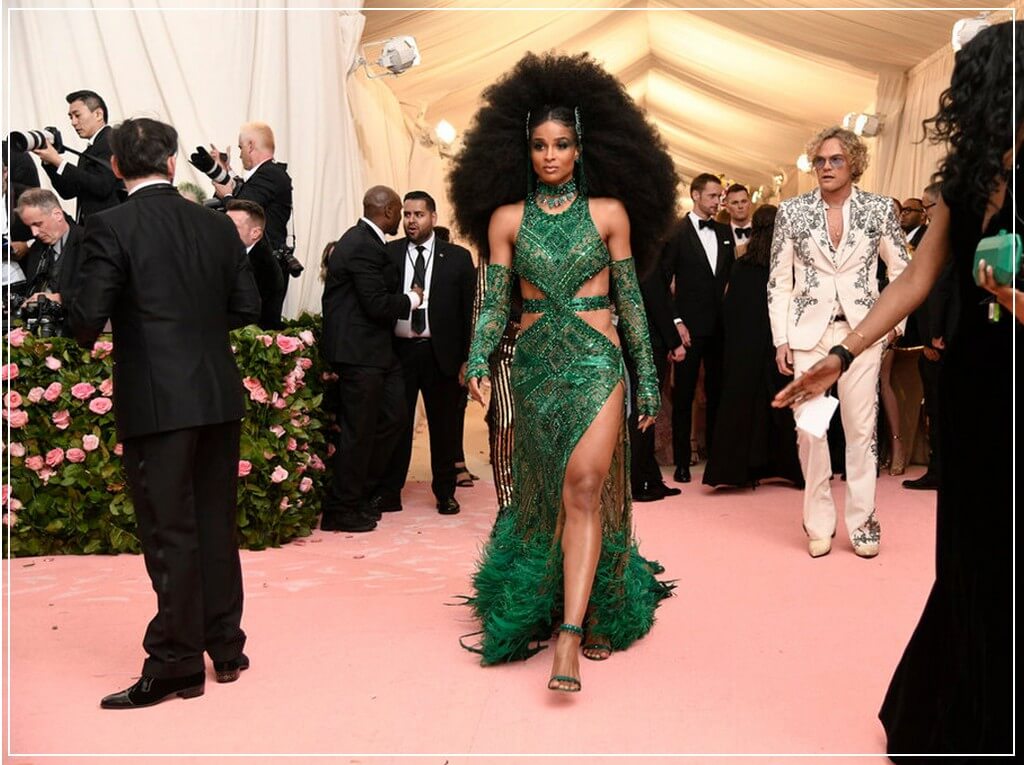 What’s not to love about Diana Ross disco-era hair and a green embellished gown with ostrich feathers paired with matching embellished gloves, belt and choker?

She pulled up in a Barbie car in a pink leather motorcycle gown and pink cat eye sunnies. This is what you call a moment.

Billy Porter in The Blonds 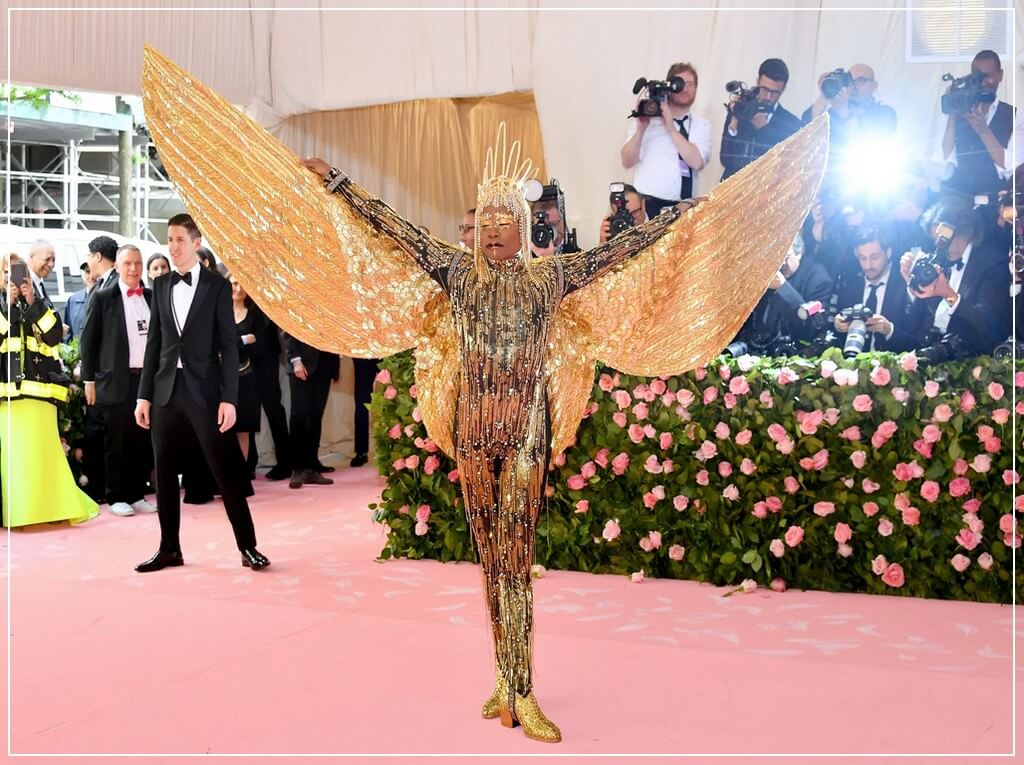 Truly, this man brought it, served it, lit it on fire, took a picture of it, hung it in a frame, and then brought it again. A true star in gold. 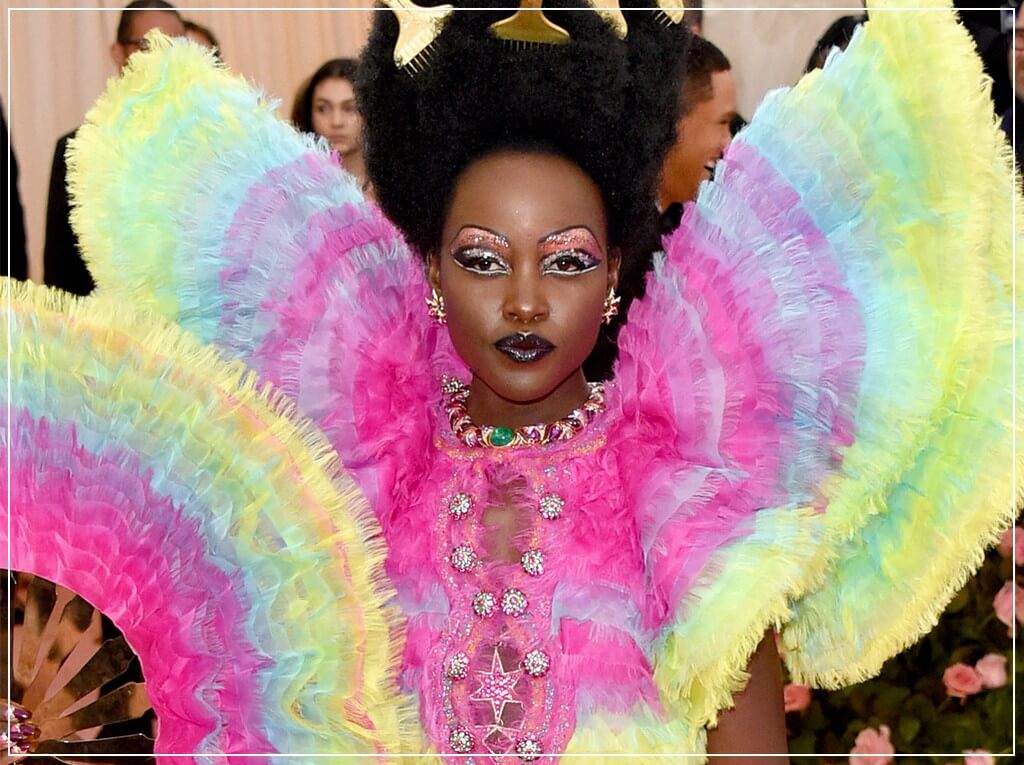 From her neon rainbow top, to her matching fan bag, the gilded picks in her hair, and pink star maxi skirt—no one can take their eyes off of this vision. 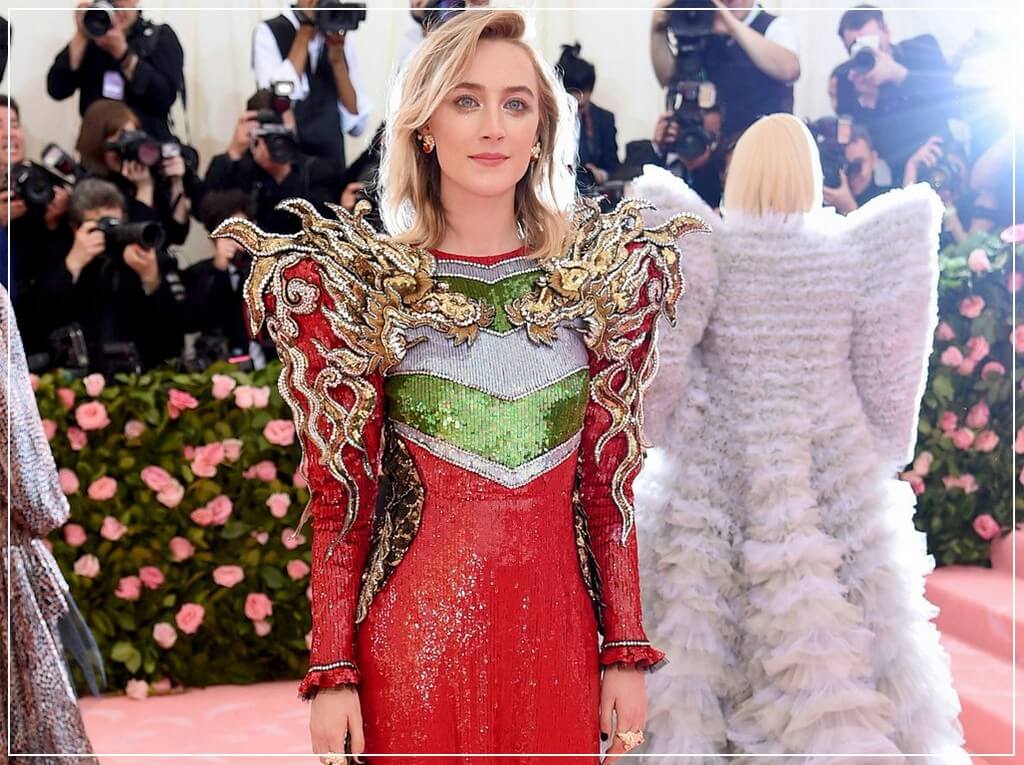 The brand was a sponsor of the evening’s event for good reason—Alessandro Michele’s Gucci has a unique grasp on camp. That place where fashion veers to the magical—this fire-breathing dress embodies it.

Met Gala over the years has brought to fashion enthusiasts and aspiring designers, great and fabulously charming costumes. But this year’s Met Gala is set with high expectations, as the theme is a revolutionizing theme for all the false rumours regarding the end of American fashion. Understanding and educating oneself on the importance of such events, only brings in more knowledge and exposure to the new world and ideologies of fashion. At JD Institute, the fashion designing courses encourage students to not only keep an eye out when such events are being held but also participate in events and showcase their work. 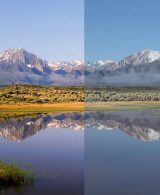 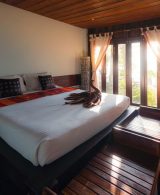