Temple Jewellery a must have for all seasons

Temple Jewellery a must have for all seasons

It’s said that 9th century was the start of temple jewellery, it started from the south during the reign of the Chola dynasty. It ruled the South Indian jewellery market until the 16th century during the reigns of great monarchs which included the Pandya dynasty, the Chola dynasty and the Krishnadeva Raya rule. Pure gold and silver and various other precious metals are used in creating temple jewellery to increase its lustre. Only experienced and talented goldsmiths and craftsmen were employed to craft temple jewellery accessories for kings, queens and people holding other important positions during these rules. It’s called temple jewellery as it was given as offerings in the temple by the royal people and mainly made to decorate gods and goddess in the temple, these jewellery are magnificent, opulent and had highly intricate. This jewellery gave a godly vide because of the artwork and the detailing which goes into it and gained a lot of popularity among women and is used by classical dancers to add divinity and uniqueness to their look. The temple jewellery is also considered auspicious and good luck, one of the reasons this rich tradition is still followed today, and women wear it for attaining a graceful appearance at bridal functions or other traditional occasions.

The main motifs which are used for the temple jewellery is God Ganesha and Goddess Lakshmi along with waves, line, floral shapes, birds, swans, lotuses, peacocks, royal figurines and these are beautifully designed and well embellished with precious and semi-precious stones, some are embellished with pearls, rubies, emeralds, diamonds, polki and Kundan stones which gives it a radiant look. Use of uncut precious stones gives a majestic touch to the outward show of temple jewellery. These jewellery were not just used for decorative purpose but also by a woman in the 9th century and over the centuries for various healing purposes, for instance, its said a rakkodi which is worn at the crown of the head cures migraines.

Lakshmi Inspired: It enhances the beauty of the necks and adds glory to the festive occasions. These ornaments also symbolize Goddess Lakshmi who is the incarnation of wealth in Hindu mythology.

Bell-shaped designs are most loved in earrings of temple jewellery.

Ganesh Inspired: Ganesh is considered as affectionate, strong and loyal god. This is because such a big head represents intelligence and wisdom. This could be the reason why people believe that wearing him as an ornament can bring wisdom and kindness.

Lakshmi & coin Inspired: The magnificent gold toned Lakshmi Devi inspired ornaments is something which grabs everyone’s attention, something to give you the much-required royal look. The ancient inspired handcrafted design is beautifully studded with rubies and has unblemished pearl drops.

Mango Leave Inspired:  Long chains are popularly known as harams in South India and some of the designs employed to increase the beauty of the chains include strings of gold coins, flowers, rudraksha stones and Hindu deity figurines. 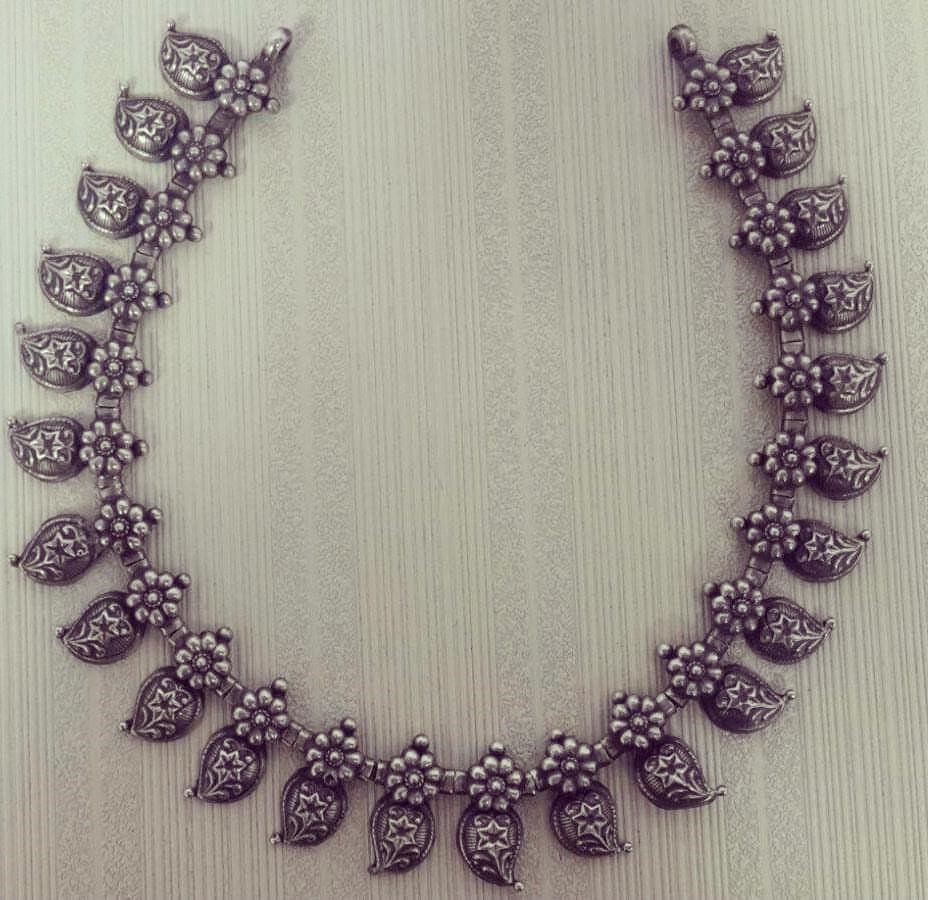 Elephant Inspired Gold-Toned Earrings: The gold-toned elephant inspired earrings gives you the much unique look, beautifully stud with a ruby stone and has floral details. These statement earrings are a splendid piece which makes you stand out, the ruby stone and the pearl drops adds the charm, completing the design. 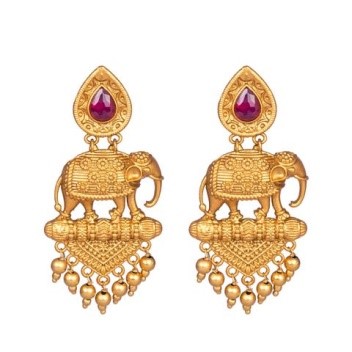 The Lotus Inspired Gold Tone Earrings:  The alluring lotus-inspired gold tone earrings is a piece of art which can be made as a statement, the intriguing work gives it the royal look making you feel like a princess. The queenly design has lotus-inspired based on goddess Lakshmi as the dangle, beautifully studded with rubies and has charming pearl drops. 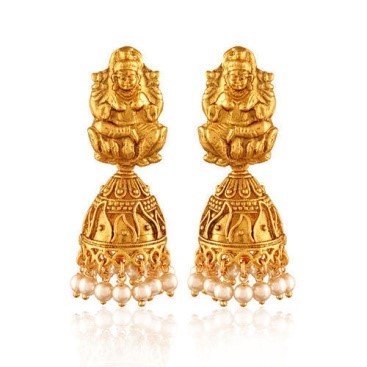 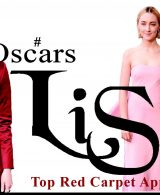 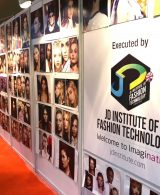